For his Executive Decision segment of "Mad Money" Tuesday, host Jim Cramer spoke with Emma Walmsley, CEO of GlaxoSmithKline (GSK) , the drugmaker that announced on Tuesday a partnership with Sanofi (SNY) to co-develop a Covid-19 vaccine.

Walmsley said the collaboration with Sanofi brings together two leaders in vaccine production, combining Sanofi's antigens with GSK's adjuvant therapies to create a Covid-19 vaccine that can be made at scale.

The world won't be able to return to normal until we have antibody therapies, vaccines and treatments, Walmsley noted. Until then, we'll likely all need to adjust to new ways of living and working.

Let's check and see how the charts of GSK are adjusting.

In this daily bar chart of GSK, below, we can see that prices topped out back in January and declined to a low in the latter part of March. While the decline was longer than many stocks, the depth of the selloff was not too bad in comparison. The trading volume became very heavy in March and suggests we saw a capitulation low of sorts.

The daily On-Balance-Volume (OBV) line declined from January to March and tells us that sellers of GSK were more aggressive. The OBV line has improved from its March low but it has a long way to go before reaching its previous zenith. The Moving Average Convergence Divergence (MACD) oscillator crossed to the upside in late March for a cover shorts buy signal and is now poised to cross the zero line for an outright buy signal.

In this weekly bar chart of GSK, below, we can see how prices broke the lows of 2018 and even late 2017, but quickly rebounded. Prices are still below the declining 40-week moving average line but they have recovered nicely in a short period of time. The decline in the weekly OBV line was not as sharp as the price decline and the OBV line has turned up with the price action. The MACD oscillator is narrowing toward a potential cover shorts buy signal on this longer time frame.

In this daily Point and Figure chart of GSK, below, we used a traditional even dollar increment to arrange the data. The chart shows a potential longer-term price target of $56. 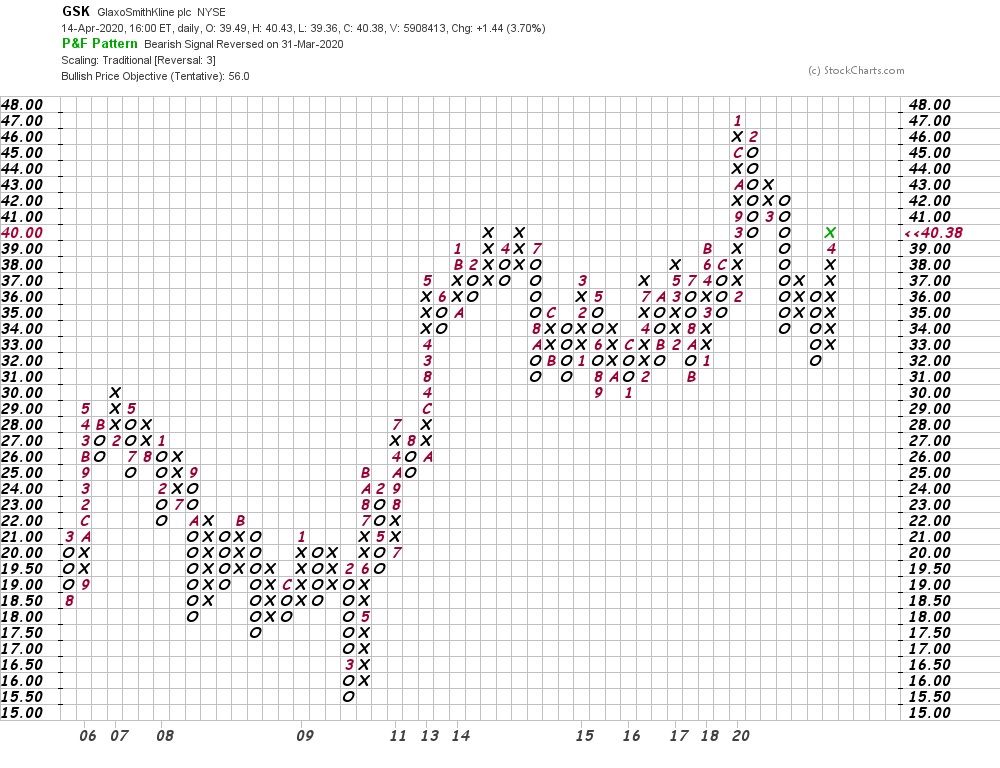 Bottom line strategy: The race for a vaccine is definitely on and maybe GSK will be the first to market. The charts and indicators of GSK are positive at this juncture so aggressive traders could go long here and on any minor dip, risking a close below $35 for now. The $55-$60 area is our longer-term price objective.

Get an email alert each time I write an article for Real Money. Click the "+Follow" next to my byline to this article.
TAGS: Investing | Stocks | Technical Analysis | Biotechnology | Healthcare | Life Sciences | Pharmaceuticals | Mad Money | Executive Interview | Real Money | Coronavirus

The charts are still pointed up - for now.