GFL was founded in 2007 and currently serves four million households in 27 states and most of Canada. Dovigi said GFL has grown into a big player as smaller operators opt to sell.

When asked about GFL's lucrative recycling business, Dovigi said recycling has been evolving since China closed the door to many recycled materials. He said new streams have been created for many of the products we use every day.

Let's check out the charts and indicators of GFL.

In this daily bar chart of GFL, below, we can see that prices have rallied for much of the past 12 months. GFL shows a peak in early April and the underlying indicators have been weakening. Prices are now trading below the declining 50-day moving average line. The 200-day line has a positive slope but not much history. The line intersects down around $27. The On-Balance-Volume (OBV) line was steady from December to the middle of April when it began a decline. A declining OBV line tells us that sellers are now more aggressive. The Moving Average Convergence Divergence (MACD) oscillator is below the zero line in sell territory but it has recently narrowed toward a possible cover shorts buy signal.

In this weekly Japanese candlestick chart of GFL, below, we see a mixed picture. Prices are in an uptrend above the rising 40-week moving average line but a bearish engulfing pattern is visible at the beginning of April. More recently in May we see a large lower shadow the other week, telling us that traders rejected the lows. The OBV line has been stalled since March and the MACD oscillator crossed to the downside last month for a take profits sell signal.

In this daily Point and Figure chart of GFL, below, we can see a potential downside price target in the $29 area. 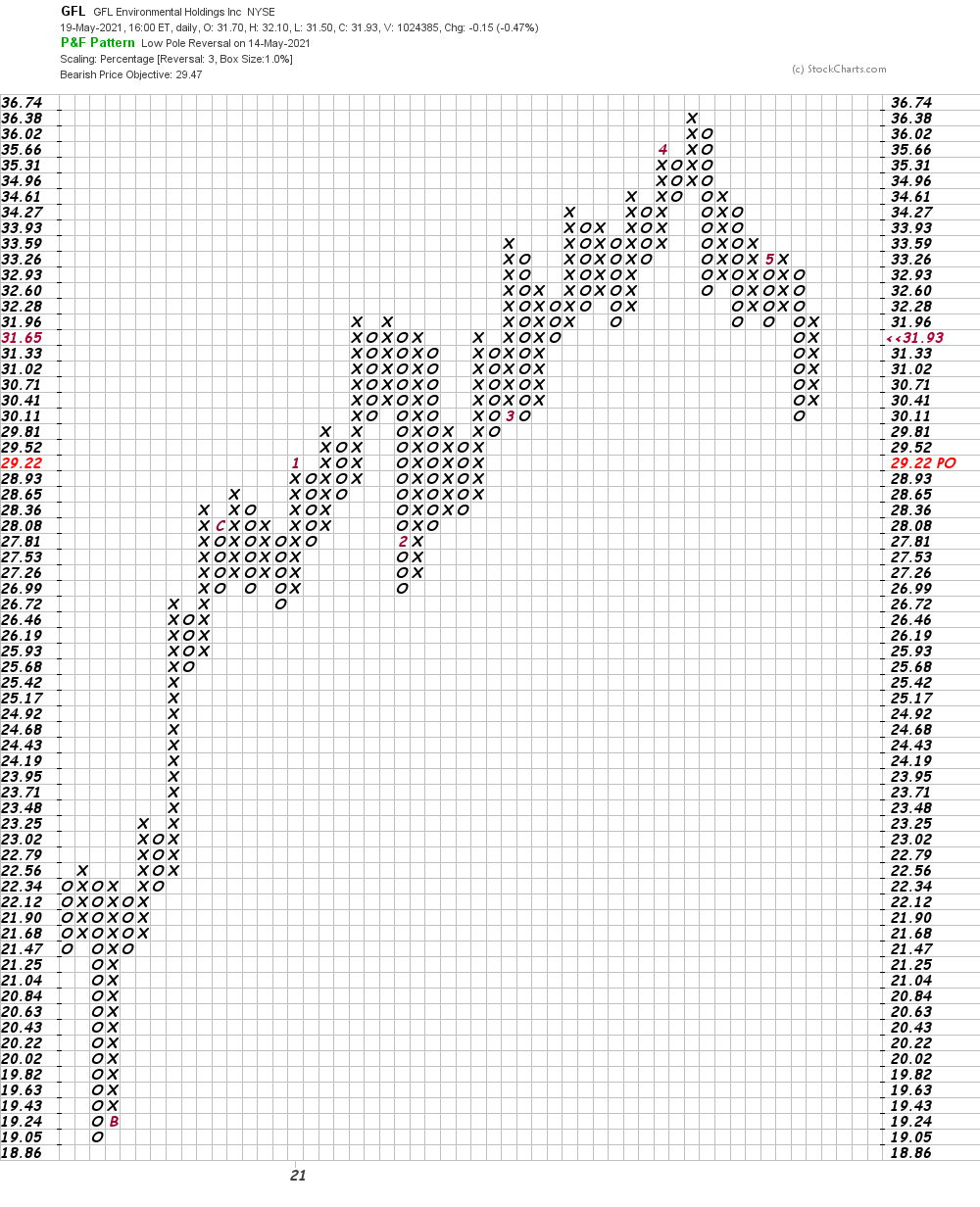 Bottom line strategy: GFL has made a good rally since going public but now the charts and indicators suggest we are going to see a period of sideways to maybe lower price action. Let's stand aside and see how this develops before looking to commit capital.

Get an email alert each time I write an article for Real Money. Click the "+Follow" next to my byline to this article.
TAGS: Investing | Stocks | Technical Analysis | Waste Management | Mad Money | Executive Interview | Real Money