It was another day when the S&P 500 was flat. That makes it three in a row. I think that's the short-term overbought reading hard at work.

In fact, I have another chart to show that tells us the market is short-term overbought. It's the 10-day moving average of the TRIN (Trading Index). Typically I discuss this indicator when the market is tanking. A high TRIN, such as a reading over 2.0, is a sign there has been too much selling, and thus we tend to look for a bounce after a high reading. When the 10-day moving average gets high -- I tend to use readings over 1.20 -- I consider the market oversold.

It got to 1.55 in mid-August, indicating an oversold condition. For those who ask me how we can be 2% or 5% from the highs and folks are so bearish, I would ask you to look at this chart. The 10-day moving average of TRIN doesn't get that high if there is no selling, so what you see is that August, despite that the S&P wasn't down much, had a boatload of selling.

Now, let's look at the plunge. And there is no other word for it. It's hard to find another time we went from a huge high to an almost one-year low. I don't know what that means, but I can tell you the bears will note the September 2018 reading that was not much lower than this and scream, "sell," and the bulls will focus on the November 2016 low, also in this area, and say, "buy."

I say it tells us we've reached a short-term overbought reading.

Breadth continues to act well, which means the breadth indicators continue to rise. My main concern is that the number of stocks making new highs continues to contract from last Wednesday's reading.

But the intermediate-term indicators are still not yet overbought, so I continue to think we are due a short-term pullback later this week or next week and that we should rally again after that. 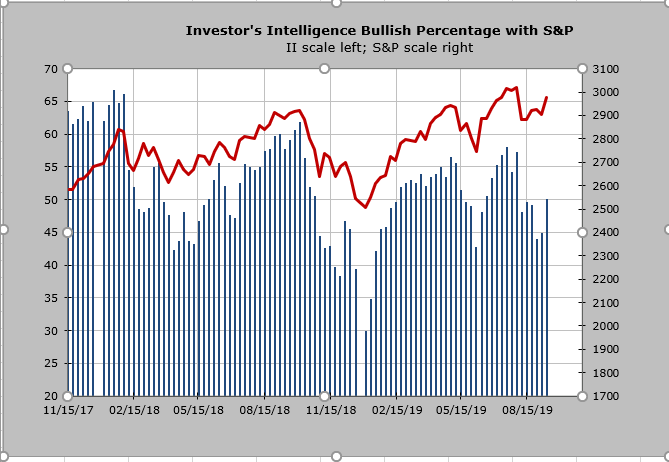 The banks have been on fire lately, so here's a chart of the Bank Index relative to the S&P, which has been in a solid downtrend since February 2018. It shocked me that this current rally hasn't even made it to the downtrend line yet. That's how weak they have been relative to the S&P. My guess is that line stops them in the near term (to go with the short-term overbought reading).

Finally, here's my views on where we're at and where we're headed as I discussed in a TD Ameritrade interview on Tuesday.