By TIMOTHY COLLINS Jan 05, 2021 | 03:07 PM EST
Stocks quotes in this article: CRLBF, CURLF, CGC, VFF, TLRY, APHA
There's a lot of focus on the outcome of the Georgia run-off elections -- and the result could mean we turn over a new leaf in more ways than one.
If the Democrats are able to pick up both seats, which seemed questionable in November, but now seems possible, it could benefit cannabis. The irony here is we often look to the Canadian companies and talk little about the multi-state operators here. The challenge is that many of those stocks trade over-the-counter (OTC) rather than on a big board.
One of my favorite names is Cresco Labs ( CRLBF) , but the stock won't be talked about in many places because of where it trades. Curaleaf Holdings ( CURLF) is another over-the-counter name and chart I like. Shares are breaking out strongly, but we won't hear much on them as they languish in the OTC market. They make for some nice little gems in a somewhat crowded field of little choices.
That said, we're seeing strong setups on the often most discussed names on the Canadian side. Canopy Growth ( CGC) , Village Farms ( VFF) , and Tilray ( TLRY)  have different price patterns, but similar conclusions. 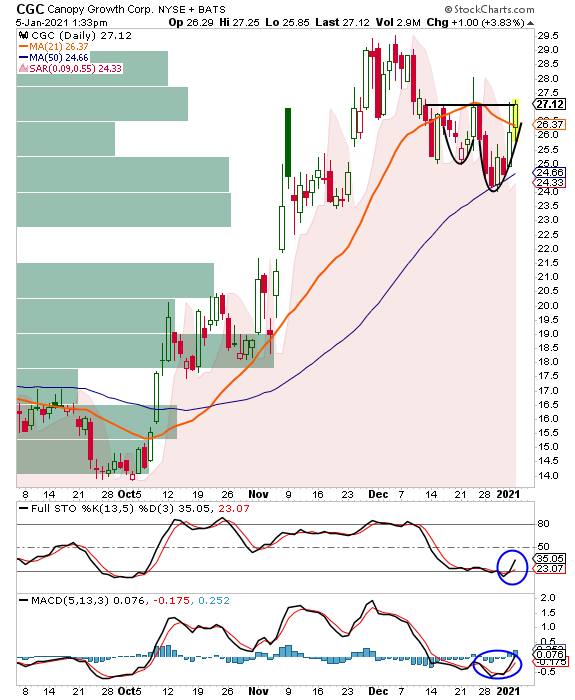 CGC possesses the secondary triggers I like to see in terms of the Full Stochastics, moving average convergence divergence, and parabolic stop-and-reverse (PSAR) Tuesday. Price is testing recent resistance here based on a "W" pattern. The negative of the pattern is the right side of the double is lower than the left; however, it shows a strong bounce from the 50-day simple moving average (SMA). There's a lot of positive. Good cannabis news from Georgia should send this to $29.50 fairly quickly. Downside is probably around two bucks. 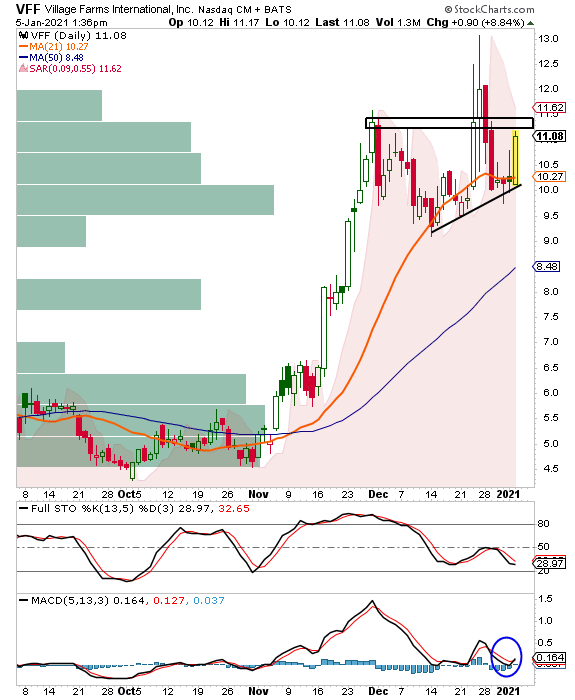 VFF, still my favorite of the three, is finally seeing a rally here after the late December fade. Support has been found a bit below the 21-day SMA but is clear. The secondary indicators here aren't as strong today. The Full Stochastics and PSAR are both lagging while the MACD turns here. We have a resistance area around $11.25 that needs work to retest the $12 or more area. While I like this one long-term, it may be a slight short-term laggard compared to a few peers. 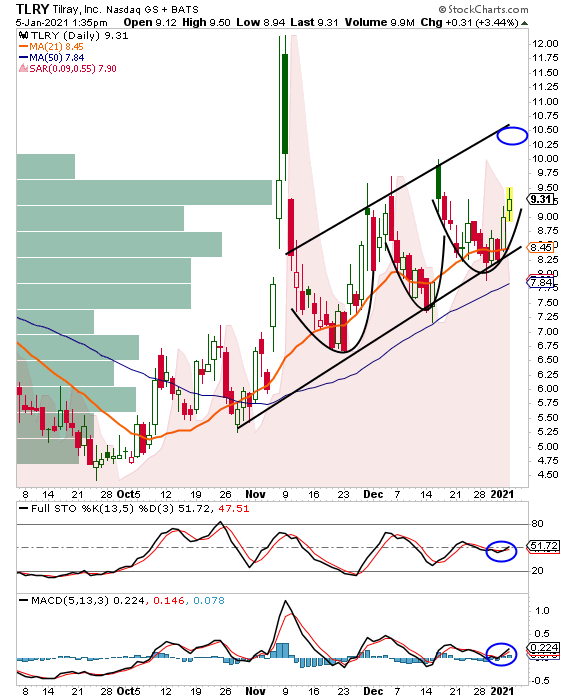 TLRY may have the most interesting setup. Yes, there's a merger coming here, so one could play Aphria ( APHA) , as well. They have similar setups as one might expect. We have a repeating "U" pattern, climbing within a bullish channel. It's a bit easier to see with the higher lows and crossovers in the Full Stochastics indicator. Again, we have the crossovers I like to see along with a breakout in price. This one looks like it has upside potential of $1.20 compared to a stop level about $0.85 lower, so the risk-reward may be best in this name.
Overall, I still prefer names in this space for the longer-term, but if you're looking to play into Georgia, I would lean CGC or TLRY, while I prefer VFF the most longer term.
Get an email alert each time I write an article for Real Money. Click the "+Follow" next to my byline to this article.
TAGS: Investing | Politics | Stocks | Canada | Cannabis