Since we were children, we have been told "not to judge a book by its cover." How about judging the stock market by its coverage?

The selloff appeared to be almost as broad-based as a selloff could be. Ten of the S&P 500's 11 sectors closed lower for the day, eight of them by nearly a percentage point or more. The financial media for the most part cast blame for this pressure on a number of reasons, mostly concerning the spread of Covid-19, its mutations, and its impact on both U.S. and global economies. The new variant was found in New York (You don't say... just look at our recent numbers. It has been here for a while). The U.K. went into total lockdown.

You already know by now that I have my doubts about this as a catalyst -- at least for what happened on Monday. Most of what you read about our markets last night, after centering the coronavirus as the cause for this weakness, then went on to acknowledge the political circus, both in the state of Georgia and in D.C., as secondary reasons for the volatility. I do believe the fact that some of the betting houses that had been showing the two Republican candidates for the U.S. Senate as the favorites flipping to show the two Democrats out in front was possibly a factor. Markets had long been set up for, and had priced in a blue executive, and a purple legislature. Markets are happy with that outcome.

Still, there is more.

Investors must understand that markets were not nearly as weak as had been portrayed on Monday. Sure, shares of technology stocks traded off, led lower by both software and hardware (and that does hurt most of us), but the two weakest sectors (using Select Sector SPDR ETFs as proxies) were the REITs (XLRE) at -3.23% and the Utilities (XLU) at -2.52%, both seen as defensive areas of investment, even potential safe havens. Not on Monday, they weren't. In fact, the one group that did show gains for the day was Energy (XLE) , a very economic growth-centric sector, as OPEC met and for now at least rejected Russia's plan to boost the supply side of crude markets.

So, what gives? Here's where you have to pay attention.

The spread of the virus has been with us. A post-holiday surge surprises no one. The polls in Georgia may have turned blue in response to these tapes that have surfaced. Today is election day in Georgia, so at least there should (we hope) be some certainty there within 24 to 48 hours (please). I see cause for volatility in the fact that at least 13 Republican U.S. senators and 140 Republican representatives have stated their intention to formally contest the results of the Electoral College on Wednesday. President Trump even vowed to "fight like hell" to keep the White House on Monday night. That would have exacerbated market weakness if it were indeed seen as potentially successful.

Remember, objections to election results by the losing side are quite routine. Democratic party leadership has pulled the same stunt (objecting to the Electoral College results) in each of the last three presidential elections won by Republicans (2000, 2004, and 2016), and nothing ever came of it. Then again, that was without a lightning rod of a candidate able to inspire both intense loyalty and incredible hatred in folks who fall closer to either the extreme left or right. However, I see something else, not well covered by the media on Monday.

Note this. The U.S. dollar gained strength throughout the day, forcing commodity prices, including crude. off of peak pricing. The momentum really picked up after 10 a.m. ET. How about stocks? 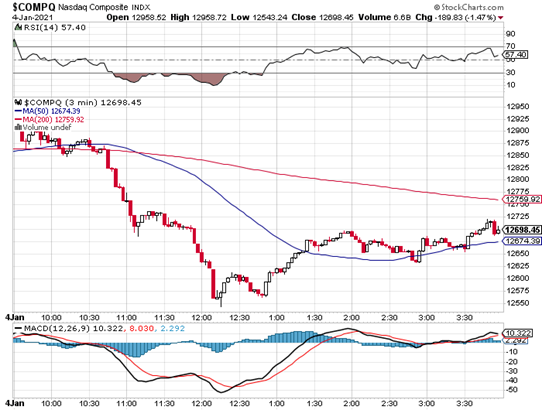 Well look at that. The Nasdaq Composite not only fell off of a cliff shortly after 10 a.m., so did intraday Relative Strength all as an attempt by the intraday Moving Average Convergence Divergence (MACD) to complete a bullish crossover failed by 10:30 ET.

What could have possibly happened around 10 a.m. that got worse by 10:30? Anyone? You, in the back... you look halfway sharp. What happened? You've got it. Excellent. Atlanta Fed President Raphael Bostic, a perceived dove, and new voting member of the FOMC in 2021, spoke publicly. So did Chicago Fed President Charles Evans, also a voting member this year and perceived as a long-time confirmed perma-dove by the economic community.

Now, Evans seemed rather dovish, spoke of monetary policy as being "well-positioned," but also spoke of tweaking the duration of the Fed's asset purchase program ($120 billion per month, $80 billion in UST, $40 billion in MBS) by this spring should conditions either improve or worsen. He was non-committal, but appeared open to tapering the current pace of quantitative easing if the economy should improve.

Bostic was, in my opinion, trying to speak the same language, but at least in the way I perceived it, came off somewhat less accommodative in his presentation than I had expected. Bostic said (to Reuters), "I am hopeful that in fairly short order we can start to recalibrate" in reference to the current expansion of the Fed's balance sheet/U.S. monetary base. Bostic spoke of bringing the Fed's holdings back toward a level "more in line" with where it was prior to the pandemic. Also from Reuters, Bostic is quoted as saying, "I am hopeful that moving on into this year that signals for weakness start to dissipate and the conversation turns consistently and robustly to sort of steady and broad-based growth."

Now I want you to remember what I wrote to you just yesterday. Just 24 hours ago, in Market Recon, I wrote, The FOMC "promises" to keep short-term rates close to zero. Baloney. They will react to a changed environment in something slower than real time as conditions change. Count on that."

I am no seer. I am no prophet. I am, however, an economics guy who studies policy and its impact upon human response. Of course the FOMC cannot tell you what interest rates will be, long-term rates in particular, in a year, or three. The very thought is absurd. Does the Fed have your back? The real answer is when your interests align with theirs. "They" are interested in provoking both economic growth and increased consumer level inflation. These goals require a steeper yield curve. You catching on now?

The entire financial media may have swung and missed on Monday, but our old nemesis, those keyword reading algorithms that determine price? They spun the marketplace like a top on Monday.

Readers need to understand a couple of things. One, equities rallied hard on Monday afternoon. Trading volume for the day was indeed elevated. Declining volume beat advancing volume by nearly two to one at the New York Stock Exchange. However, the tables were turned at the Nasdaq Market Site. Uptown, while losers beat winners by less than three to two, advancing volume clobbered declining volume by almost two to one. There are those less willing to play inside baseball that will point to Monday as a day professional distribution. Not so, says I.

Heck, I don't know what the state of Georgia, the official counting of electoral votes and December "Jobs Day" will do to the markets this week, but I am telling you that at least on Monday, enough pros bought the dip to offset the algorithmic selling that took place in the morning. Be cognizant of the fact, that while the CBOE Options Total Put/Call Ratio did hold on Monday above the 200-day simple moving average...

... once indices are omitted, the CBOE Options Equity (only) Put/Call Ratio crashed through the 200-day line to nearly threaten the 50-day SMA.

Bear in mind, though, that this ratio has been trending higher since hitting bottom in early December, which fits our thinking like a glove. You all know that I still think that markets will suffer some kind of corrective action in January, so let's not get nuts just yet. We identify. We adapt. We overcome. It's who we are. It's how we're built.

1) I was indeed surprised to see that JPMorgan Chase (JPM) , Amazon (AMZN) , and Berkshire Hathaway (BRK.A)   (BRK.B) had decided to fold Haven Health, after launching in 2018 to great fanfare. I must add that as someone who has long pounded the table for CVS Health (CVS) , I did not mind one bit. This just made the Aetna side of that company a more valuable component. Just an FYI, this has nothing to do with the online pharmacy just launched by Amazon this past November. That business, built upon the PillPack purchase two years ago, will proceed.

2) I did get short a few shares of Tesla (TSLA) on Monday (just below $740), only as a short-term trade, and much to my son's chagrin. I did come close to covering at $722 when the intraday MACD flipped, but took a pass. I am willing to risk losing small on this one in order to win big. This is not a position that I would add to on strength. Far too dangerous.

3) I did add to AT&T (T) on Monday. Now, be careful here. Both AT&T and Verizon (VZ) are on my dividend book, and they both pay handsomely in that regard even if the stocks just sit there. What investors need to be alert to are that the expected costs of building out the 5G network are growing rapidly. Both firms are building out mobile 5G wireless networks using low-band airwaves. The low-band stuff is not "the goods,'' and would be only moderately faster than 4G technology. What these firms need to buy more of is mid-band "C-band" airwaves. These are up for auction by the FCC with a winner to be announced in February. Word is that the bidding has already surpassed $75 billion. Those winning at auction will also have to spend an approximate $13 billion-plus on relocation costs and in payments to satellite operators. 5G technology is turning out to possibly be more trouble than it's worth for traditional telecom. Just keep those dividend checks rolling. That's why you're here, guys.

(Amazon, CVS and JPMorgan Chase are holdings in Jim Cramer's Action Alerts PLUS member club. Want to be alerted before Jim Cramer buys or sells these stocks? Learn more now.)

Get an email alert each time I write an article for Real Money. Click the "+Follow" next to my byline to this article.
TAGS: Federal Reserve | Futures | Investing | Markets | Politics | Put Call | Stocks | Trading | U.S. Equity