"Ruby Tuesday" just didn't sound right. The truth is that I do enjoy a risk-on rally just as much as anyone else. Really. I enjoy seeing account balances rise, particularly for the accounts that I do not manage myself (for a change). But I honestly would have rather seen equity markets trade sideways on Tuesday after Monday's rally, or even retrace a portion of Monday's gains. Instead, the Tuesday rally was even more impressive than Monday's action. The Philadelphia Semiconductor Index absolutely soared, tacking 4.46% on to Monday's run of 3.76%. The Dow Transports were hot again, up another 3.64%, this time on airline strength after being led by maritime shippers and the rails on Monday. 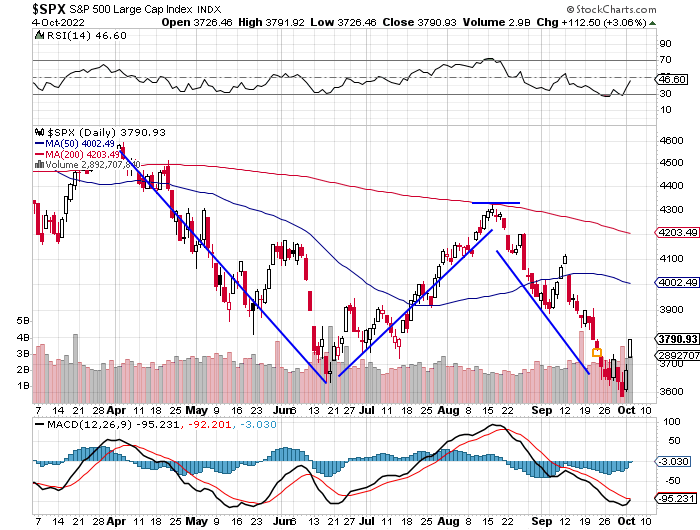 The S&P 500, as is the case for all five indexes mentioned above, appeared to stop short of testing its own 21-day exponential moving average (EMA) as daily moving average convergence divergences (MACDs) have only started to look a bit better. However, relative strength in two days' time has come way off of what were technically oversold levels, and while nowhere near being overbought now appear to be close to neutral. 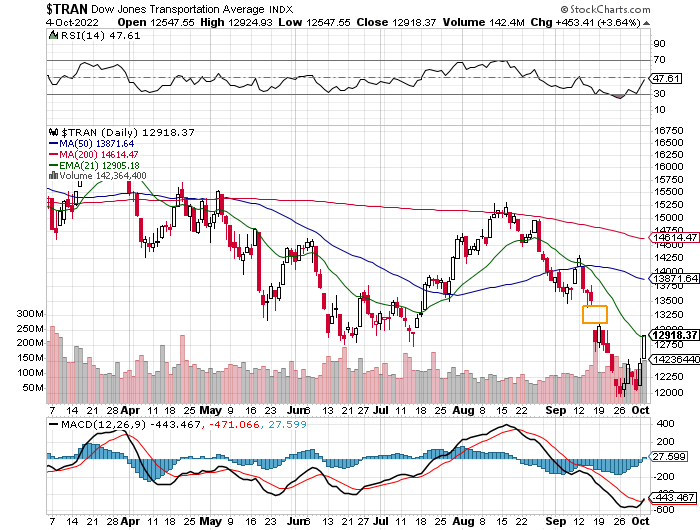 The Dow Transports appear to be just a little ahead of the rest of the pack. Readers will see that the Transports actually made contact with the 21-day line on Tuesday, potentially kicking up some resistance. Note that while the S&P 500 did fill the gap created in mid-September (that tiny orange rectangle), the Dow Transports have a much larger gap to fill and have not yet even begun that process.

For a second straight day, all 11 S&P sector select SPDR ETFs shaded green, with Energy (XLE) out in front. Interestingly, on Tuesday, all 11 of those sector-centric ETFs gained at least 1.52% for the session, with all five cyclical sectors taking places one through five and all four defensive sectors taking places eight through 11. (Talk about optimism -- wow!)

The catalysts for Tuesday's rally were different from Monday's. Tuesday's run was driven first by the Reserve Bank of Australia's 25-basis-point increase to its benchmark rate, where the world had expected 50 basis points. Could that signal a Federal Open Market Committee (FOMC) pivot, or at least a slowdown of its hostile behavior?

Second, the JOLTS (Job Openings and Labor Turnover Survey) number for job openings apparently plummeted in August from a rough 11.2 million positions in July to about 10.1 million. Yes, more than 10 million open positions would still be quite a lot. That said, the US economy has rarely seen open job postings decline by a rough 10% from one month to the next, and we have not yet seen September's data. Surely, this is a sign of tighter labor market conditions to come, no? We'll see.

So, why would I have rather have seen some sideways action or even a minority percentage retracement on Tuesday? Why can I not enjoy a two-day run that pushes the S&P 500 5.8% higher, even if my P/L might look nicer?

It's simple. In attempting to determine if there has been a change in trend, I need to see space between day one and a secondary attempt to push equity markets higher. This "space" allows for digestion. This also allows folks like us to determine where the short covering ends and actual portfolio accumulation begins. The two days together like this, at least in my opinion, now become one move, as if Monday and Tuesday were one long day. In this case, I do not believe that Tuesday confirms Monday, even with the beefy trading volume.

Sure, there may have been some accumulation on Tuesday. That's not our argument. In order to confirm, we need to see (sort of) portfolio managers come to a decision to put bloated cash levels to work, and we need to see contagion there. Fortunately for us, this is Jobs Week, so we should see some volatility over the next few days. In addition, September Consumer Price Index (CPI) is due next Wednesday. Markets will not march higher in lock-step through all of that. I promise.

Simply put, it's healthier even for the bulls if markets move sideways at this point, or even retrace a portion of the two-day move without giving it all back. Monday's lows are slightly higher than last Friday's lows. Bulls will need to see Monday's lows stand for the five-day week. Even testing those lows would be a bitter pill to swallow.

There are two potential downside forces in play for US equities on Wednesday. First up is the OPEC+ meeting in Vienna on Wednesday. Rumors of a crude oil production cut of 1 million barrels daily have pushed oil prices higher now for several days. Now, it appears that both Moscow and Riyadh are pushing for a cut across the cartel and its allies of as many as 2 million barrels per day.

Fact is that not all OPEC+ members are producing at quota and whatever the announced production cut will be, the actual physical reduction in output will be less. That said, professional estimates seem to be that an announced cut of 2 million barrel per day would still end up reducing physical output by as much as 1 million barrels per day. That's a lot. That's also inflationary for consumers, whether at the pump or heating their homes. That's not what the US wants.

That is, however, what Russia wants, as its aim appears to be to disrupt global energy markets as much as possible, and higher prices probably work in Riyadh's favor as well. Does the White House respond in such a way that restricts the export of US oil or US refined petroleum-based products? There will be a response, and then there is the supposedly soon to be an imposed cap on Russian oil prices. This all gets very messy, and all of it is inflationary, at the headline level and going into next month's midterm elections. Boring, this won't be.

The second potential downside force would be scuttlebutt in Washington that the US Commerce Department is preparing to announce restrictions ultimately barring US companies from selling cutting-edge technological products to Chinese entities that goes further and sweeps more broadly than the already announced restrictions that put the whammy on both Nvidia (NVDA) and Advanced Micro Devices (AMD) earlier this year.

Word is that two rules will be laid down, one meant to stop Chinese chip makers and technology firms from acquiring advanced US chips for supercomputers, artificial intelligence and/or military applications. It looks like a size threshold of 14 nanometers may be set for US export to China.

Second, the US may also implement a rule that places foreign nations on some kind of notice amounting to an export blacklist if they are not deemed to be cooperating with efforts meant to ensure that they are not in violation of any stated US export controls. These developments would obviously weigh upon both tech sector and semiconductor industry performance.

Micron Technology (MU) made news on Tuesday, announcing an agreement to invest as much as $100 billion over a number of years to build a chip manufacturing campus in Clay, New York, which is north of Syracuse. The plan calls for an original investment of about $20 billion by the end of the current decade, and builds out from there, so we are a long way from $100 billion. Heck, we're seven to eight years from $20 billion. Work on building the New York facility would start in 2024.

This news comes after Micron had already announced a $15 billion plan to build a new facility in Idaho as in the wake of the Chips and Science Act. Both Intel (INTC) and Texas Instruments (TXI) have recently announced US expansion plans. Once both the Idaho and New York plants are operational (so, not very soon), roughly 40% of Micron's chip production would be done within the US, up from 10% today.

Send in the Clown

You don't really want to read about Twitter (TWTR) here, do you? My expectation, and I am no legal expert -- just a guy with a knack for economics and financial markets -- is that the deal goes through at $54.20. There is no reason to buy TWTR close to that price and there is no reason to sell TWTR until one gets that price. Unless you need the money now.

Readers know that my energy longs are currently Chevron (CVX) and Occidental Petroleum (OXY) . I do expect energy markets and energy stocks to sell the news on Wednesday regardless of what the news contains as that sector has just been too hot this week. That said, I did notice two cup-and-handle patterns in the space that are very well-developed and still developing. Call it two to keep an eye on, not two to buy this morning. I am not long either of these names myself at this time. I have traded both in the past. 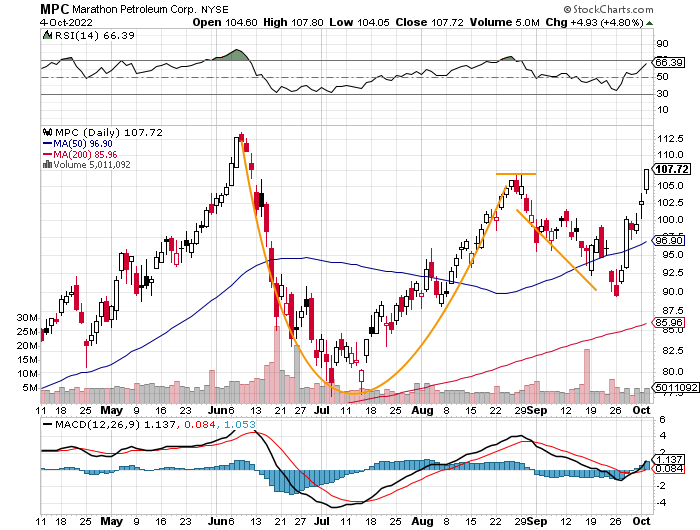 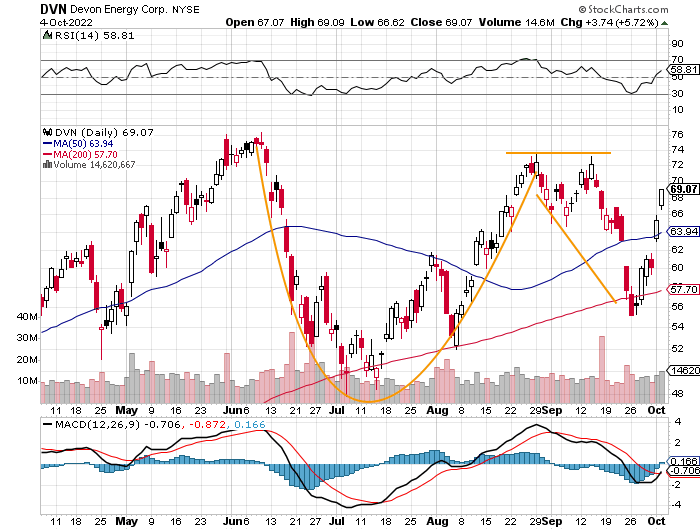