The death of a conglomerate. Don't worry. You still have Berkshire Hathaway (BRK.A) , (BRK.B) , but you won't have this conglomerate. General Electric (GE) , fresh off of a third quarter where the firm surprised to the upside for both profitability and industrial free cash flow, despite disappointing and declining year over year revenue generation.

I had for a long while stayed long GE shares when the shares were certainly not in style. I knew that current CEO Larry Culp was different. Different from John Flannery, who I think meant well, but was put in a tough spot. Oh, and quite different from Jeff Immelt, which means that he gave GE a fighting chance, which is putting it as politely as possible.

I sold my stake in General Electric ahead of the 1 for 8 reverse split early this past August, just in case the split went poorly. I probably should have trusted Culp more than that. The disclosure below will reveal that I have a long position in the name. What it doesn't reveal is that I only started to rebuild my GE long after those earnings were reported (Oct. 26th) and am only about 1/8 of the way back in. C'est la vie.

On Tuesday morning, General Electric announced that the firm, over time, would split into three separate, and independent publicly traded companies, all with defined, and non-competitive mission statements. This is that story.

Larry Culp took the reins at a bloated, broken firm three years ago. Under Culp's leadership, the firm sold off the locomotive business, home appliances business, jet leasing business, oil and gas operations, most of its financial services business (which has been the root of much of the firm's problems) in order to stabilize existing businesses, pay down debt, and target industrial free cash flow. The plan has been nothing if not aggressive.

Early this morning, the firm announced that GE Healthcare would be spun off in early 2023, with GE retaining a 19.9% stake. This has most recently been a $17B business in terms of revenue. The firm then plans to combine GE Power, GE Digital and GE Renewable Energy into one ball of wax, which according to the plan will be spun out in early 2024. These businesses combined to generate $33B for the most recently completed calendar year. Lastly, what is left, now known as GE Aviation... will retain the General Electric identity and will focus on making jet engines for aircraft manufacturers. This business has historically been a top supplier to Boeing (BA) during better times. Even with the pandemic and all of Boeing's non-pandemic problems, this was still a $22B business in 2020. All three firms will be considered to be "investment grade" once independent.

Current CEO Larry Culp is expected to serve as non-executive chair of GE Healthcare upon independence, and will remain both Chair and CEO of GE throughout, remaining with the aviation focused company once all is done.

On the matter, Culp said: "By creating three industrial-leading, global public companies, each can benefit from greater focus, tailored capital allocation, and strategic flexibility to drive long-term growth and value for customers, investors, and employees. Today is a defining moment for GE, and we are ready... and we're not finished. We remain focused on continuing to reduce debt, improve our operational performance, and strategically deploy capital to drive sustainable, profitable growth." 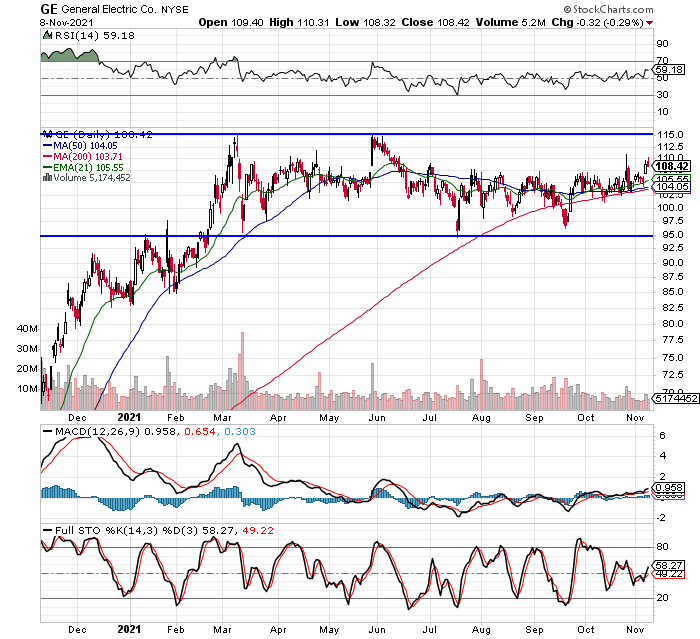 The shares ran as high as $126 and change early this morning, which was just after the announcement. As we approached the opening bell, GE was trading with a $112 handle. That's still a 4% pop, but even if that's where the shares trade today, that does not change anything technically.

The twice tested top of the basing pattern (fancy talk for "range") remains $115. The bottom of the base shows up at $95. That said, the three moving averages that I tend to focus on, are formed up into a traffic jam. The 21 day EMA, 50 day SMA, and 200 day SMA show up at $105.55, $104.05, and $103.71, respectively. That's all support, and it would take a sledgehammer and some bad news (which this is not) to get through that. That's the risk. My target price after the announcement will be $138, which might be a Wall Street high. I know Andrew Kaplowitz of Citigroup and Joe Ritchie at Goldman Sachs (five stars and four stars respectively at TipRanks) are at $136, so they're in the ballpark.

(Boeing is a holding in the Action Alerts PLUS member club. Want to be alerted before AAP buys or sells BA? Learn more now.)

Get an email alert each time I write an article for Real Money. Click the "+Follow" next to my byline to this article.
TAGS: Investing | Markets | Stocks | Technical Analysis | Trading | Aerospace | Energy | Healthcare