I swear the General Electric (GE) "upgrade" has traders and investors throwing logic out the window Thursday morning.

First off, I put upgrade in quotes because the analyst changed his rating to neutral from underweight. While that is an improvement for the stock is a neutral performing stock really a buying trigger? It might signal the worst-is-over thesis, but that doesn't equate to good things are coming.

Second, the analyst maintains a price target of $6 with a range of $5 - $8. If the shares are trading around $6.50, then risk, at least in nominal terms, is balanced. Investors have $1.50 upside potential versus a $1.50 downside; however, with the stock trading in the low $7s on Thursday spurred by this upgrade, risk now outweighs reward significantly.

This all isn't a knock on the analyst, but rather on the folks reacting to it. The analyst has been very accurate, so I question why folks are basically betting against him now.

If you're buying GE in the $7.30 range, then your risk is $1.30-$2.30 on the downside against a $0.70 upside based on the analyst's numbers. That's a 2-to-1 risk against your potential reward. Of course, upside reward is unlimited, so maybe that's a slightly conservative view, but again, I'm basing it on the accuracy of the analyst and the reliance on his upgrade.

Third, the analyst discussed the need for capital. I believe the term "material equity raise" was used. GE has been shedding assets like a malamute sheds fur in the summertime. They have raised a significant pool of cash, but would you rather trust the analyst that has been correct or the parade of management that has been wrong at GE?

Fourth, new management. Meet the new boss, same as the old boss? It seems every new leader at GE talks about how things will be different this time, a change is coming. And every story has ended the same. Perhaps GE should anoint the analyst from J.P. Morgan as their CEO.

I understand some of today is a mix of short covering and averaging down with a few traders thrown in, but I think you need to ask yourself if GE is a short-term swing trade for you or a long-term turnaround play. If it is the long-term, then I'd disregard the charts and simply examine the fundamental story. 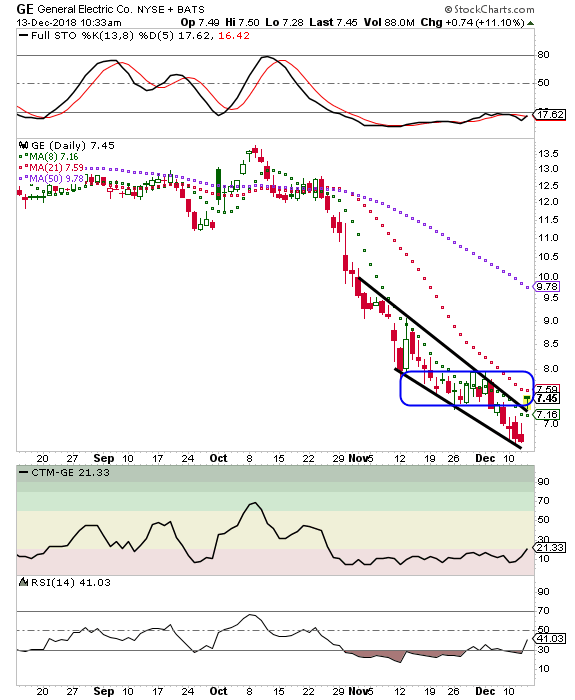 From the short-term side, I can see the $8 upside on the daily chart. GE bulls will have to churn through all the traders stuck in the stock for the last month who may be very happy to break even. After that, it is a small group stuck between $8-9. That's about the best-case scenario I can see on a big squeeze.

Clearly, the stock is oversold on any short-term metric I run. A push to $8 would erase the entire oversold thesis, and if it happens in the next few days, we could swing to overbought on a few metrics. I believe we're more likely to get trapped between the 8-day and 21-day simple moving averages for the next few weeks.

I see GE churning between $7.15 and $7.60. I would wait for one of those levels to break before making a trade. If I held, then I'd use $7.15 as a stop and look to sell some upside calls against the stock taking advantage of Thursday's over-optimism.

Overall, I don't see a compelling reason to chase GE Thursday. Heck, I wouldn't chase it Friday either.

If you snagged the $6.66 short-term bottom, then congrats, but for those willing to look at Thursday's "upgrade" through anything other than rose-colored glasses, you'll probably realize "the worst may be over" isn't a screaming buy endorsement.