By STEPHEN GUILFOYLE Dec 23, 2022 | 07:33 AM EST
Stocks quotes in this article: MU, XLV, XLY, XLK, LRCX, AMAT, NVDA, NOC, RTX, LMT, GOOGL
Twas the last day of trading before Christmas Eve
Not a trader was stirring. Perhaps a trick up their sleeve?
The hopes and dreams of managers dashed by a bear
They hoped that a "Santa Claus Rally" soon would be there.
To work they went on Friday needing not cars, but sleds
While visions of green shoot arrows danced in their heads.
Their friends and investors, regardless of market cap
Somehow all seemed caught in this huge value trap.
When out in my yard I heard a pitter-patter
I rushed up to see just what was the matter.
Up to my window I flew in a flash
Since 1987, I have feared another great crash
When what in my nervous search did appear?
But a realization that what matters most was already here.
With a renewed sense of faith I sat down to work
For sure, I have been foolish. Oh. What a jerk!
Those who matter most will sleep well tonight.
Their spouse, their parent or pal will fight for them, this fight.
-- Adapted and borrowed heavily from "A Visit from St. Nicholas" by Clement Clarke Moore

It's almost as if investors were teed up to sell on Thursday. Equities sold off sharply from the opening bell into mid-afternoon before finding some footing.

The market was already on edge after Micron (MU) had reported a tough quarter on Wednesday night alongside some tougher guidance. Then on Thursday morning, the Bureau of Economic Analysis released the third and final revision to its estimate for third-quarter GDP. That number moved up to 3.2% (quarter over quarter, seasonally adjusted annual rate) from 2.9%, a rather large upward move for a final revision. The quarterly GDP Price Index moved up as well, to 4.4% from 4.3%. That was more than enough for traders and algorithms alike.

The US economy was apparently, in aggregate, more robust for the three months that comprised the third quarter than anyone had anticipated. That, despite the aggressiveness of the Federal Reserve Bank on monetary policy.

Does this mean more aggression on the short end of the curve? Does this mean higher for longer on rates? This concept was cemented by and market sentiment sagged as influential investor David Tepper of Appaloosa Management appeared on CNBC ahead of the opening bell at 11 Wall Street. Tepper said he was "leaning short on the equity markets" while also saying "I'll be short bonds." Tepper added, "Sometimes they (the Fed) tell you what they are going to do, and you have to believe them."

Out came the stick, and it tried to hit the entire equity market. The intraday chart of the S&P 500 looks a lot like a one-day cup-and-handle pattern...

... that was 104 points off its Wednesday night close at its nadir. Then again, if one sees this one-minute chart as a cup with handle pattern, then one must acknowledge that this index closed at pivot. Personal Consumption Expenditures (PCE) inflation numbers cometh.

Every single US equity market index that I follow closed lower on Thursday. All 11 S&P sector-select ETFs closed lower as well, with all four defensive sectors taking places one through four on the daily performance tables. Health Care (XLV) was the top performer at -0.14%. Three sectors gave up more than 2% for the session, led lower by the Discretionaries (XLY) at -2.57%.

Technology (XLK) was second worst for the day at -2.52%. Sure, the Dow Jones US Software Index took a beating of 2.37%, which was more or less in line with the sector as a whole, but it was the 4.2% smackdown that investors handed the Philadelphia Semiconductor Index that made headlines. Large-cap losers within that group included Lam Research (LRCX) , Applied Materials (AMAT) and Nvidia (NVDA) . Those three were down 8.65%, 7.84% and 7.04% respectively. I did add to Nvidia close to the lows of the session.

It had appeared earlier this week that trading volume had started to ebb ahead of this weekend's holiday. Not so. Trading volume returned with a vengeance on Thursday, which could be a problem. Losers beat winners by a rough 4 to 1 at the New York Stock Exchange and by about 2 to 1 at the Nasdaq. Advancing volume took a 28.7% share of composite NYSE-listed trade and a 35.5% share of that same metric for Nasdaq listings. Aggregate trading volume increased 4.8% on a day-over-day basis for those NYSE-listed names and a whopping 16.5% for Nasdaq-listed names. Indeed, take a look at this: 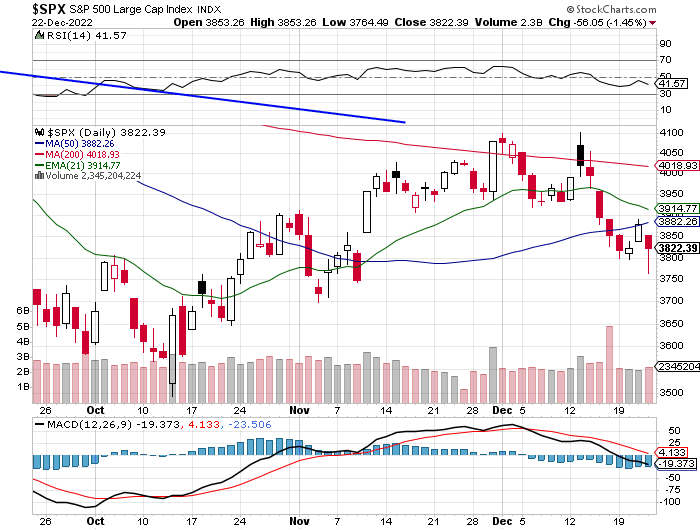 Readers may recall that I had wanted to brand Dec. 13 as a "tradeable top," but I was hesitant because, though the S&P 500 suffered a negative reversal that day, the index had still closed "up" for that particular session. Well, since then, we had huge trading volume on Friday, Dec. 16 (triple witch), which was a "down" day and if not huge, at least increased trading volume yesterday (a down day). This most recent down day came a day after the index had tried to take, but failed to hold, the 50-day simple moving average. Recall that 24 hours ago we discussed the importance of holding that line.

On Thursday, the US Senate passed the $1.65 trillion omnibus spending bill (by a tally of 68-29) that, if enacted into law, would keep the federal government running for the balance of fiscal 2023 (next Sept. 30). The bill includes $858 billion in defense spending, up 10% from last year, $45 billion in support for Ukraine, plus $772.5 billion for non-defense discretionary spending, which is up 6% from last year.

The military spending includes almost $140 billion for research and development. This is spending related to hypersonic weapons, gang, where we may have caught up to Russia but still trail China significantly. You may think it extravagant. I can't possibly explain how vital I think it is to lead in this category given that these weapons can be fitted with nuclear warheads and are indefensible. This research is led by Northrop Grumman (NOC) , Raytheon Technology (RTX) and Lockheed Martin (LMT) .

The bill also includes changes to the certification process for Electoral College results and legislation that extends Title 42 border restrictions until a different plan is in place. The omnibus bill now moves to the House, where a vote is expected on Friday.

On Thursday it was announced that Alphabet (GOOGL) had won the residential rights to broadcast the National Football League's "Sunday Ticket" games starting next season. The deal is valued at more than $2 billion per year for seven years. The games will be streamed on both YouTube TV and YouTube Premium. The fee schedule has not been released as of yet. Approximately 5 million subscribers currently pay $65 a month for YouTube TV, which is a cable TV alternative.

Can Alphabet make money on this deal? Or is this just some expensive way to drive subscription growth? The NFL has hung onto the commercial rights for the games shown at bars and restaurants and will sell those separately. DirecTV, the current Sunday Ticket provider, was paying $1.5 billion per year and struggled to make it profitable -- and this is prior to splitting the residential and commercial "tickets." We'll see...

I sincerely hope that you all have a very nice three-day weekend. I do mean that. May those of you observing any religious or cultural event this time of year find the love of family and friends that drives hope and sentiment for tomorrow.

To those who believe what I believe, Merry Christmas! I wish warm feelings for you and those you love and fond memories of those now gone. May you be overcome with the spirit of the season and take a renewed and optimistic outlook into year's end. May you and I both seek, find and kindle a better understanding for others, and perhaps find the patience to exchange ideas respectfully with those we may have already written off in frustration. That's up to all of us.

God bless you all.