Like most children of my era, I would rush home from school every day. There were blocks that undersized, skinny Irish kids wearing Catholic school uniforms had to avoid. Often, this required detours through backyards and alleys. Once home though, it was time for a quick change of clothes and out into the street to play whatever sport was in season.

We had painted a 101-yard football field on our avenue (we messed up), plus a pitching rubber and bases. Every kid in that street was conditioned. The first kid to notice an oncoming vehicle would yell "Car!" The game would stop as startled drivers would roll through as few as eight, or as many as twenty kids that just wanted to get back to playing ball.

Sometimes the unthinkable would happen -- several vehicles would roll through at a time, or worse... spaced just far enough apart to really interrupt the flow of the game. Every parent in the neighborhood had a distinct whistle, or signal that when heard would break the children of those families into a run. The game suddenly forgotten. This script played out a thousand times over, until it didn't.

Sometimes the marketplace doesn't play the role according to the script, either. I fully expected the Friday rally that picked up steam going into that close. I even thought that we might see some Monday morning spillover. Especially after the improved Chinese manufacturing data that, in all honesty, can be partially explained through seasonality.

Another all-day rally though? No, I had thought that the worm might turn before the closing bell peeled its last. I had warned that some of my models were showing much-higher equity prices in last week's television spots. While I will gladly benefit from what the markets give me, I actually meant that higher prices would result from an expansion in valuation metrics, and I meant for it to happen down the road a little.

What changed? The U.S. domestic economy is apparently having a much-better quarter than anyone had realized. Or at least, with a lot of data points to yet hit the tape, that's how the picture is taking shape. Early on Monday, while February Retail Sales may have contracted on a month-over-month basis, the upward revisions to January were significant enough to dress up the perception, if not the sentiment transmitted by that series of data points.

It gets better. The March ISM manufacturing survey printed above expectations, and what can I say about February Construction Spending that hit the tape at 1% m/m growth, on top of a January print that itself was revised from 1.3% m/m to 2.5%? All three of these items are constructive as far as quarterly GDP growth is concerned, and that was not missed by the Atlanta Fed.

Atlanta upped the first-quarter GDP snapshot, known as GDPNow, to 2.1%. All the way from 1.7%. Three weeks ago, this Q1 snapshot stood at 0.2%. All of the above, in one way or another, increase demand for either labor, skilled labor and/or inventory. See where I'm going with this? Expectations for growth have suddenly changed -- and with it, money flows moved out of Treasury markets ... right into the equity sweet spot. It was the worst day for the 10-year note in three months.

Futures markets in Chicago are not yet pricing in anything other than what they already were. There is still only a 37% probability, according to that market, that the Fed stands pat on short-term rates throughout 2019, and a 63% chance that they cut. That is how it should be for now, as forcing short-term rates higher four times in 2018 was quite simply a pace that the long end of the curve was unable to keep up with.

That contributed mightily to the wiggles and wobbles across the economy over several months. As I have said before, it would be better for the FOMC to slow the balance sheet management program down to a crawl as we all wait for traffic to pass than to grind the program to a complete halt. Once halted, you might never get a chance to kick the program back up to speed. I am all about leaving open possibilities. Better to leave that option open at a pace that minimally impacts general liquidity than to stand down definitively. That skinny kid in the Catholic school uniform still found his way home.

Does this change our story out beyond the horizon? That's a tougher game to predict. There will, however, be a game played out on the avenue, with real people... in the real economy. February Durable Goods Orders at 08:30 a.m. ET will matter.

Oil markets remain in focus, particularly now that we have a more optimistic view on U.S. domestic growth -- and perhaps even Chinese domestic growth. Five-month highs. WTI crude approached $62 per barrel in overnight markets as the big dog -- Brent crude -- works its way toward $70. That spot has been, in the opinion of many, what the Saudis have targeted, and is considered to be where the Saudis might cut the Russians a break on production. We have often talked of $62 as the gateway between this pricing level and the next. This impact may just come to fruition, and create a pivot. Stay keenly focused here.

It is a beast that dwarfs Apple (AAPL) , Royal Dutch Shell (RDS.A) and Exxon Mobil (XOM) . A great big profit machine. There may have been no agreement on how to value an initial public offering of equity to the public last year, but Saudi Aramco is coming to market, just not the way that investors had expected.

As the firm spends $69 billion for petrochemical producer Sabic, Aramco expects to borrow up to $10 billion from the public, just as the underlying commodity reaches medium-term highs. In preparation for this sale of perhaps up to 30-year paper, the firm has disclosed in prospectus form 2018 net income of $111.1 billion. Not only is this nearly double the less than $60 billion generated by Apple, the number is more than five times the $20 billion in net income that Exxon Mobil can boast. Yes, fossil fuels are done for. Safe to say... not so fast, my friend.

Ever met a person that invested in Amazon (AMZN) (not traded) and lost money? Tough trick. Had to have been accomplished through a sale made of necessity. Certainly not by an investor supported through the luxury of patience. Your author has been long Amazon for a good while. Not sure how long, without doing some work that I am not willing to do at zero dark-thirty as I write this morning note.

Just last week, I had noticed that my jeans had become too loose. Had to hitch them every few steps just to walk. Dropped in at Walmart (WMT) . I needed an uncommon size. No dice. Came home, hopped on Amazon's e-commerce website. Poof. I've got pants that fit the next day at a discounted price delivered for free. Beat that? Amazon can.

Now that the internet knows what pants I wear, I get ads for those trousers. The purveyors of this mens' wear will pay to target customers they know to be possibly amenable to paying currency for the product. Amazon's e-commerce business is thought to be mature. The advertising business not so much. That business is still growing, is a higher margin business -- and in turn, will, along with the Prime program, continue to drive e-commerce to the site. Then there's the beast of whom I speak. Amazon Web services (AWS). Bang.

Did you notice what Oppenheimer's Jason Helfstein had to say in his note on Monday as he raised his firm's price target for AMZN to $2,085 from $1,975? According to Helfstein, "Amazon is using AI in almost every part of its business and tends to disrupt almost every market it enters." AWS generated $26 billion in 2018. By 2022, Helfstein sees unit revenue that will increase to $75 billion. Mentioned are the bevy of start-up firms that prefer AWS as their business cloud platform. According to an article penned by Brian Deagon at Investors' Business Daily, Lyft (LYFT) recently signed a three-year deal worth $300 million, Pinterest is on board for $440 billion over four and a half years and Airbnb and Palantir are also on board. 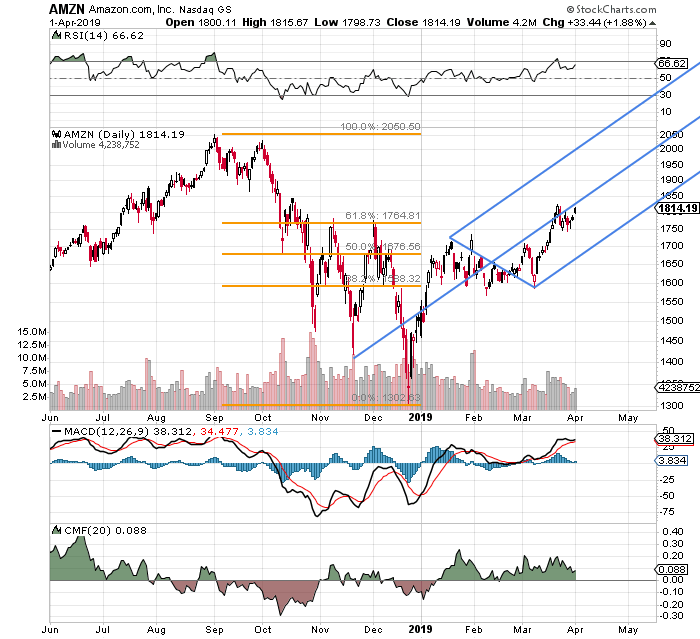 My target price for Amazon had already been $2,100 -- a level that I had reiterated for you back in a piece that I wrote in January. Well, I am re-reiterating that spot today.

One easily sees that Money Flow has been solid. Relative Strength has been strong, as this name has benefited from a terrific month of March. For the purposes of the Pitchfork, I took some liberty and omitted the deep selloff of late December from the model. I may do that with a number of charts for different names, as that spot on the charts may, as painful as it felt, be nothing more than statistical noise that if recognized, creates unsustainable trend lines across the entire equity space.

This model, the way that I have drawn it up, creates a visual path for Amazon to trade at, or near, my target price as early as June or July. If the December selloff is valued as equal to other lows on this chart, the timeline would be reduced to weeks, if even that. Oh, see the price cuts at Whole Foods? Disruptive.

Get an email alert each time I write an article for Real Money. Click the "+Follow" next to my byline to this article.
TAGS: Economic Data | Economy | Investing | Markets | Stocks | Trading | World | U.S. Equity