Down 13% on Wednesday... up a whole lot overnight Thursday into Friday morning. Late Thursday, the Wall Street Journal broke the news that (former) meme stock company GameStop (GME) plans to launch a division that will develop a marketplace for NFTs (non-fungible tokens) and establish cryptocurrency partnerships. This would be one giant step toward the evolution of a company that has struggled as physical video game sales have declined, into something else.

The report say that GameStop has hired more than 20 folks who will run this separate unit, and build an online hub for trading NFTs that have something to do with video game related or virtual goods. GameStop has supposedly asked some game developers to list NFTs on the firm's marketplace once it is operational.

In addition, the firm is close to signing partnerships with at least two crypto businesses to share and co-invest in the development of games that use blockchain and NFT technology, as well as related projects. GameStop could ultimately end up with similar agreements with a dozen or so crypto companies and co-invest in them as well.

We know that last year's turnaround had not bore fruit. Revenues were higher largely due increased sales of hardware. Software sales declined and losses widened. Moving the business in a new direction was a necessity. Having a hand in the crypto or NFT space seems like a no-brainer for a company whose customers largely already spend time in and money on virtual environments. Becoming a marketplace for such blockchain focused "goods" might be just what the doctor ordered for a firm like this.

The firm is expected to post a profit for their fiscal fourth quarter, but one that will be significantly reduced from the year ago comparison after three successive money losing quarters. Revenue is expected to run about 6% higher. Margins are still negative. Cash flows are negative. The balance sheet is much better than most people think. Current assets and Total assets are much larger than are current and total liabilities less equity. The current ratio stands just below "two" which means that GameStop will have no problem meeting short to medium-term obligations.

While the firm has done a great job of reducing debt and the cash balance is more than double the total debt-load, one problem could be that inventories comprise about 39% of total assets. While that could be a problem for any retailer, with one such as this, I would think that the value of outdated inventory might be very difficult to measure accurately. That said, GME's quick ratio still stands above the "one" level and that's important.

Oh, I almost forgot (not really)... as of mid-December, a rough 18.6% of the entire float was still held in short positions. That does put a bud under the shares, and could cause another mini-squeeze on a day such as this.

I don't scoff at NFTs. To the contrary, I am still trying to play some catch-up and learn more about them. I have no problem with GameStop's balance sheet whatsoever. Is the stock overvalued? Of course it is. You can't even place a forward looking P/E on these shares. That said, if they had a good idea (they might) and were able to pivot the business (again, they might), then they might just have a ballgame here.

In my opinion, GameStop had to do something, and this is what they can do that ties in their legacy with probably a significant number of loyal or past customers and work towards a growing model instead of one in decline. 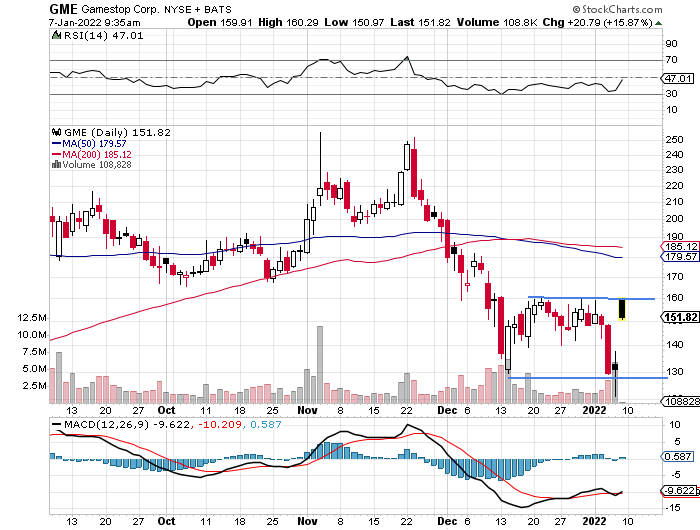 While I do not think that the shares are worth $150+ (or anything close to it), I do like that at least in the early going on Friday that resistance was hit at the same level that it was met for most of December. A basing period is exactly what the doctor ordered, at least technically for these shares.

A trader can still get paid a rough $12 for GME February $130 puts. Seems like maybe a decent idea. Even if the trader were to have the shares put to them in mid-February, the net basis would stand at $118. A risk averse trader in need of protection could purchase the $115 GME puts for about $7. The net credit of $5 only takes the net basis of the equity (if put to the trader) down to $125, but also protects the trader from catastrophic losses.

Get an email alert each time I write an article for Real Money. Click the "+Follow" next to my byline to this article.
TAGS: Investing | Stocks | Technical Analysis | Trading | Gaming | Cryptocurrency