The Piper Calls You

Have you already joined him? Heard that? The whispering wind. A need to stay the course. Is now the time to change the road you're on? U.S. equities showed strength late in the session (can't really say "day") on Wednesday. Record highs? Again. For the S&P 500, the 3,000 level beckons. While the fact that the U.S. and China seem to at least have moved toward reopening talks toward eventually ending the current trade war, and while OPEC and Russian-led non-OPEC oil producers overtly try to support crude prices, are both helpful events, the market driver has been the macro. Macro that has on the surface appeared somewhat weak of late. This has investors putting faith in the path that central bankers will likely now feel compelled to take.

Though the opportunity to turn a profit has been handed to us on a silver platter, is it easy money? Is it ever? Surely, it seems to take no time at all to turn the yellow banana brown. For the blueberries to grow fuzz. Risk is never easy, simply because it is just that -- risky. Today, we stand in anticipation of the pre-opening Bureau of Labor Statistics release of the June Employment Situation.

Just 11 days ago, the Atlanta Fed's GDPNow model for the second quarter was running well above expectations -- at 2.1% (q/q SAAR). Since then, the model has experienced more hits than Rod Carew. From May Durable Goods that missed badly -- both ex-defense and at the headline -- to May headline consumer level inflation (PCE) that softened from April, to May Construction Spending that printed in deep contraction, to a trade balance that saw imports grow faster than anticipated, each individual data-point has appeared to take a bite out of the Atlanta Fed's model.

With that model now showing Q2 growth at just 1.3%, expectations for a Fed Funds Rate reduction on July 31 have been reinforced, as has been the probability for secondary and tertiary cuts not too far down the road. Late on Thursday evening, the U.S. 10-year note yielded less than 1.95% for just a little while, while across the sea, German 10-year bunds grazed -0.4%, Even 10-year Italian paper, with all of that nation's fiscal issues, saw yields as low as 1.6%. It looks like that nation has avoided punitive action that could have been taken by the European Commission. There is belief across Europe that the ECB is already headed back toward super-accommodative policy -- and that this will not change with Mario Draghi set to pass the baton to Christine Lagarde.

Though the Atlanta Fed will not adjust their model in response to the jobs data on Friday morning, this data will certainly capture the focus of those who follow the Fed closely -- and thus will drive the market narrative on a day that will see limited participation due to the fact that it simply breaks up what would have otherwise been a long weekend. Those not driven by circumstance or necessity simply may not be at their desks on such a day. Even fewer will approach this day at the ready, having put in their usual preparation. Atlanta will not step back up to the plate until next Wednesday (May Wholesale Inventories).

What will give traders cause for early morning concern on Friday will be the numbers posted for job creation by the ADP Employment Report on Wednesday. That number missed by a considerable margin for the second month in a row. The two do not always move in correlation on shorter timelines (though they often do confirm one another over the long-term), but the BLS did move with the ADP for May. A repeat of such performance for June may just give traders a renewed belief in a more aggressive cut on July 31 that I think necessary.

I would be fine with the 25 basis-point cut at that meeting and a full stop put to the quantitative tightening program at that time. After all, if any step at all is taken toward reducing short-term rates and the balance sheet reduction program does continue to run through September as the current plan designates, that would in effect be easing and tightening policy simultaneously. Anyone else following here? I have not caught a whiff of this in the financial media.

That oddity aside, the net-long equity crowd will be put in the position of rooting against the U.S. economy for the short-term as far as the macro is concerned, but then pulling for corporate America to beat negative projections for earnings over the next two quarters.

As we move forward, we will continue to identify targets of opportunity and areas of weakness both created and presented by our individual ability, as well as the markets. We will adapt and we will overcome. That's what we do, but it makes me wonder about what it is we root for. Just who the heck are we? In the end, we'll know if we're evil or divine. What you heard? Just the forests echoing with laughter.

Update on the G-20 Trade

The G-20 trade that I gave you a week ago worked really well over the short term. Myself? I took off the Caterpillar (CAT) trade first thing Monday morning. That worked out well, as that stock has been down since.

As for Nvidia (NVDA) , I took off 40% that morning, and a smidge more as the shares sold off on Tuesday. I've decided to stick it out for a little while with a 50% stake of the original trade as I have been underexposed to the semiconductor space for a good while. For the sake of convenience this position became useful. I'll add it to my holdings in Advanced Micro Devices (AMD) , Intel (INTC) , and Seagate Technologies (STX)  -- the latter only there for the dividend.

The one part of the G-20 trade that I have not touched, has been the "short-term" trade in Apple (AAPL) . Of course, I reserve the right to change my mind, but I have for now added those shares to the core position, as the core had been under-strength since my panic-point-provoked sale at $180, anyway. Not that I like paying up for shares that I have sold lower, but to trade effectively, one must put ego aside. No pinch hitter has ever performed well in the clutch by over-focusing on that hitter's most recent strike out. Besides, respecting panic points prevent disasters, which is why I use them, even if on occasion, they can shave profit. No, the iCloud outage currently in the news is not part of my decision-making process for this name just yet.

It has become my belief that this name will continue to respond more so to China trade war news than will many other stocks, which is why I will continue to proceed with care. Understand, the firm's push toward services is a valuation-driven necessity, and that analyst community reliance upon hardware calculus will exacerbate the impact of China upon this stock when you, as an investor, may least welcome it.

My personal thought is that with smart phones and mobile devices representing a more mature market at this point, sales here are merely to maintain a playing field for the rest of the eco-system, and no longer the driver themselves. In fact, as far as hardware is concerned, I would at this point focus more on where the growth is likely, such as in wearables... Apple Watch and Airpods. Airpods will serve as a convenience that folks never knew they needed, while the watch will provide the health and wellness extension required for the drive toward a services-reliant model. 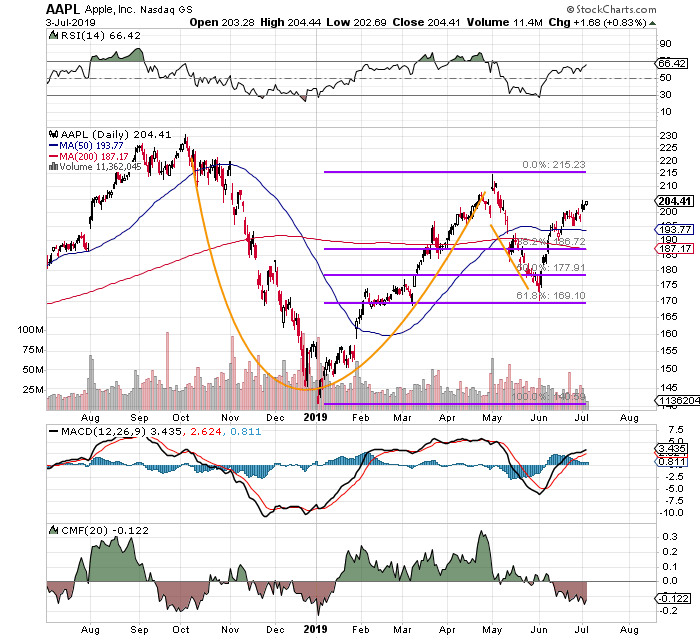 The updated version of the chart that I gave you a little more than three weeks ago is still good. The shares are trading roughly $5 higher, meaning that the rebound created by the cup with (giant) handle (21% depth) is still in force. The Fib levels have not changed.

Note: There are no significant quarterly earnings scheduled for release today.

Get an email alert each time I write an article for Real Money. Click the "+Follow" next to my byline to this article.
TAGS: Economic Data | Economy | Federal Reserve | Investing | Markets | Politics | Stocks | Technical Analysis