Since I was a boy, older, wiser folks have told me "Be careful what you wish for." I often heard those words when making brash, bold, or perhaps just under-developed proclamations as a youth on the way up. Oh, the hour is still early on Tuesday morning. Very early. There are those who would refer to what I see as early morning, as late at night. The point is neither here nor there. The point is that domestic equity index futures were trading below fair value when I got to my desk at 03:30 a.m. ET, and have dropped further since. Could it be?

The pressing thought in the back of my head is that the potential for positive returns from a risk/reward perspective must be diminished at this point. One might think. Still, I have now been writing about respecting both trend and price even as having to note a more cautious approach, U.S. equity markets have been on the receiving end of even more capital flows. And we know from studying trading volumes, which have been heavier of late, that the flows have been substantial -- and to a significant degree have not been pulled away from sectors that led during the public health crisis, but more from cash that was raised during that February / March meltdown.

One must remember this. We, who work the markets day in, and day out, see troughs and peaks as both danger and opportunity. Someone who invests, but does something else during their more productive hours completely different from what we do, hands their investable funds off to someone else. If that "advisor" got the investor into a cash preservation mode somewhat early as markets collapsed, and then back in, even a little late on the rebound, the investor will note that his or her money was well managed as the markets went through what they went through. This type of investor was relieved that monthly or quarterly balances had not been as awful as feared, and likely never will at this point, unless the markets remain as volatile as they have been since February (which cannot be completely discounted.).

So, it is so. As the zero dark hours pass and I run a number of net-long portfolios quite cautiously, I almost welcome the sight of S&P futures trading well below fair value. It becomes very difficult to add to favored positions when they appear to never come in. I have longed for markets to move sideways to lower, or just to normalize, as Q2 earnings, expected to be just terrible, still loom more than a month away. Be careful what you wish for.

Up for the year. That's what I think I heard them say. Them? Who's them? The financial media. Can we go back? Back before the pandemic. Before quarantine? Before they cancelled baseball. Oh, the innocence. If only we knew then that we were just children, we would have cherished the experience more. You know what Jim Cramer says... "No woulda, coulda, shoulda's."

We cannot go back in time, but our equity markets have. On Monday, the small-cap indices such as the Russell 2000 and the S&P 600 chalked up solid 2% gains. Nearly every other major equity index scored, with the exception of the Nasdaq 100, which scored gains of more than 1%. The Nasdaq 100, for the new kids, is comprised of the largest 100 companies listed at the Nasdaq, excluding the financial sector. This leaves an index of large-caps that reflects a very tech heavy, biotech heavy exposure. Hence, the 2020 leadership, and the very recent lack thereof.

Monday trading volumes, as equity markets extended what were "gap up" increases on Friday, were down from Friday, but still elevated. Trading was hotter on both Friday and Monday, which were both big "up days", than was trading volume last Thursday, a down day that was seen as active at the time. Market breadth remained wildly positive on Monday. Winners beat losers at the NYSE by almost 5 to 1, and at the Nasdaq by a rough 3 to 1. Advancing volume simply crushed declining volume by more than 13 to 1 downtown, and by about 2.5 to 1 up in midtown.

Because I like to talk about the CBOE Options Total Put/Call Ratio, that ratio printed deep in the hole on Monday. Check this out.

That's not all. Let's remove index options from the total. Going with just options directly related to underlying equities, the ratio leaves the realm of the amazing, and enters the realm of the unbelievable. The CBOE Options Equity Put/Call Ratio hit 37 on Monday.

Zoom out for an overview? Okay...

The fact is that investors have not been this light in the purchase of downside protection for single stocks through the use of related options since early 2011. Stunner.

On Monday, the National Bureau of Economic Research made the call official. The U.S. economy had peaked in February. The economy then contracted, and the longest period of economic expansion in U.S. history dating back to June 2009 was put to bed. Thank you Captain Obvious. Some in the media "oohed and ahhed" over how quickly the call had been made, as in the past it has often taken almost a year to precisely date the start of a recessionary period.

What gave it away? Was it the government-mandated shutdowns implemented not just across the country, but across much of the planet as well? Maybe it was the tens of millions that queued up electronically trying to enroll for jobless benefits. Maybe it was the obvious negative reaction witnessed across financial markets that then forced an overwhelming reaction by policy makers. Okay, it's their job, we'll cut them a break. The NBER has to chronicle these events, and the media has to make it out to be news.

Related news, in a way, also hit the tape on Monday: The World Health Organization, made an odd looking statement. "From the data we have, it still seems to be rare that an asymptomatic person actually transmits onward to a secondary individual. It's very rare." Apparently, the WHO, if this can be believed, now feels that asymptomatic spread of Covid-19 is not the driver of infection it was once thought to be. I think. Of course there was no release of supporting data to help lay folk understand.

If true, and we need U.S. agencies to pipe in here, then the economy could in theory, reopen much more rapidly than previously thought. Could it possibly be as easy as isolating the symptomatic? I have my doubts. That said, with the broad social unrest that this nation has witnessed just about everywhere over the past two weeks, it may be safe to say that we may have our own data on the validity of this concept within a short period of time.

More Help on the Way

The Federal Reserve bank was busy on Monday, one day ahead of going into a two-day policy meeting. On Monday, the Fed eased the rules around the still to be launched "Main Street Lending Program", not to be confused with the "Paycheck Protection Program" which was aimed at supporting small business employment. As this $500B program nears its official start, the central bank has extended the intended term from four years to five, has reduced the minimum loan from $500K to $250K, and will allow participating businesses to defer both principal and interest payments for two years, which is up from the previously announced one year. These loans still cannot be forgiven. The program will be open to businesses with up to 15K employees, or less than $5B in revenue last year.

Keep in mind that the Fed has not yet launched its program that will purchase corporate debt just yet either. The plan had been announced back in mid-March and had been expected to launch by early June, at the latest. To this point, these purchases have not moved beyond the ETF phase. Once launched, one would expect the support to become visible in these markets. One would expect this to potentially impact large-cap equities. In a positive way. When launched. Already priced in? To some degree.

Most readers likely noticed what extremely highly rated RBC Capital Markets analyst Mark Mahaney had to say about Amazon (AMZN) on Monday. Mahaney reitered his "outperform" rating on the name, while increasing his target price from $2,700 to $3,300. Mahaney cited Amazon's dominant position in the realm of e-commerce based on the structure of the Amazon Prime program.

He also mentioned Walmart (WMT) in a positive light, given that firm's incremental improvement in this burgeoning slice of the retail industry. Mahaney's firm, RBC, surveyed 2,800 consumers during the public health crisis, asking which internet retail sites they most often use. Amazon placed comfortably in first place at 91%, while Walmart finished a distant second at 43%. No other site was named on more than 30% of the responses, and that by the way, was Target (TGT) . 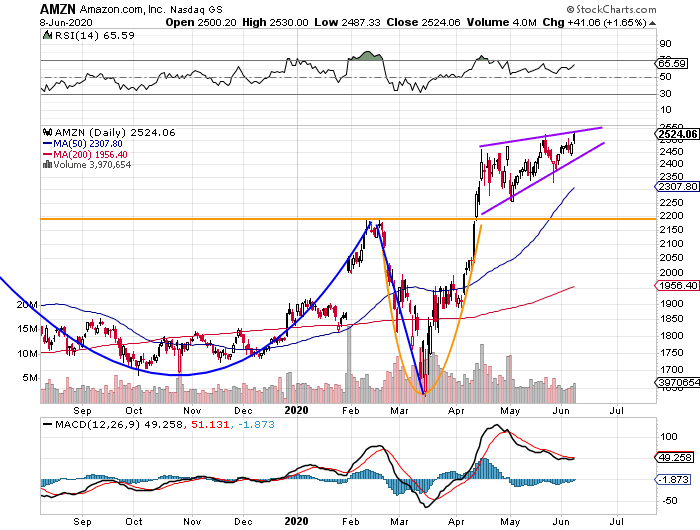 Readers are comfortable with this chart by now. I have added a purple flag. I would indeed prefer that this flag would have sloped downward rather than upward, as that would in my opinion be more representative of a bullish continuation pattern. This, I see as really still just pushing the break-out of the cup with handle pivot that gave us the $2,625 target price in the first place. I need to see that spot before I can move on.

Yes, analysts can take a target from a level still unmet to an even higher level. Traders do not have that luxury. This is the difference between being paid to have an opinion and being paid only if correct. Traders are either correct, or out of business. Hence, targets must be acknowledged as either right or wrong, at least in this line of work, prior to adjustment.

Don't get me wrong. We still need analysts, and we value their input. They just don't need to be right in order to eat.

Get an email alert each time I write an article for Real Money. Click the "+Follow" next to my byline to this article.
TAGS: Federal Reserve | Futures | Investing | Markets | Stocks | Technical Analysis | Trading | U.S. Equity | Coronavirus