During the fast-paced and always informative Lightning Round of the Mad Money program Wednesday night, one caller asked about Funko, Inc. (FNKO) . I never heard of the company before today, but Jim Cramer responded without hesitation. "I like Funko very much. I think it's pretty good."

In the daily bar chart of FNKO, below, we can see a big rally last year and a deep correction. Prices have come back with the broad market since late December, and the technical indicators have strengthened. FNKO is trading above the rising 50-day moving average line and the ascending 200-day average line. The shorter 50-day line is poised to move above the slower-to-react 200-day average line for what is often called a golden cross.

The volume pattern is interesting in that we see heavy volume/turnover into the September zenith, and a recent volume spike on stronger than anticipated earnings figures. The daily On-Balance-Volume (OBV) line was stable the past six months, but it has begun to tilt upward in recent weeks signaling that buyers of FNKO have slowly become more aggressive.

The Moving Average Convergence Divergence (MACD) oscillator crossed above the zero line in January for an outright go-long signal and recently turned lower for a "take-profits" sell signal.

In the weekly bar chart, below, we see that FNKO is a recent IPO, so we have a limited amount of price history to work with at this stage. FNKO is above the rising 40-week moving average line.

The weekly OBV line shows a rise from the middle of December, telling us that buyers are more aggressive. The weekly MACD oscillator has crossed above the zero line for an outright go-long signal.

In this Point and Figure chart of FNKO, below, we can see a recent upside breakout and a $29 price target. 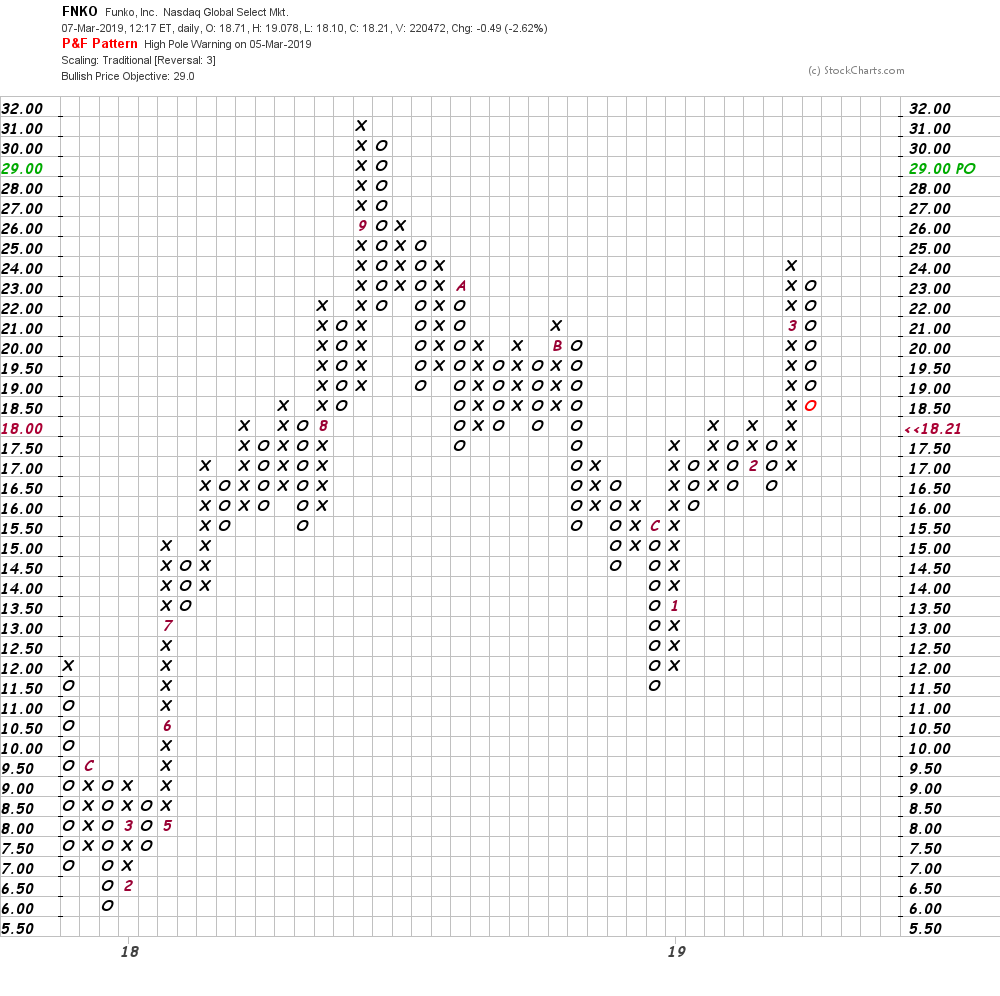 Bottom-line strategy: FNKO charts are pointed up at this juncture, but without much trading history, I find myself being cautious. A decline to $16 would turn me neutral.

Get an email alert each time I write an article for Real Money. Click the "+Follow" next to my byline to this article.
TAGS: Investing | Stocks | Technical Analysis | Consumer | Consumer Discretionary