It happens in every slasher movie. Usually before the herd of innocents is completely thinned out. The deranged killer, seemingly now dead, arises only to slash some more. Are U.S. equity markets trying to bottom? Have they bottomed? I define a bear market as any prolonged condition where I, myself, find it difficult to make money in the manner that had previously been productive. That said, for those that need statistical verification... has the bear been repelled at the gate?

My short answer is going to be a quaint "no." To review, a nasty quarter for stocks that has culminated with a methodical December puke-fest, has evolved this week to produce an epic half-day Christmas Eve rout, the largest single day rally in the history of the Dow Jones Industrial Average, and then the most-robust one day recovery for domestic markets in many years. Violent? Yes. Healthy? Not even close. My dear Virginia, yes, there is a Santa Claus -- but this Santa is no kindly gentleman. This Santa comes with a vengeance, and a special kind of ruthlessness guided only by money flow and momentum.

This pain. The acute pain of this month ending -- in addition to the broader, generalized pain of the entire quarter -- has produced large imbalances in the dollar value of assets held by various funds, largely pension funds that operate with a mandate to rebalance themselves as the end of a defined period approaches. In other words, say that a fund runs with a mandate to hold 55% of its value in equities and 40% of its value in debt securities, and due to market conditions, the value of these assets has moved away from this mandated balance. Then said fund must act to rectify. Nothing discretionary about it.

Some estimates made the rounds across the financial industry over the past week, that showed the expected rebalancing of such funds to result in more than a $60 billion aggregate time stamped buy ticket for the stock market. Other estimates ran higher, even much higher. Regardless of the actual number, this imbalance results in record forced buying of equities over a short time period, in a marketplace that offers limited liquidity, with no humans at the controls. Other than that, everything is operating just fine.

Some of these large buy programs that we have seen may be the resultant acts of these funds already in motion. Some may be electronic traders simply playing the expected market reaction in scale. You have seen the 2/5 Treasury spread reverse the recent inversion. You have seen the 2/10 Treasury spread expand to more than 20 basis points. Yes, that is also part of this rebalancing. Away from these temporary phenomena, the conditions of political and global uncertainty that brought the financial marketplace to its proverbial knees are all still looming.

I have been going over some of the various business and sentiment surveys for the month of December. There is some air leaking from the balloon. Is this meaningful? It is in the sense that these certain conditions bear close watch as the lights of the holiday season melt into the snows of January. Winter.

First, we glance at the various Fed district manufacturing surveys. The Empire State, Richmond and Kansas City all to one degree or another illustrate weakness across New Orders, Unfilled Orders and Shipments. They do this while still sporting general strength in Employment and Inventory building. Hmm, this is an unwelcome inversion if I might say so... peaking employment coinciding with perhaps withering demand for such labor. To be fair, the underlying data coming out of Philadelphia does not confirm, and Dallas does not even report their survey until this Monday. Anticipation is the sport we play here. Data dependency means you have already lost. Understand?

Now, let's hop over to Thursday's December numbers for Consumer Confidence, as released by the Conference Board. On the surface, it is still a very strong survey, despite the sharp decline from November. Peering into those numbers, we find that the weakness is in expectations for job prospects, expected business conditions and six-month plans for both home and auto purchases. In short, the weakness is forward looking. That dour look into the future was more or less confirmed by the University of Michigan survey published last Friday.

Why Am I Telling You All This?

My thought on this is that extreme short-term volatility will produce extreme long-term loss of public trust. The longer these negative conditions persist at the point of sale, exacerbated by academics publicly stating their own trajectory for monetary conditions, the greater the negative impact on public expectations.

Such statements completely miss the point that this nation has never experienced a tightening cycle while the central bank unwinds an over-sized balance sheet. Never. You have not gone through this before. Neither have I. Such statements also display the complete dismissal of an entire generation of young adults who have grown up with low rates. Interest rates are prices. Prices are the results of human behavior as impacted by the artificial manipulation of the central bank over a decade.

These young adults perceive these rates as high, and that same generation having come of age in a more-difficult environment than we ever did (so get off your high horse), tends to be frugal. Monetary policy, as is economics itself, is merely art, not to be confused with science. In order to effectively opine on policy and its impact upon human response, one must understand this first.

The belief has been around for decades: Simplified, it is the practice of investing in the "Dogs of the Dow" -- or the 10 or so worst-performing stocks among the thirty included in Dow Jones Industrial Average -- at year's end for the coming year. A little more complex thinking suggests that perhaps these "blue chips" are toward the trough of their individual business cycle and should, under normal conditions, recover somewhat -- performance enhanced by a now increased dividend yield. Of course, that assumes that management felt no need to cut said dividend payout.

Well, good news for those oddballs who both often thought about this kind of investment strategy but have never acted upon it -- and also have thought about buying the shares of International Business Machines (IBM) . You folks will get the chance to invest in IBM for the second year in a row. Just take a look at this stellar two-year performance. 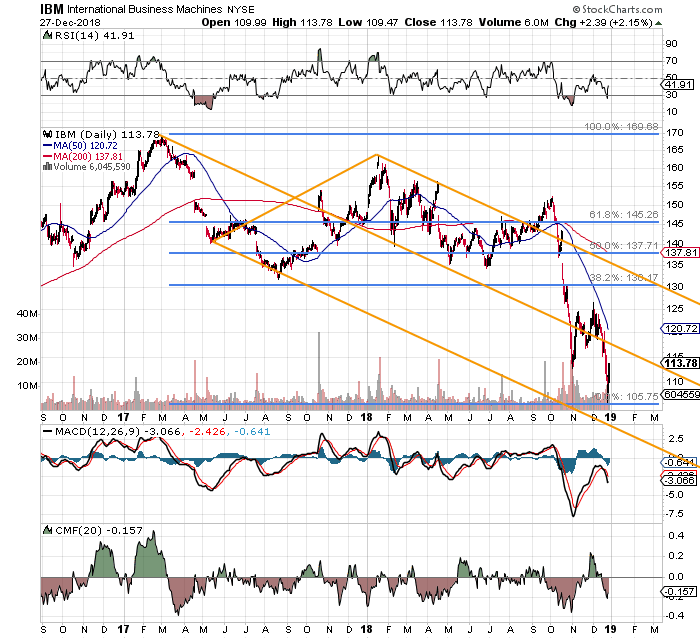 As one quickly sees, December 2018 has dished out a -24.8% performance from Big Blue. The name did find support at the 105 level, which believe it or not competes a round trip that began in early 2016. The shares now stand a rough 33% lower than they had at their early 2017 highs. In fact, a success story is not how one would describe the past seven or eight years for this name.

After a number of fits and starts, some seemingly successful, others clearly not, the firm in late October announced the $34 billion acquisition of Red Hat (RHT) in order to profit from the planet's move toward cloud computing. In mid-December, Red Hat missed third-quarter expectations for revenue, while beating EPS expectations. Did IBM pay too much for RHT? You be the judge.

IBM trades at 8x forward-looking earnings for a reason. The firm runs with a number for total debt more than 3x the cash and equivalents that the firm has on hand. Profit margins are unspectacular. Industry consensus is for slight revenue contraction from FY 2019 into FY 2020.

I started writing this segment as a trade idea based on a 'blue chip" firm that would likely not underperform yet again, based on the two year chart. I have talked myself out of it. Buying the dogs of the Dow? Not generally a bad idea, especially if one thinks the trade war gets ironed out amicably. Maybe just stick to Caterpillar (CAT) , Goldman Sachs (GS) , and 3M (MMM) .