I have used many musical references to lead off my columns, but I never thought I would use 2 Live Crew. Liberty or libertad, is a hot topic these days, as Cubans take to the streets to demand rights that have been denied to them under the past 62 years of communist rule. God bless these folks, and the rappers (grouped together as the San Isidro Movement, who recorded the now world-famous anthem Patria v Vida, slightly deeper than 2 Live Crew's usual fare) who are fighting for basic freedoms.

This is what we do. All of us. No one at Real Money is not a capitalist.

But I am tasked to write about stocks, with the flavors of geopolitics mixed in, and not the other way around. There are disturbing images coming not just from Cuba, but also South Africa -- for different reasons -- and Venezuela is basically never peaceful. What if the people win? What if freedom and liberty coincide with the inevitable economic innovation and economic expansion driven by opening of formerly closed economies. Is there a liberty ETF?

No, of course not, but there are ways to play the opening of economies. In October 2004, iShares launched its FXI China ETF (FXI) at about $18 per share, and by October 2005 it was trading above $70 per share. Of course, FXI would be eviscerated in the 2008 crash, and now stands at $44, making its long-term, since-inception performance actually pretty mediocre. But we are looking for 2004-2005 here, not the bigger picture. How do we get the initial jump as folks play the opening of a closed economy?

In the case of Cuba, the island simply isn't populated enough -- 11 million people -- to drive such a consumer revolution, and that sends me back to natural resources. Cuba is, according to the IMF, well stocked with nickel and cobalt, which is often a by-product of nickel mining, but the small island pales in comparison to the Democratic Republic of the Congo in total cobalt output. There is a Toronto-based play, Sherritt International (TSE:S) that operates a refining operation in Saskatchewan-based on cobalt and nickel mined from a JV in Moa, Cuba. As much as I love the TSX these days, though, Sheriitt is a little far afield, even for me.

The world will need more nickel, graphite, manganese, cobalt and copper as the transportation fleet electrifies, but batteries are not the only game in town. Cuba doesn't have any offshore oil deposits to speak of, but major benefactor Venezuela does. I have mentioned my research coverage for OHM Research out of Sao Paulo in several RM columns, and my list is below. The "Emerging Hydrcarbons" subset is entirely composed of Caribbean and/or African plays. 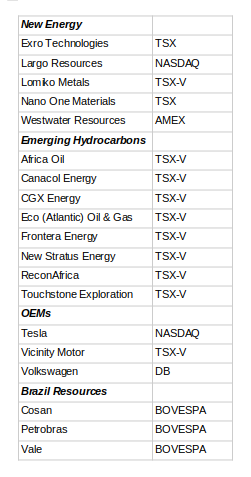 So, it is back to the acceptance of dual modalities again, something a mass murderer like Fidel Castro could never do. The world is going to move to electric cars, and battery materials will need to be sourced from many locations, although Africa is probably the winner there. But as that transition occurs, the world will still have a profound need for hydrocarbons, especially natural gas, which in liquid form (LNG) is being pitched (successfully) as a transition fuel, owing to its lower carbon content than black oil.

So, we will need more cobalt and  we will need more hydrocarbons. These (mostly Toronto-based) companies that exploit those resources may not be as beloved by "woke" fund managers as Tesla (TLSA) , which actually is given a poor score by some ESG ratings agencies, but they are entering into an era in which their capital will earn mighty returns. That's what matters or should matter to investors.

My favorite cliche of late has been "it's a great big world out there." Through the magic of equity research I have been fortunate to see a large chunk of it. Researching stocks has taken me to every inhabited continent. I have seen some amazing instances of nature's beauty, but it has always hit me that people are what drive the planet, as opposed to the bizarro Larry Fink-Janet Yellen-imagined apocalyptic world, in which it is the other way around. People in Cuba are crying for freedom now, not for air conditioning. Natural resources, and the wealth created from them, can help those people. That may not be true in 20 years, but my investing time horizon is slightly shorter than that.

Get an email alert each time I write an article for Real Money. Click the "+Follow" next to my byline to this article.
TAGS: Emerging Markets | Investing | Stocks | Emerging Markets (South America, Asia, Middle East) | Electric Vehicles

Now, as big earnings reports drop, the question is whether we'll see a pullback. Here's why.

I'm On the Other Side of the Natural Gas Speculation: Try These 3 ETFs

Natgas is so full of classic bear traps but consider these ETFs based on their individual risk tolerances.

Coeur Mining Is Making a Comeback

Let's take a look at the charts and indicators to see what's attracting investors.