A sink full of dishes.

The dogs need to walk.

I did not see.

Morning spreads across the beautiful sky.

What rises is different. Now.

Gone? Not the spirit.

At a glance last Friday's session would appear largely inconsequential. The S&P 500 gained small ground as the Nasdaq Composite moved gingerly in the other direction. Trading volume at both the New York Stock Exchange and the Nasdaq Market Site printed well below Thursday's levels.

Odd? Perhaps not if there had not been a surprisingly poor print for job creation put to the tape that morning by the Bureau of Labor Statistics (BLS) that came complete with downward revisions to prior months. Perhaps not if Fed Chairman Jerome Powell had not spoken publicly that day in the final appearance by a Fed official going into the committee's official black-out period ahead of a policy decision (Sept. 18).

Powell made mention of a Fed that has "seen fit to lower the expected path of interest rates." Powell credits the Fed with supporting this economy while blaming uncertainty around trade for hurting both business investment and confidence. Powell also made mention that the Fed is not forecasting a recession.

By the way, your pal can't remember a time when our central bankers accurately sounded the alarm, but hey, that's just me.

Oh, one more thing. The Federal Open Market Committee (FOMC) was raising short-term rates while simultaneously drawing down the balance sheet, all based on BLS estimates that we now know to be faulty as the BLS will revise lower job creation for the 12 months ended in March by an estimated 501,000, or 40,000-plus per month. No mention of that glaring error in policy implementation as a factor in declining business investment or confidence.

When wrong, own it. Makes life easier.

The real news from an equity market perspective on Friday may have just been the sideways action that afforded the broader indices the ability to digest Thursday's gains that had allowed them to score significant technical gains, breaking above their respective 50-day simple moving averages (SMAs). You can see the broad fund manager reaction on the chart.

Has China Overplayed Its Hand?

The first hint came last week, as the Chinese Ministry of Commerce seemed uncharacteristically eager to announce the planning of a meeting between higher-level U.S. and Chinese negotiators after the Oct. 1 deadline that President Trump had set for the next increase in tariffs upon Chinese imports into the U.S. (Oct. 1 is a key date in China, as large celebrations are planned commemorating the 70th anniversary of the communist military victory in 1949.) At first, my gut told me that this may be an effort to try to provoke the U.S. president to delay that deadline, thus giving the communists an opportunity to look strong going into that date, and thus score one for the propaganda machine.

As the Chinese government has made public an effort to hold the line on going back to relying upon fiscal stimulus (how many empty cities does a nation need?), the PBOC (People's Bank of China, the not-so-independent central bank) was busy Friday announcing reductions to reserve ratio requirements (RRRs) amounting to 50 basis points for all banks, effective Sept. 16, and an additional 100 basis points for qualified city commercial banks to be implemented in two tranches (Oct. 15 and Nov. 15). This larger move is the seventh cut that the PBOC has had to make to the RRRs in roughly a year and a half and will free up 800 billion yuan in liquidity. The secondary moves will free up another 100 billion yuan. For those keeping score, 900 billion yuan exchanges for more than $126 billion. What gives?

Those paying attention on Saturday night learned that exports from China actually declined year over year for August, falling well below expectations, as global economists had expected demand to be pulled forward ahead the broader U.S. tariffs levied on "finished goods" that went into effect on Sept. 1. By the way, imports into China continued to collapse, indicative of reduced demand, while the nation's trade surplus missed the mark by a wide margin.

Has China overplayed its hand in trade negotiations? You may have seen a piece in The Wall Street Journal over the weekend stating the case that based on private data for "corporate profits, tax revenue, rail freight, property sales, and other measures of activity that they believe are harder for the government to fudge" (yes, that's a quote.). Some economist think the Chinese GDP numbers could actually be as much 3 full percentage points lower than posted.

Have businesses, in effort to best maintain margin, started moving supply lines (that will likely never return) out of that nation, finding cheaper homes? German exports, by the way, surprised to the upside for July, despite what seems like a series of never-ending disappointing macroeconomic data points for that European Union (EU) nation going into the report. Hmmm.

Away from the trade war, on top of a rapidly slowing economy, protesters are still waving American flags in the streets of Hong Kong, and Taiwan is still looking to load up on tanks and fighter aircraft. Yeah, there is pressure, even on a president for life.

I suspect moving forward that there may be a little more give and take as far as trade negotiations go, at least for now. We'll see. Equity valuations here in the U.S. have been moving higher and certainly have the feel of a market that is not done.

Fed Under Pressure, Too

The Atlanta Fed's GDPNow snapshot for the third quarter is currently running at 1.5% annualized. That will not be updated until producer prices and wholesale inventories hit the tape this Wednesday. At present, futures trading in Chicago is pricing in a 91% chance of a 25-basis-point reduction made to the fed funds rate next week, with a 9% chance of no cut at all. This is in response largely to the idea that the European Central Bank (ECB) will not be as aggressive in easing monetary policy as previously thought. The ECB goes to bat this Thursday, by the way. A lot of what the ECB does will depend on how happy it is with a euro that appears to be stabilizing above $1.10 per.

Dollar valuations are something that the Fed needs to consider as well. We all know that FactSet is projecting third-quarter S&P 500 earnings growth of -3.6% on revenue growth of +2.9%. I have gone over this in the semi-recent past. The premise has not changed, and the potential impact is indeed worthy of reiteration.

Think I pound the Fed on dollar valuations just for the heck of it? Half of that group is still citing economic performance when evaluating the need for a rate cut, completely unaware that this ballgame is much more about the dollar and the forward messaging implied by the yield curve than it is about data representing past performance. Imagine any other job, your job being quite so forgiving for not being pro-active.

By the way, the economic data is getting a bit wonky. The U.S. economy is now in overt industrial contraction. Employment data has become inconsistent after having been weaker than thought all along. That S&P 500 yields considerably more than U.S. 10-year notes. Anyone else see a problem? The consumer will save us... unless fewer consumers work for less money. That might be a nasty. ECB Thursday. U.S. consumer level inflation Thursday. Retail Sales Friday.

Apple Inc. (AAPL) hosts a product launch event in Cupertino on Tuesday (tomorrow) in order to unveil the next tranche of iPhone offerings. The name may get hot Monday into Tuesday. The $215 level remains technically significant.

Got a call from the Colonel last night. The Colonel is one of the smartest humans I have ever known, and a better trader than I am. I was asked for an opinion on 3M Co. (MMM) . Badly beaten over five of six months was my first thought. Highly exposed to trade as well as economic growth came to mind next. Who wants an industrial name like this when trade is uncertain? Who wants an industrial name like this while growth is ebbing? Who wants to invest in a management team that has not seemed to navigate the current environment very well at all?

Actually, I had thought of the name several times over the past week, without taking action. Despite margins that have come under pressure as well as total debt that has grown versus cash and equivalents, return on assets, return on equity and the firm's current ratio have all been improving. At less than 17x forward earnings, these shares are trading in line with its sector and probably at a slight discount to the S&P 500. There is also the annual dividend of $5.76, good enough for a 3.5% yield, or 218% of what the U.S. 10-year note will pay. Well above core inflation as well. 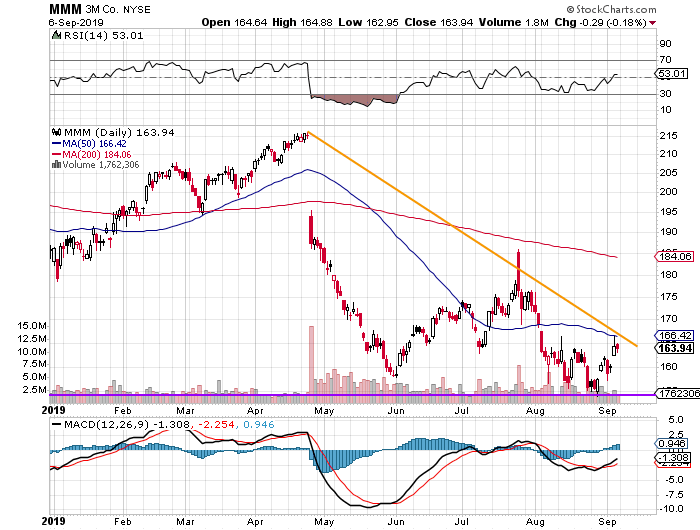 The thing I see here is series of rapidly declining highs bucked up against a more stable series of declining lows. Descending triangle? That would be bearish, but it is a little sloppy. There is a good chance that this is a double bottom. That would be bullish. The shares are up against the 50-day SMA, with the daily moving average convergence divergence (MACD) as well as Relative Strength at least pretending to set up for a breakout. My gut, and my trust in the Colonel, have me thinking that this name can perhaps earn a spot on my book. Positive trade news later this month would propel a name like this. Earnings are due in late October. I expect to enter this name this week.

Note: Net basis after the options sales will come to $160.84. My target price for the equity would likely be the 200-day SMA of $184. However, October calls with strike prices that high are not worth enough to provide value. Support above 154 has been established, hence the 155 level for the puts. Don't forget, a dividend payment most likely of $1.44 or so would be paid in November based on the firm's track record. If still around, that would further reduce net basis to $159.40.