We sort of expected that would happen. Not the way it happened, but that equity prices would struggle on Tuesday, or at least at some point this week, after Monday's terrific rally. There is both good and bad in what is immediately apparent, at least technically.

From a human perspective, what transpired is surely disappointing. We all want not just the U.S. and global economies to experience a V-shaped recovery, we also want our own quality of life to return to a level that probably was not quite appreciated for what it was in real-time.

Let's put it straight. We have been talking and writing about different slopes for an economic recovery for months now. Jim Cramer even went over a number of possible shapes on Mad Money on Tuesday evening. I have often written that I expect the reverse square root symbol, which assumes a V-shaped start and then at some point prior to full recovery a longer move sideways. I borrowed the concept from Dartmouth economist Danny Blanchflower, but I have not seen it discussed broadly.

I happen to think that in a world sans a vaccine for Covid-19, or at least effective therapeutics, this is the most likely outcome. Even in a best-case scenario, where there is a V-shape, the right side of the V will surely rise far more gradually than was the drop in economic activity that produced the left side of that "V." Colleague Peter Tchir has been all over this of late.

Markets, especially equity markets, by nature, lead. They are forward looking, or so we are told. The recovery in equity markets is obviously way out in front of any partial economic recovery. Thanks to the policy makers, and a lift off of the zero bound in the speed of transaction, as regional economies try to roll out the reopening, carefully. A reopening that comes ahead of the protection that we all hope will be provided at some point from the community of scientists who are working on solving this public health crisis.

Economic necessity? Almost certainly. Risky? Even more certain. This is precisely what set up both the Monday rally and the late Tuesday selloff. The fact that above all things, the virus is still in charge.

I read everything that Moderna (MRNA) released on Monday. I also read the piece on Tuesday published at Stat News that cast a shadow of doubt on the selectivity of what had been released from the Phase 1 clinical trials that Moderna's mRNA-1273 vaccine candidate had completed. Markets went from projecting confidence to projecting confidence shaken in the blink of an eye. The Nasdaq Composite gave up just half of one percent. The S&P 500 a full percent, The blue-chips more than that, and the small-caps even more. This was a partial unwind of Monday's move toward the types of names that would benefit the most from a more rapidly and fully reopened economy.

The obvious negative would be the still-unfilled gap created in between Friday's trading range and Monday's trading range. Do gaps always fill? I have seen instances where they do not. That said, they usually do, even if it takes time. That suggests at least a retest of Friday's highs. 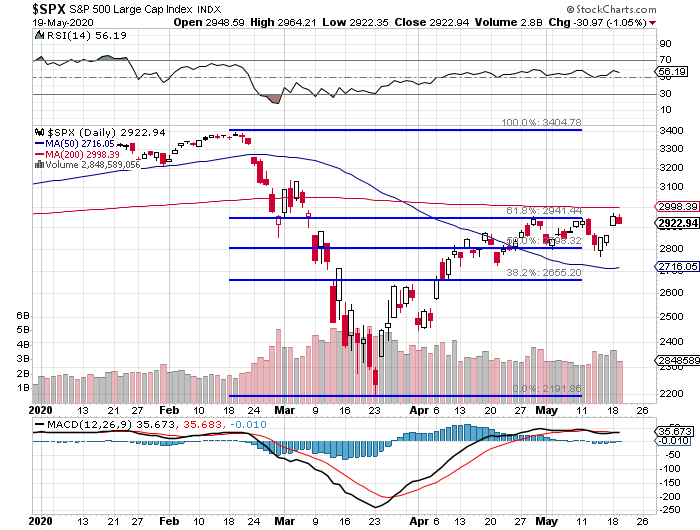 I show you the S&P 500 for brevity, but this gap is visible across the equity universe. Does it bother me that, more specifically, the S&P 500 has hit resistance in the same area code six times now since late April? Sure. Are there positives? You bet there are.

For one, while one might draw a straight line across the highs over three or four weeks, there is little doubt that a series of higher lows are also being built. Should this persist, this chart could end up building an "ascending triangle" pattern. That would be bullish. First, perhaps a base is built amid all of this back and forth volatility. At least that's what Helene Meisler wrote for Real Money on Wednesday morning. Should Helene be on to something here, this would be another market positive.

Far more short-term, we look at Tuesday's trading volume, which did drop off significantly from Monday's levels. In fact, across constituent S&P 500 membership, this volume stood well below any of the previous three regular sessions, which were all "up days."

The question for us, is simple. Was this lack of volume due to a lack of institutional distribution, or simply because the index traded sideways until the final hour of regular trading on Tuesday? We should know more about how the portfolio managing community feels in just a few hours. Equity index futures are trading higher as the dark hours pass, but this has less and less meaning these days than it has probably ever before. Hope? We should all continue to hope. Trust? I'll just speak for me. I trust nothing.

The words were spoken on Tuesday by Boston Fed Pres. Eric Rosengren. The full sentence reads, "Public health solutions are paramount -- without them, it will be virtually impossible to return to full employment." Rosengren expects conditions to improve from where they are, but also cites the risks associated with broadly reopening businesses prior to fully halting community spread of the underlying virus. Rosengren sees elevated levels of unemployment until there are effective solutions in place. He's not wrong.

Almost all economists understand that the second quarter will be a "throw away" by necessity. The Congressional Budget Office now projects Q2 GDP will contract at a whopping annualized pace of 38%. The Atlanta Fed's GDPNow model is tracking the quarter at -41.9%. The investment community will also have to look past the quarter. According to FactSet, S&P 500 earnings in aggregate are expected to contract 40.6% for the quarter, year over year on revenue that contracts 10.6%. How far ahead do we look?

As we have already mentioned... "The virus is still in charge." FactSet sees earnings contracting 19.7% for the full year. The CBO sees the possibility of an economic constriction of activity that lasts well into 2021. All the while, the nation increases its reliance upon deficit spending, a condition likely to weigh upon economic growth for years, even after that future day that the sun rises in earnest.

In all honesty, even the most thought out and most highly developed economic models at this time rely upon the unknowable. Should this frighten you? I think maybe the health-related aspects of this virus should probably provoke heightened caution. As for the economy, my thought is that it is best to be pragmatic. Celebrate small victories as they come. Stay focused. Stay agile. Stay narrow. Maintain flexibility. If those paid to know do not know, then neither do we.

Though both the Fed Chair and the Treasury Secretary have, in my opinion, exceeded expectations in terms of performance through the early days of this crisis, it became apparent that in terms of what they see to their front, there are overt differences. Fed Chair Jerome Powell has really never wavered through a number of recent public appearances.

Powell notes that a fear of human contact will suppress economic activity, and projects a future that will require even more fiscal support, as well as increased help on the monetary side. Mnuchin is, in my opinion, more optimistic out past the second quarter as economies reopen. Mnuchin seems to see the greater danger in the possibility that extending economic suppression will create "permanent damage." Mnuchin, just my opinion, might be a little slower on the fiscal trigger going forward, given his druthers.

Both of these leaders are correct. More will be needed, and the longer businesses are shuttered, or forced to continue at reduced capacity, the more lasting the damage will be. On top of that, without confidence in public safety, will laborers who have been forced to the sidelines even choose to participate, if they are even in such a position to choose?

Have I mentioned that the virus is still in charge? The House and the Senate will work out another fiscal deal. The price tag will almost certainly come to less than the $3 trillion asked for in the House bill, but probably still end up quite large. Will there be a trade? Will the Senate agree to more help for states and localities than they are comfortable with in exchange for increased liability protection for employers trying to restart their own economies? It's all a matter of degrees played as a game of chicken in an election year. What could possibly go wrong?

Long-Time Sarge fave Lockheed Martin (LMT) recently landed a $6 billion Pentagon contract to produce interceptors and other parts for the Patriot anti-missile defense system. Lockheed turned around and said it will pay out another $300 million to the firm's suppliers in addition to the $450 million already paid to those subcontractors negatively impacted by the Covid-19 pandemic.

On Tuesday afternoon, Lockheed stated that starting this weekend, shifts will be divided at the Fort Worth plant where the F-35 fighter jet is manufactured in order to avoid layoffs. Lockheed will have to slow the pace of delivery of the lucrative fighter craft, as the public health crisis has caused a shortage of necessary parts.

Of the 141 F-35's that Lockheed had committed to delivering to the U.S. and allied militaries this year, the firm now expects to fall short of that mark by between 18 to 24 aircraft. Just FYI, Lockheed delivered 131 F-35's last year. 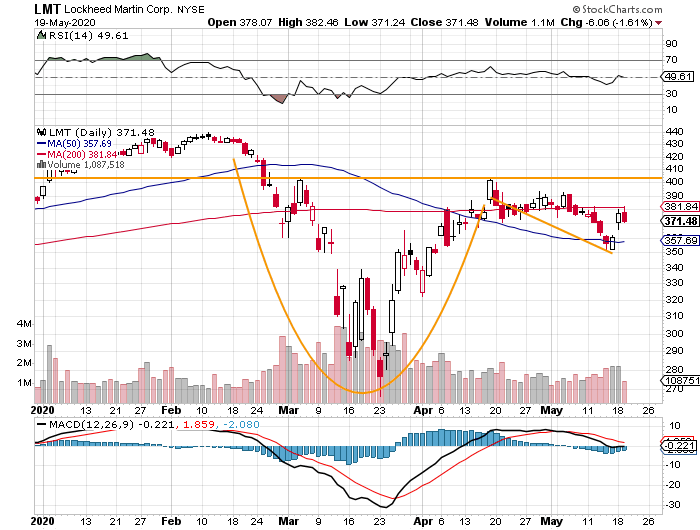 As readers will note, these shares have built a nice looking cup pattern with an also deep and lengthy handle. While the pivot remains well to the north at $402, the shares appear to have hit trouble at the 200 day SMA of $381. My panic point had been $375, and I did take off 30% of my long last week at that level as a precaution.

Do I still believe in the name? Yes, LMT has always been a long-term investment for me, and has always required that the investor be wiling to live with a certain level of volatility. When will I add that 30% back on? Not just below the 200-day simple moving average, I'll tell you that much. I see two ways to go with this. Either I tack on some shares on a retest of the 50-day SMA ($357), or on momentum above the 200-day, but of course that would be smaller add in terms of share count.

Get an email alert each time I write an article for Real Money. Click the "+Follow" next to my byline to this article.
TAGS: Economy | Federal Reserve | Investing | Markets | Politics | Stocks | Trading | U.S. Equity | Coronavirus