Companies aren't getting credit for putting up great results this earnings season, Jim Cramer told his "Mad Money" viewers Wednesday. That was the case with Ford Motor (F) Wednesday as shares dipped after the automaker slashed forecasts in response to the ongoing chip shortage.

In his first Executive Decision segment Wednesday night, Cramer spoke with Jim Farley, CEO of Ford, who said Ford is on the right path forward. As for the chip shortage, Farley said initial estimates predicted the shortfall would affect between 10% and 20% of Ford's production. Farley expects the second quarter will be the trough and he's optimistic for the second half of the year.

Newer vehicles continue to drive the momentum at Ford, Farley added. Its new electric Mustang Mach-e is completely sold out, he said.

Let's check on the charts and indicators of Ford, which is a holding of Cramer's Action Alerts PLUS charitable trust, and received an upgrade to buy Thursday from TheStreet's Quant Ratings service.

In this daily bar chart of F, below, we can see that prices have risen the past 12 months. F tested the rising 50-day moving average line earlier this month and could do so again Thursday morning. Prices remain comfortably above the rising 200-day moving average line. The On-Balance-Volume (OBV) line has largely moved sideways this calendar year, but a move to a new high is not far off. The Moving Average Convergence Divergence (MACD) oscillator just moved below the zero line for a sell signal but it may not need much of a price rally to reverse to the upside.

In this weekly Japanese candlestick chart of F, below, we see a mixed picture. Prices are in a longer-term uptrend above the rising 40-week moving average line. Notice the large lower shadow the other week, telling us that traders rejected the lows. The weekly OBV line shows a dip in March and April, but that might be a temporary phenomenon. The weekly MACD oscillator is crossing to the downside for a take profit sell signal and not an outright sell message.

In this daily Point and Figure chart of F, below, we can see a lot of price history. Prices have reached a price target of $13.25 but the trade at $13.50 in March (look for the "3" on the chart) is an important upside breakout in my opinion. 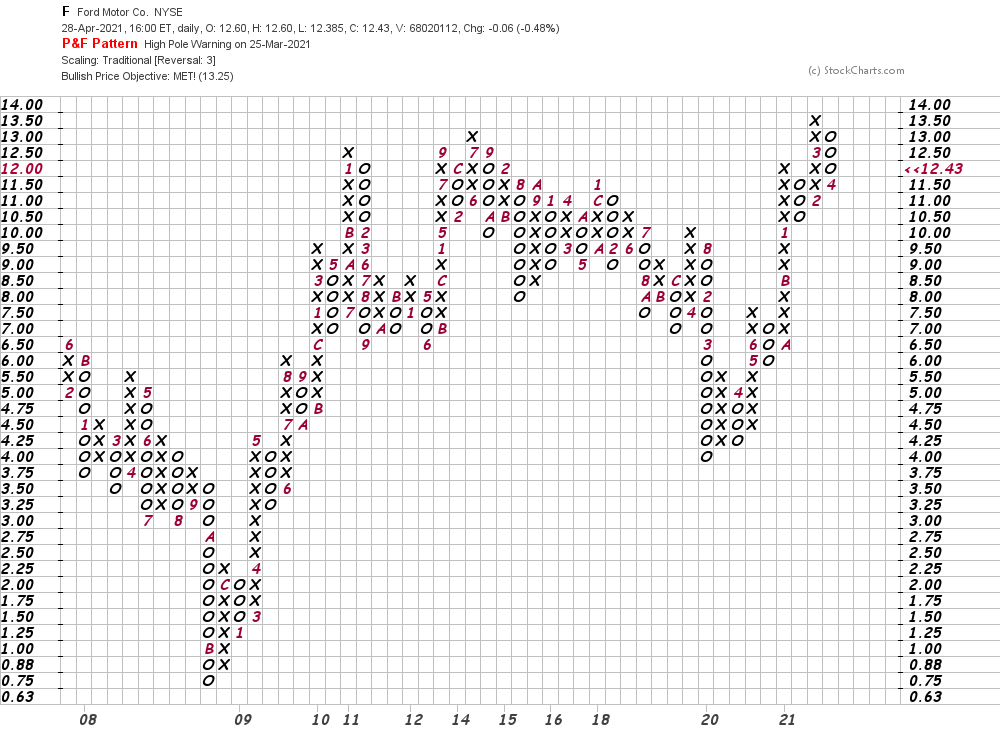 In this weekly Point and Figure chart of F, below, we can see a potential longer-term price objective in the $23-$24 area. 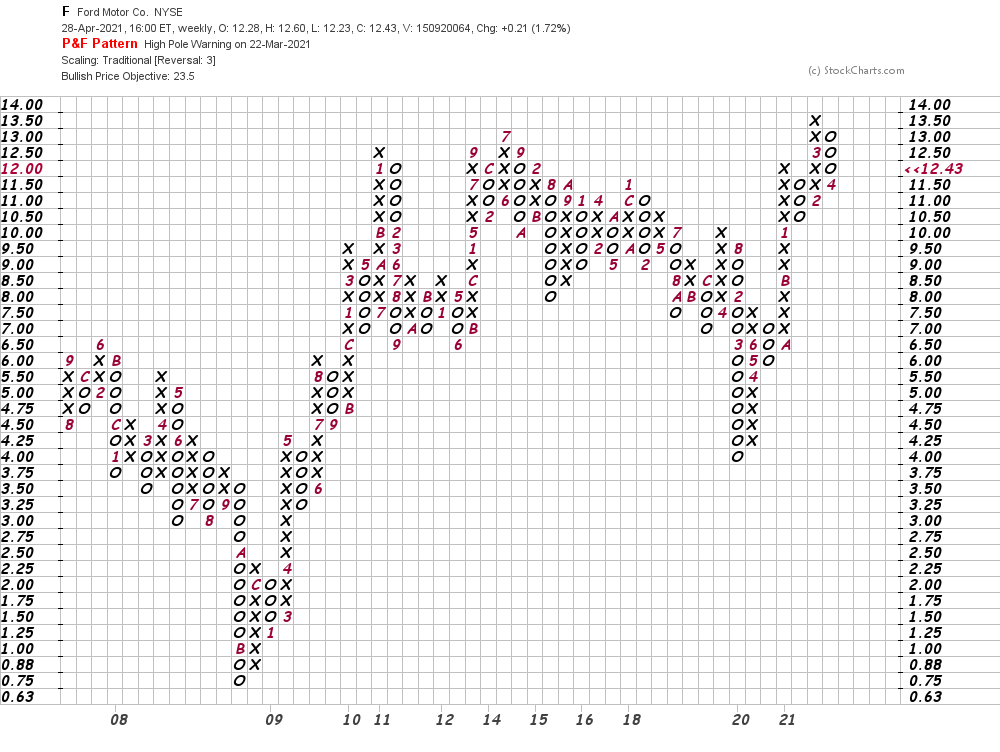 Bottom line strategy: The price of F could dip toward $12 this Thursday morning but the move may be short-lived. A higher close today would not be a big surprise as markets are forward-looking. I would recommend buying short-term price weakness, risking a close below $11. The $24 area is our price target for later in 2021.

(F is a holding in Jim Cramer's Action Alerts PLUS member club. Want to be alerted before Jim Cramer buys or sells these stocks? Learn more now.)

Get an email alert each time I write an article for Real Money. Click the "+Follow" next to my byline to this article.
TAGS: Earnings | Investing | Stocks | Technical Analysis | Automotive | Transportation | Mad Money | Executive Interview | Real Money | Electric Vehicles