Jim Farley started working at Ford Motor (F) back in 2007. Remember late comic actor Chris Farley? Yeah, the Ford CEO and "Tommy Boy" are cousins. Now you see it, don't you? Back to our story.

Jim Farley took over as CEO of Ford in October 2020, succeeding Jim Hackett. Farley has always been a car guy, working for the Lexus division of Toyota Motor (TM) prior to taking a job with Ford. Farley also serves on the board of Harley-Davidson (HOG) . Farley's grandfather reportedly worked at Henry Ford's River Rouge Plant back in 1914. The industry is in this guy's blood. It's as if he was born to be at the top job in Ford precisely when Ford needed a leader. Incredible.

Let me take you back in time, to May 26, 2021. It was a Wednesday. The Mets and Yankees were both home and both rained out that day. I don't remember my basement flooding. The day also happened to be the day of Ford's much-anticipated "Capital Markets Day" event. Ford confirmed planned changes in the way it would operate. About 40% of all Ford volume would be all-electric by 2030. Spending on the transformation from a fossil-fuel-driven automobile manufacturer to one much more electric was forecast to rise above $30 billion by 2025.

The company also announced the creation of its Ford Pro vehicle services and distribution business. This operation would be dedicated strictly to the requirements of commercial and government vehicles. Farley had a turnaround plan when he took over the largest automobile employer in the U.S. The plan was simple, yet difficult -- to make Ford's traditional businesses more profitable and to be better positioned to meet demand in emerging businesses such as electric vehicles.

Oh, I almost forgot. During that May investor day, there was mention of a joint venture with SK Innovation of South Korea to manufacture battery cells in the United States.

The day was Monday, Sept. 27. Yesterday. The still Detroit, Michigan-based automobile manufacturer announced a partnership with South Korea's SK Innovation to invest a combined $11.4 billion (Ford's commitment adds up to $7 billion) to construct two massive plants, one in Stanton, Tennessee, and one in Glendale, Kentucky, and a third smaller site also in Kentucky, to build electric trucks and batteries. This will be the largest investment in Ford's manufacturing infrastructure over the course of a corporate history that goes back to 1904.

Site No. 1, Stanton, is dubbed Blue Oval City and will aid in building Ford's expanded electric truck lineup. The sprawling site will cover six square miles, cost an estimated $5.6 billion and create 6,000 jobs. The second site, in Glendale, will be dedicated to the manufacture of electric batteries. This plant is expected to cost $5.8 billion and create 5,000 jobs. Two of the three sites are expected to be online by 2025. All three are expected to be up and running by 2026. Ford now expects 40% to 50% of its global production volume to be fully electric by 2030. The 40% figure is no longer the goal, but the floor.

The beautiful thing here is that Fraley has been making the media rounds. He acknowledges supply chain constraints and chip shortages that still prevent Ford from meeting demand. Even in this environment,. Ford is taking on no debt in order to make this commitment. Farley says that the investment will be made strictly from profits. He did say that production was up for the third quarter from the second quarter and he said it with a little bit of gusto in his voice.

Ford is expected to report its third-quarter results in about a month. The street is looking for earnings per share of about $0.27 on revenue of $33.1 billion. These numbers would be year-over-year minus ticks, and that's expected. Both would be up significantly in sequential terms, which is roughly when the impacts of these shortages started to really take a toll. 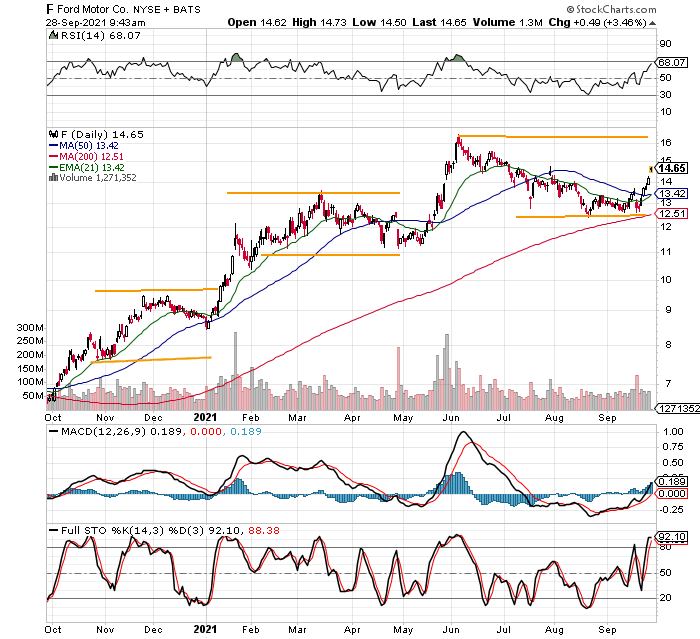 This is a chart solely of Ford's performance under Farley's leadership. See the pattern? Measured gains followed by basing periods of consolidation. It's almost as methodical as a step ladder. Any more of this and Farley may be added to Sarge's Mount Rushmore of CEOs. The shares appear ready to enjoy a mini or swing trader's golden cross (21-day exponential moving average crosses above the 50-day simple moving average). That could provide technical support in a weak tape.

Both the FSO (Full Stochastics Oscillator) and RSI (Relative Strength Index) are coming in a bit hot, but the daily moving average convergence divergence (MACD) is nowhere near ready to rest. I think -- and I am long, so I am biased -- that Ford Motor is just getting started. The name is currently my sixth-largest allocation and my 11th-best performer. I expect to be in the name for the foreseeable future.

Get an email alert each time I write an article for Real Money. Click the "+Follow" next to my byline to this article.
TAGS: Fundamental Analysis | Investing | Stocks | Automotive | Real Money | Electric Vehicles