My bet is that many readers might have a garage a lot like mine: Old tools and yard care equipment stacked on shelves lining the walls, an old washing machine over there, an old desk in another spot. My hockey stuff is still set up like I am going to play tonight. I have not played in an organized game since 2007. In between all of that stuff is the junkyard: Boxes, decorations -- Halloween through Valentine's day all in one giant mess. Underneath all of that stuff, and barely visible, was what remained of an athletic youth that had melted into adulthood. Iron. Lots of weights, standard, not Olympic. I am that old. My bench, lat machine, preacher curl support, an old slant-board, and a nice selection of dumbbells and kettle-bells. All still there.

So, I am a gym rat. Always have been. So is my 20-something son. This is our story: Last night, we did something that I would not have even thought of doing until springtime. We cleaned out that garage. Took most of the evening. Why? Simple. We live on Long Island. There are now at least 100 people on Long Island being watched for the coronavirus. There are others in Westchester. Does anyone really think that if there are three suburban counties watching folks that may have been exposed to the virus that the five far more densely populated counties that make up New York City are in the clear? Hmm.
We're thinking that instead of going to our local gym and sharing sweat with strangers on shared equipment that maybe we just workout in the garage. The equipment is antiquated, but 100 pounds that weighed 100 pounds in 1985, still weighs 100 pounds in 2020.

What if my son and I are not the only ones. What if other gym rats are going to look for other ways to exercise that do not expose themselves to grunting steroid freaks and spin classes stuffed with 20 or more sweaty, heavy breathers? On Tuesday evening, Planet Fitness ( PLNT)  beat Q4 expectations for both earnings per share and revenue. The revenue print was good enough for year-over-year growth of 9.8%. Though impressive, that was a deceleration of sales growth, but a slowing of the pace, we thought had been priced in.
Since releasing those results, Planet Fitness has been hit hard. Very hard. 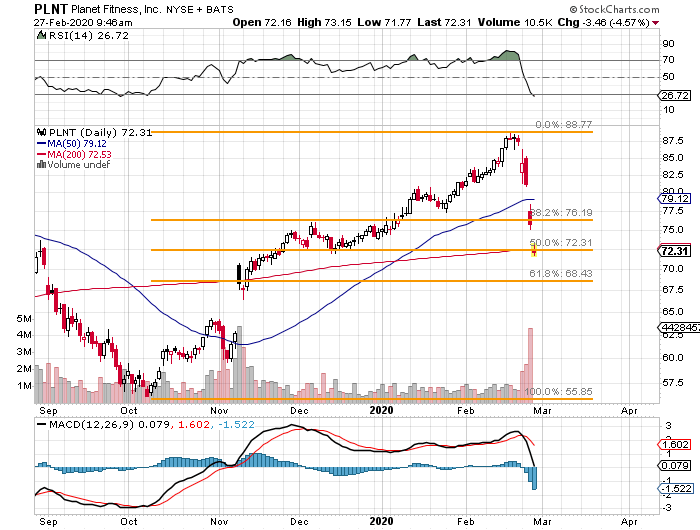 Within less than a week, this name has surrendered its 50-day simple moving average, and now battles to hold onto both the 200-day SMA and a 50% retracement of the October through February run. Over the same few days, the stock has also gone from overbought to oversold in a technical sense, while the daily MACD has gone from rather strong to rather awful. Fear does that.

Peloton Could Get a Workout...

But look at Peloton ( PTON) , now. I have not been bullish on his name for a number of reasons. Among them, there are more economic ways to get similar workouts. But Peloton does make it convenient, and if the gym is not an option, then neither is the equipment at the gym that the user may have relied on in conjunction with streaming services that compete against Peloton. Suddenly, if more folks are going to try to work out at home, Peloton is a much more viable name, in my opinion.
Peloton had reported in early February, and the stock basically went straight down in response. Even though the firm had beaten expectations for both earnings and revenue, the sales guidance offered had come in a little light. 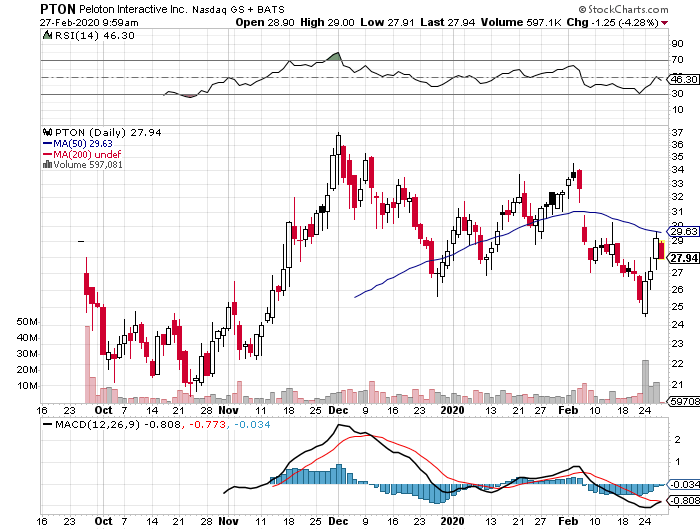 The shares are lower today amid a very tough tape. One sees that there has been resistance at the 50-day line, but that the daily MACD is not really too far away from sending a bullish signal. Just an idea, but unlike some coronavirus plays that could be more temporary, should consumers take the plunge whereas working out at home is concerned, they are likely financing what is expensive equipment to do so, while subscribing to a streaming service. That's recurring revenue. That's what the firm calls "connected fitness" and this segment has been growing faster than expected, while sustaining a 93% retention rate.
I have always liked the concept of Planet Fitness, an inexpensive gym where all body types and personalities can feel comfortable, but the contagion is a barrier to investment for now. I don't expect to become a Peloton customer anytime soon (I already have a treadmill, and a bike), but I am thinking that enough others might. I think I likely enter the name in entry level size on today's weakness.
Get an email alert each time I write an article for Real Money. Click the "+Follow" next to my byline to this article.
TAGS: Luxury Goods | Investing | Stocks | Commercial & Professional Services | Health