Suppose you were bearish Wednesday as the S&P 500 closed a bump above 3,900 and the Nasdaq Composite closed around 11,545, but are wildly bullish and suffering from fear of missing out here on Thursday after the indexes gained between 1.8% and 2%. In that case, it's time to re-evaluate your process. Because while I started writing about the likelihood of a near-term bounce Tuesday morning, I don't expect Wednesday's rally to make it much further than the 21-day exponential moving average (EMA) or volume-weighted average price (VWAP) anchored to the mid-August swing high.

It's nearly impossible to look at an Invesco QQQ Trust (QQQ) chart and not spot the areas where sellers are lurking. If demand is strong enough, we might see a bullish continuation toward those mid-August swing highs. But for now, I want to target the two areas circled in yellow on the chart below as my sell targets. 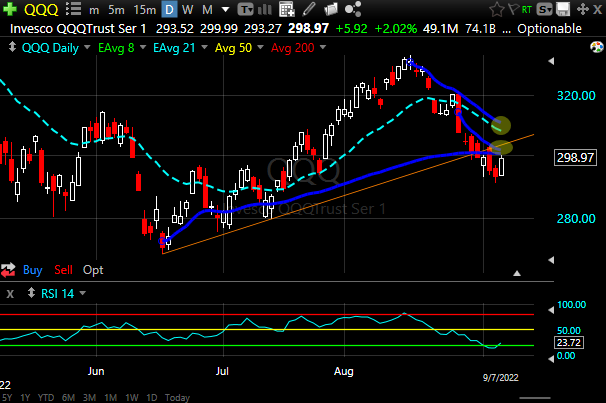 As oversold as the Nasdaq and the other indexes are over the near term, we need to remember that the Fed isn't in our corner. Based on the narrative from the Fed's Jackson Hole symposium, we should expect rates to stay higher for longer, which is never helpful for equities.

The next risk event on my radar, and probably yours, is the August Consumer Price Index inflation report. That report is set for release next Wednesday, Sept. 13.

While the decline in unleaded gasoline should help pull the inflation rate down, I'm not sure it will be enough to impact the Federal Open Market Committee's rate decision at the end of the month. If stocks are closer to Tuesday's lows heading into the CPI report, I'd be tempted to take down some out-of-the-money calls on QQQ or the SPDR S&P 500 ETF (SPY) . On the flip side, if QQQ and SPY are trading closer to their VWAPs anchored to the mid-August highs, I'll plan on going into that report flat.

Either way, until I see a better setup, I'll remain in very short-term trading mode with an eye toward taking profits into expected resistance zones. For what it's worth, a better setup will need to occur from above the 21-day EMA and 50-day simple moving average.

Get an email alert each time I write an article for Real Money. Click the "+Follow" next to my byline to this article.
TAGS: ETFs | Index Funds | Indexes | Investing | Options | Stocks | Technical Analysis | Real Money