So, here's the big question: What can someone tell you about Apple Inc. (AAPL) prior to earnings that no one else knows?

The answer: probably nothing. Apple isn't the most overly owned stock in the universe, but the tech giant is covered by practically every company that employs an analyst.

This is why I take the same approach to earnings for Apple that I've taken on other huge names. I'm interested in recent history. Over the past one to three years, what has the reaction been to earnings? My focus is on the size of the moves more than direction.

Additionally, I examine the continued action. Do we often see reversals, continuations, or a haphazard pattern?

It worked well for both Netflix, Inc. (NFLX) , and Alphabet Inc. (GOOGL) , so why not continue the trend?

Apple is pricing a move of 5.1% between the close of business on Tuesday and the close on Friday.

From a single-day closing basis, this is about a 50/50 proposition in terms of a move greater than 5.1%.

The vast majority of the closes do land in the 4-7% range, so a long volatility, short volatility play feels like one where as a trader you'd get chopped up by commissions and emotions.

In other words, it is a coin flip, about the same as trying to go direction, but with results that are likely much smaller whether right or wrong.

One pattern that has emerged is the stock closing in an extension from the open.

In other words, if it opens lower, then the close is lower than the open and vice versa. We've seen this with five straight quarterly reports.

Continuation has been the Apple theme. 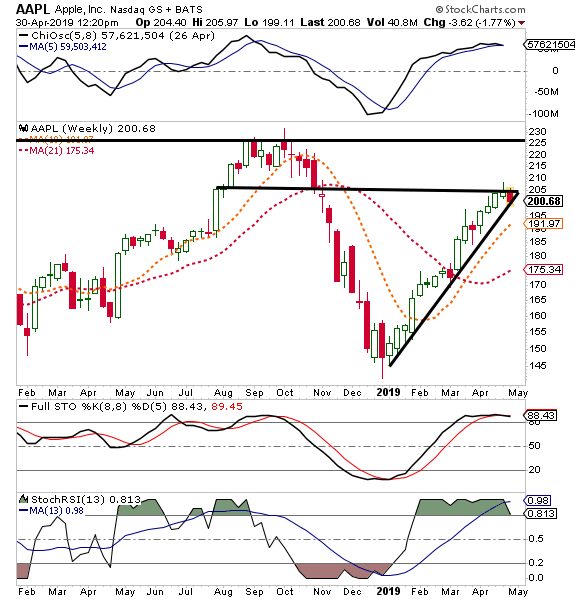 Projecting out eight days post-earnings close, and the stock continued in the same direction nine out of 10 times. Moving out to 13 days, that drops to only seven of 10, but the continuation moves are larger.

The same can be said at 21 days, with eight out of 10 times experiencing a continuation with some very large moves.

Basically, the best play for Apple will likely be to sit it out Tuesday night and watch the reaction Wednesday. If we see a continued move between the opening and close, then following that move for a trade that expires in the next eight to 21 days has a high degree of success if a conservative approach is taken.

That means if the stock opens down, say 3%, then closes down 4%, taking a put spread that maximizes profit on a continued move lower of 2-to-5% should have a decent chance of success.

I would correlate time spread width with the time until expiration. Shorter timeframes will require tighter spreads.

Apple does display a tight price pattern on its weekly chart. A breakout or breakdown could easily spur a move of $20 in either direction, so keep a close eye on Wednesday's action.

We're set up for a big move and now we simply need the market to deliver.

Get an email alert each time I write an article for Real Money. Click the "+Follow" next to my byline to this article.
TAGS: Earnings | Investing | Stocks | Technology | Television Production/Distribution | Telecom Services | Stock of the Day | Earnings Preview