Stocks are struggling to hold the gap higher from Tuesday morning. The number of names in the red after reporting earnings Tuesday morning before the bell and Monday after the bell dominates compared to the number that are green.

This was my initial expectation heading into earnings. If you want to get long FAANG or related names set to report soon, then this is absolutely what you want to see. Your ideal setup into these earnings is a ton of negativity and low after-earnings reactions.

Although you never want to offer up a name for sacrifice to the market Gods, disappointment from Microsoft (MSFT) could propel that negativity to a level worth buying into the reports from Apple (AAPL) , Amazon (AMZN) , Alphabet (GOOGL) and Facebook (FB) later on this week.

If you want to toss Shopify (SHOP) into that group I would do so. It's not hard to add an S to the FAANG group. We've already started to mangle the acronym anyhow.

While I love the Advanced Micro Devices (AMD) and Xilinx (XLNX) deal, this is a scenario where two worlds collide. I'm not talking about the companies, though. Instead, I'm referring to the fundamental versus technical picture.

The combined companies should come out as a powerhouse in the tech space. The overall product reach should challenge any other semiconductor company in the world. Fundamentally, AMD is sacrificing some growth for net profitability. I'm good with this as it should provide cash flow and consistency to expand the company's more growth oriented and aggressive projects.

Unfortunately, the technical picture for AMD is one of concern. 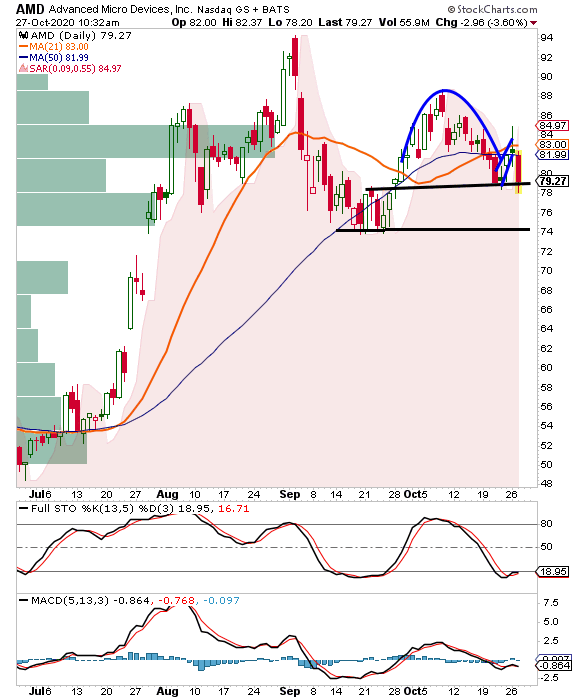 The good news is it appears to be short-term in nature based on the daily chart, but it is one that could send the stock back to $74. And if $74 fails to hold, then the stock could trade to the low $60s simply based on momentum.

What has formed recently is a bearish cup and handle. Yes, these can work both ways. It's not textbook as this price pattern is a continuation pattern and one could argue we aren't really continuing the drop from the August highs.

Although I don't agree with that conclusion, I could understand the logic behind the argument. However, if AMD closes under $79 Tuesday, it opens up the previous trading range of $74 to $78.

I would consider a bounce play off $74, but would only consider a put spread under $79 until AMD tested $74 or traded back above $82. Secondary indicators show the stock is oversold, but the initial bullish crossover attempts failed. Remember, oversold can stay oversold, so that's another thing we need to watch.

The real fear comes into play if $74 fails. There's virtually no support until the low $60s. Even worse, there are two open gaps waiting to be filled.

If $74 breaks, expect that gap to the $69-$70 area to get filled in a hurry. The other gap is $10 lower from there and would require either a big earnings miss from the company or a severe market correction. Know that it is there, but the odds of us seeing it without giving traders an opportunity to exit or play the gap fill are low.

AMD is a name that should stay on trader's screens as I anticipate it will be volatile and provide opportunities both long and short. If you aren't watching it, I would start. It's got an outline to follow. In the current environment, that's exactly what I want to see.

Get an email alert each time I write an article for Real Money. Click the "+Follow" next to my byline to this article.
TAGS: Mergers and Acquisitions | Earnings | Fundamental Analysis | Investing | Stocks | Technical Analysis | Trading | Semiconductors & Semiconductor Equipment