At first glance, most financial journalists looked at Thursday's Federal Open Market Committee (FOMC) policy statement and saw nothing all that important, nothing that should cause all that much concern. Please stay with me here, because it is important that everyone who does not understand monetary policy starts doing so right now. This includes the membership at the committee in Washington, D.C. No more faking it, or not really putting in the work. It's not too late, Jay Powell. You have not yet let the horses out of the barn, but the barn is not yet on fire, either. We are still in the warning stage.

The most significant change in the language of Thursday's FOMC statement was the following admission: "Household spending has continued to grow strongly, while growth of business fixed investment has moderated from its rapid pace earlier in the year." Earlier in the year, Jay? Try the Sept. 26 statement. That same reference simply reads, "Household spending and business fixed investment have grown strongly."

Nice spin. What happened in the meantime?

Core Capital Goods Orders printed in sequential contraction for both August and September. Construction Spending showed no growth in September. None. Zero. Nada. Core Retail Sales have not only missed expectations for two straight months, but hit the tape in outright month-over-month contraction for September. Do I need to go into housing, Jay? Do I really need to? There's more forest behind the tree line, and the enemy hides behind every rock and every fallen log. Wake up.

Think market prices for crude are going to support headline inflation? Do you? Not to mention what those prices say about global demand, and global economic growth. Go ahead, force artificial dollar strength. What could possibly go wrong?

I don't just blame the Fed, but the forward-looking trajectory for monetary policy must become elastic, must become flexible -- right this minute. Gradual means every two month. That is clearly not gradual, Tex. If the work is not done, you do not go to bed at night. That's called discipline. That's what a personal code of honor demands. It is what I demand of you if you are going to serve this flag. Either make it so, or get out of our way.

Those at the central bank prefer that you and I forget about their balance sheet. You remember quantitative tightening, right? What's that? It's just the draining of $50 billion of potential liquidity from the nation's economic slush fund every single month.

The balance sheet is so high, you say. Yes, you are correct. Too high, but unwinding like this is putting the economy in a difficult spot before it has to be. Keep in mind that national fiscal policy is unsustainable. Keep in mind that the damage to the yield curve caused by the Fed's Operation Twist seven years ago has never been repaired and seems now to be semi-permanent. Keep in mind that banks need to hold onto much higher reserves overnight than they had historically due to post-crisis regulation. A larger slush fund is necessary unless you unwind the reasons why.

This is not difficult, but it is work. Think the employment picture holds up, do ya', sport? What comes after declines in spending on capital goods?

It doesn't take a genius. I could get wonkier, but I've probably lost half my readership already. I need the good citizens to understand. Have you ever climbed a mountain? The view is beautiful. That's where we are right now. Realization hits. You pushed yourself too hard to get there. Your legs hurt. Your back hurts. You're not sure that your shoulder is seated correctly in its socket. You need clean water and shelter. Now you find fresh dung. Bear? Cat? That's where we are going. By the time you reach shelter, you won't give a rat's tail about that magnificent view.

West Texas Intermediate (WTI) crude entered bear market territory on Thursday. At zero dark thirty Friday morning, market prices for this commodity have been dragged even lower by that dollar strength that comes on top of rising domestic inventories. If this level holds, Friday will become the 10th consecutive day of declining prices. What, me worry? You would think that with the spread between Brent and WTI standing quite comfortably at roughly 10 bucks, that there would be a nice vig in the middle for refiners, even for oil services. That demand for the sweet stuff might ramp higher. No dice.

What now? Articles running in high-end business newspapers that Saudi Arabia might be looking into bidding the OPEC cartel a fond farewell are not going to help as that could mean, if not intentionally, that the kingdom is OK with these price points and needs not to be restricted.

How do you think Russia reacts to that? My gut says that they compete. Again, it doesn't take a genius. Expectations are for the supply side to become more constricted as the year moves into its final weeks. Not if this story develops. My thoughts as an equity guy? I'm not dumping my high-dividend payers, and that includes my energy longs. The reason is simple. You all know that I am using rallies to shave profits and raise cash as we move into what is usually a stronger time of the year. Dividend payers are part of a more defensive posture. If I am wrong? I will be grateful.

What Does the Fox Say?

I really have no idea, and I have spent a great deal of time in wilderness environments over the years. Thursday night really separated the adults from the children. On the one hand, The Walt Disney Co. (DIS) really knocked the cover off of the ball. Revenue growth of 12% for a company of that size is incredible. Free cash flow was off a bit, but not as bad as I had thought it might be. I did take some off on Thursday morning. Fortunately, I did leave about two-thirds of that long in place, and even if I do have to pay up to get that tranche back (I won't) the puts that I wrote along with that sale raised more premium than the repurchase will cost, even if I do end up paying these prices.

How great was the growth in Studio Entertainment? Wow. Not to mention the optimism around the developing streaming services. I am excited for Disney, and adding on coming dips caused by broader market factors seems wise for this name, at least to me. (Disney is a holding of Jim Cramer's Action Alerts PLUS charitable trust.)

By the way, while Disney was out kicking some tail and taking names, there were a few names taken to the woodshed on Thursday night. Down goes Activision Blizzard Inc. (ATVI) , down goes Skyworks Solutions Inc. (SWKS) , and down goes Yelp Inc. (YELP) . Yeah, that's what the Fox says. The Fox says "yelp." I think.

The was much ugliness to be shared as Yelp, the online provider of local business reviews, reported an earnings beat that was badly overshadowed by a revenue print that fell short of projections. Problem? Yes. Severe problem? Perhaps.

Yelp guided full-year revenue well below consensus on Thursday night. The cause? Yelp for some bazaar reason apparently went to a non-term advertising model that allows unhappy customers to take a hike as soon as they think that they are unhappy. Psst. They seem pretty unhappy. Talk about fragility in a business model. Gee whiz. The question for those of us who scour the night for opportunity becomes simply: Can we make some dough here? 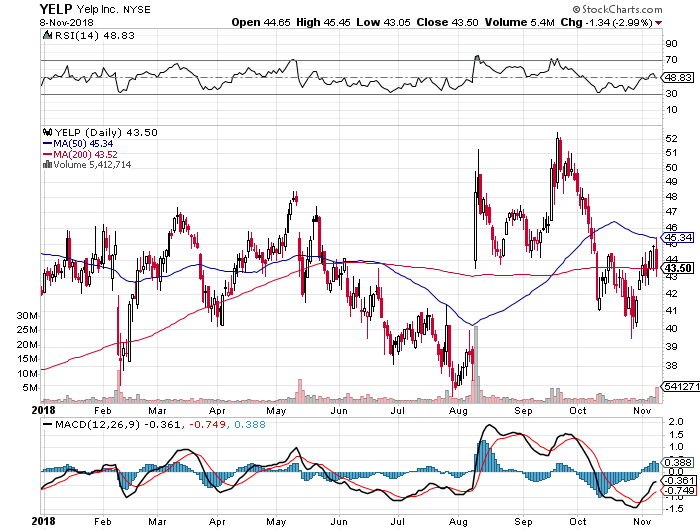 See this chart? Yeah, it's useless. The stock is trading around 30 bucks here in the dark hours. The stock is broken; I wouldn't buy it with your money. Now, if you want to talk options, there will be an opportunity somewhere. How to price it? This may be one of the rare occurrences where I can bless the purchase rather than the sale of options in general.

My thought is this: As of Thursday, the September-through-November range for this stock spanned almost 13 clams. When the bell rings on Friday morning, that range might be something like 22 bucks. YELP, if anything, is consistently volatile. I think that if a trader can get a January straddle at local strike for seven or eight bucks (no way to accurately price this yet) that the risk/reward may be in the trader's favor.

For those new to options, a straddle is really easy to understand. In minimal lots, a straddle is simply the opening purchase (long) or sale (short) of both one put and one call with the same strike price and the same expiration date. This strategy basically guarantees that one side will expire worth something and the other worthless. The only way to profit from this trade is for the underlying equity to move away from the strike price by that expiration in greater distance than the aggregate net debit if long the strategy. Easy peasy.

I know some of you newer traders still may have trouble understanding. It's better to ask than not ask. I am happy to answer your e-mails or comments. Making you stronger makes us stronger. We are a team. Note: Opportunities where straddles actually work come few and far between in my past experience.