Well, maybe not all of them.

While nearly all who ponder the trajectory and impact of such controversial subjects as monetary policy have anticipated this Wednesday afternoon's dog-and-pony show for quite some time, there are those who clearly have taken a leap of faith ahead of the jugglers and the plate spinners.

While I am unsure of just how dovish leadership at the Federal Open Market Committee (FOMC) reveals itself to be later on, trading volumes for securities listed on the New York Stock Exchange (NYSE) and Nasdaq soared on Tuesday as the S&P 500 (SPX) moved sharply north from the 50-day simple moving average (SMA) that had acted as support for more than a week.

The Nasdaq Composite? That key index finally broke through the same line. Possibly significant would be the fact that this line had been a difficult hurdle for the Nasdaq Composite (COMP) to overcome. Just my two cents: Both of these broad indices are now closer to being short-term overbought, though not quite there, than they have been all week, leaving them at least a bit susceptible to potential profit taking in response the FOMC's official statement, economic projections and press conference.

The problem for markets could be this: Futures markets have priced in reductions to the fed funds rate, first in July, then again in September, and then a third cut in January 2020, after a what looks like a close call in December. The FOMC's dot plot is an absurdly simplistic tool originally intended as a method of telegraphing what Fed officials see as future economic conditions and their view of where the Fed's fed funds rate would be as a result. Unfortunately, the dot plot has not worked out well as a tool for transparency at the central bank and only revealed the broad lack of those on the committee to see the future any better than might the rest of us. In short, the dot plot is rubbish, and I imagine those placing dots know it. Unfortunately, keyword-reading algorithms do not.

Still, even with the recently dovish signaling messaged by those at the Fed, it will be difficult for the Fed Chairman Jerome Powell or those who must place their dots upon a tool that should have already gone away to match the enthusiasm for lower interest rates that both the markets and the body politic have shown. Please understand that I am a hard currency type at heart, but I think the FOMC must reduce short-term rates in response to how foreign central banks are setting up and because of a yield curve that they themselves helped to badly invert through their own stubborn refusal to heed folks far more adept at interpreting human response to economic conditions, and thus, financial markets.

If this afternoon's activities are to match what futures markets are pricing in, then the official statement, the dot plot and the Fed chairman are all going to need to appear somewhat rattled. Maybe I'm wrong, but I don't expect them as a group to go quite that far.

Surely, it was not just market anticipation of "Fed Day" that had winners beating losers at both of New York's major exchanges on Tuesday, or that saw 367 stocks hit new highs between the two locations. Even the small- cap Russell 2000 (RUT) closed above that laggard's 50-day SMA.

Well after European Central Bank (ECB) President Mario Draghi energized global markets with a new version of his "whatever it takes" stance on monetary policy -- somehow these guys never figure out, despite broad evidence that going past zero percent interest rates to the downside and pushing on from there actually ends up being restrictive and non-accommodative. Turns out that working for a living and struggling to feed a family ends up being more helpful here than a PhD in economics. Who knew? Besides, can anyone here use anything other than a sledge hammer? -- U.S President Donald Trump tweeted later on that he had "a very good telephone conversation with President Xi of China. We will be having an extended meeting next week at the G-20 in Japan." That is all the markets needed at the time. The fuse had been lit. Even White House economic adviser Larry Kudlow tried to temper expectations. "We will see. We'll know a lot more when it happens" was his response. You likely noticed the Philadelphia Semiconductor Index (SOX) run a rough 4.3% on that news as industry groups that have taken the most punishment in response to rising tensions between the planet's two largest economies turned and ran higher.

This bit of news adds an extra dynamic to the Fed's decision here on Wednesday afternoon. While, at least in the short term, the potential for a limited deal with China that pauses the trade war and delays the potential cold war would clearly be a positive development, does that possibility force the FOMC to be a little more cautious in its message regarding the impact of negative trade relations on domestic economic growth? I think it might. Though this conflict is really more about strategic influence at both the regional and global levels and dominance over 5-G technology, how can the Fed be expected to interpret that?

The City of Love

There are some obvious winners to be taken from the Paris Air Show so far this week, and quite frankly you, or at least I, did not see some of them coming. First and foremost, I don't know if casual observers understand just how big the order for 200 Boeing (BA) 737 Max aircraft placed by International Consolidated Airlines Group (ICAGY) , parent of British Airways, really is.

At list prices, the deal is worth an estimated $24 billion, but it's not about the money, even though after discounts the deal will likely come to less than half that sum. It's about ending a drought and taking business away from Airbus (EADSY) .

That latter bit is a shock. Yes, Boeing had gone through an orders drought. It did help a bit that since the Air Show kicked off that Korean Air agreed to order 20 787 Dreamliner aircraft and lease 10 more. It did help that Amazon.com Inc. (AMZN) agreed to lease 15 more Boeing 737 cargo planes to increase its fleet to 20. But the International Consolidated Airlines order, to be delivered from 2023 to 2027, is the first large order of 737 Max passenger craft since the two 737 Max crashes that revealed problems that have left that aircraft still grounded.

Bear in mind that International Consolidated Airlines had been almost exclusively a client of Airbus for its single-aisle fleet. The fact that Boeing was able to take a large order away from its primary competitor prior to even submitting a software fix for the 737 Max to U.S. regulators is just astonishing.

You know who else benefits here? That's right. General Electric Co. (GE) . These 200 aircraft will run with engines provided by CFM International, which is a joint venture between GE and France's Safran.

On Monday, IndiGo, India's largest airline, placed a $20 billion order for jet engines with CFM. On top of that, the Amazon lease deal was done through GECAS, or General Electric Capital Aviation Services. Indeed, by the year 2021 Amazon Air expects to be flying 70 aircraft. Again, potentially good for GE... maybe not so much for United Parcel Service (UPS) and FedEx Corp. (FDX) .

Just a heads up for those who may have followed me into Zscaler Inc. (ZS) . We're up more than 17% on this trade in just a few weeks. Though the share price has hit resistance at the $80 level a couple times, and though tempted, I am not peeling anything off of the position just yet. I'd rather add if granted a dip, given that I did not get what I consider my fill prior to liftoff. 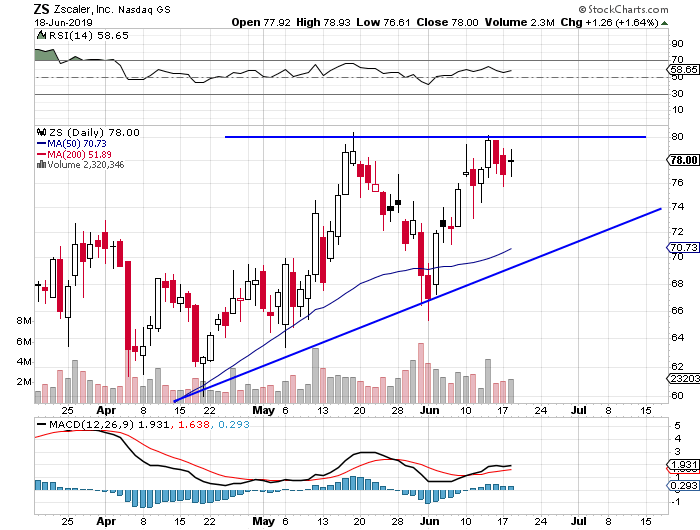 The thing I see is the formation of what is known as an "ascending triangle". This pattern, at least in my experience, serves as a sign of further accumulation, and I see it as a bullish sign that occurs not toward the end of, but rather amid, an uptrend.