No Rest For The Wicked

Broad based. I don't know too many trader types who did not meet the closing bell in a somewhat mild state of exhaustion on Wednesday afternoon. If you weren't fired up... I don't know, there's probably a civil service exam just right for you. Then again, most traders had positioned themselves in a net-long posture coming into the mid-term elections on Tuesday. The trade was crowded, and the trade worked. Don't know how often we say that.

Just how robust was the day's action? Every major domestic equity index simply roared, paced by the Nasdaq Composite with a 2.6% run. Myself? I wrote bullish articles about two stocks on Wednesday. Amazon (AMZN) early on, and Twilio (TWLO) later.

By late afternoon, I had rung the register on an Amazon partial, and taken a synthetic bearish stance in Twilio through an options setup. They ran that far. It was that kind of day. It was difficult to select a favorite sector. Consumer Discretionary stocks were the hottest, though all eleven sectors easily finished in the green, and 10 of 11 scored aggregate gains of at least one percent. Most surprising, at least to yours truly was the strength in Health Care. Not the insurance providers. That strength was understandable. I found the power behind the pharmaceuticals, (not that I am complaining at all), really stunning.

Why no rest? Sit down there, Chilly Willy. Someone is on his way, and it ain't Santa Claus. What do we know for sure? Okay... there is no dog and pony show attached to this afternoon's FOMC policy statement. No press conference. No dot plot. No rate hike. You can write that in stone. However, the central bank as we already know can easily bring the pain.

The implied posture of this statement will be paramount, and will likely change your afternoon. The Fed has been basing the aggressive trajectory for monetary policy on strength in the labor market, and the labor market alone.

You have seen the data released by the BLS last Friday. Job creation, participation and wage growth were all there, and rabidly absorbed by demand without putting a dent in the headline unemployment rate. No doubt this is highly impressive.

We also know from a plethora of corporate outlooks that rising input costs are a concern for many companies heading into the current quarter. The trade condition is a short-to-medium-term negative, even if long-term it gets the nation where it needs to be. These firms that have been cautious in tone are, by the way, who we expect to keep the hiring cycle in high gear. Yes gang, I have seen the monthly JOLTs report.

While the labor condition remains quite robust, the U.S. economy has experienced either weakness or slowing growth across retail sales, the housing market, consumer level inflation and inventory building at the manufacturing, wholesale and retail levels.

Oh, and core capital goods orders have been in the hole for consecutive months, by the way. That's only just about the most important slice of macro in the entire economy, as far as business spending is concerned. Now, answer me this, Batman... if businesses in aggregate are buying less of the equipment they need in order to turn a profit, can anyone in this era of rising input costs honestly expect these businesses to maintain the current pace of demand for labor? This is where the innate ability to reason that makes humans so special actually makes a difference, Jay.

One more thing. If future growth expectations actually supported the idea of further increases to short-term interest rates, does anyone really think that crude oil inventories would be pushing WTI futures for December delivery toward the fringes of a bear market. Anyone? Oh, yes, the more than $10 spread between Brent and WTI would supposedly drive demand toward that sweet Texas Tea. Something's rotten, Jay. Wake up. Now.

The Answer Is Yes

From the "keep your eyes on this" department, the U.S. Treasury auctioned off a rather large $19 billion worth of 30-year bonds on Wednesday. Bid to cover at 2.06 was the weakest seen for this type of auction in nine years. Oddly, the also enlarged 10-year note auction on Tuesday had been much better received by the marketplace. The yield awarded on Wednesday was above the bid in the secondary market at 1 p.m. ET. That's not so great. Indirect bidders only took down 58.9% of the issuance. That's not so hot either.

Is this something to worry about in this era of highly irresponsible fiscal policy? Probably. What do we dislike more... a flattening of the yield curve or the long end of that curve getting away from us? The answer is Yes.

What happens when, within 24 hours, Democrats gain control of the House Rules Committee, and Attorney General Jeff Sessions resigns at the request of the president? Okay now mix in ballot initiatives, where Michigan passes the legalization of recreational use (an estimated $1 billion market by itself), while Missouri and Utah pass legalized medical use? By the way, this makes 10 states that have or will shortly legalize recreational use, and 33 states that have okayed medical use.

You get a rally in cannabis names. That's what. I have been in and out of this space frequently for the TheStreet's premium Stocks Under $10 portfolio, so this is a trend that I have been in and out of for a good while. Thankfully, we were back in going into election day. (Wasn't that hard to figure out. The initiatives were on the ballots, and did anyone have Sessions lasting through the weekend?)

You may have missed yesterday's moves, but the party here is far from over, as there is talk that both New York and Illinois will look to further legalize, not to mention the probable decline of federal opposition now that there will be a change at the top of the Department of Justice.

Names to watch? Canopy Growth (CGC) remains the best in class name in my opinion, thanks to the support that the firm has received from alcoholic beverage manufacturer Constellation Brands (STZ) . Other names of interest would include the always-volatile Tilray (TLRY) , and more retail-investor-friendly priced shares, such as those of Aurora Cannabis (ACB) , Cronos Group (CRON) , and Aphria (APHA) . For those not willing to do quite that much homework in the space, the most relevant ETF, in my opinion, would be the ETFMG Alternative Harvest ETF (MJ) .

Whoa. Got your attention, didn't I? Listen, I am not going to take my entire stake off of the table. I like the Walt Disney Company, I have some nice gains in the name and this stock has not yet reached my target price of $122. So, why then would I make a sale. Let me explain.

The mighty House of the Mouse will report its fourth-quarter results tonight after the closing bell. EPS expectations are for $1.34, or 22% year-over-year growth. Whispers I have seen are in between $1.31 and $1.33. Revenue growth is projected at 8% over last year.

One thing I do not expect to impact the share price will be those numbers, as long as they are "ballpark" close. What will matter more to me as an investor will be comments made on the integration of the assets purchased from Twentieth Century Fox (FOXA) . Also important will be comments made on theme park performance as well as studio performance.

Most important, however, will be the progress made for the firm's direct-to-consumer business lines. In other words, how well is ESPN plus (launched six months ago) actually doing? And how is the stand-alone streaming service service, planned to launch sometime in calendar year 2019, actually progressing. This is key. I want to hear something on the impact on margins of the Fox acquisition and the spending on building this streaming television infrastructure. I am not worried, obviously, about content. Disney has plenty of that. And much of it, contractually, will be permitted to come home some time next year. (Yes, that's a shot at you, Netflix (NFLX) ). 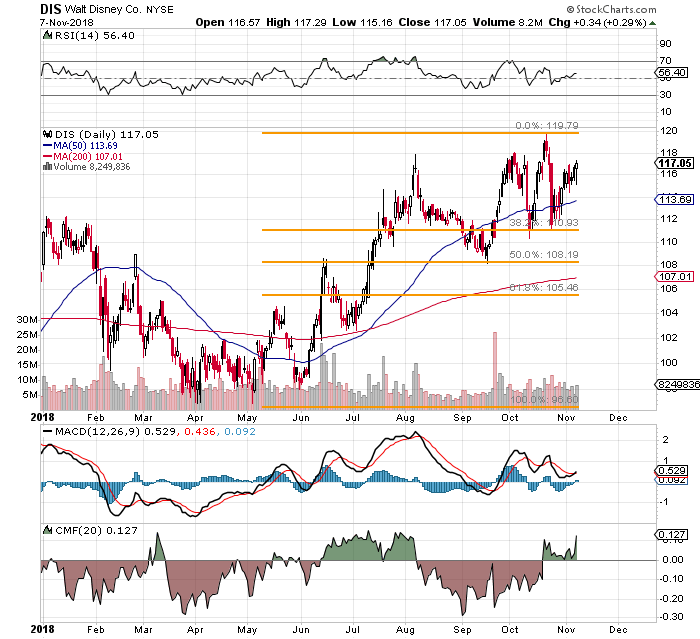 The stock does come into earnings with Relative Strength, Money Flow, and the daily MACD all in the best shape we have seen these indicators as a group since early September. We also see this name hitting resistance in nearly the same neighborhood (in a ballpark sort of way) for the fourth time in three months' time. That only matters if the shares sell off overnight. My target of $122 is still realistic. Obvious support levels appear close to $111 and $108.

Though I am going to shave my long in this name today, I will go into these results long DIS and short some put options. The intent is to cover as many bases as possible while either driving revenue, or forcing myself to buy back shares at a discount. Understand that in the event of a collapse in share price, by selling something now and buying it back cheaper (potentially), even if I end up paying above market value at the time, I will have successfully extracted capital from a position that was making my spider sense tingle. This is simply about risk management.

Assuming a trader is long DIS, as many are:

Unsure? Sell enough to be comfortable.

Something for nothing? Hopefully.

Now, would you pay $93.85 in six months for that same name that closed at $117.05? The risk/reward appears to favor this option, at least for this urban cowboy.