What was that elusive word again... "Growth?" Perhaps we just fill in the blank. Try the word "Slowdown." Oh, I've got one... Let's try "Synchronized Negative Rates on Ten-Year Paper" on for size. You kids did notice those somewhat softer auctions for $27 billion worth of U.S. Treasury Notes and $19B worth of U.S. Treasury 30-year bonds that sandwiched a stronger-than-expected offering of 30-year Italian debt, right? No? I will bet then that you at least noticed that yields paid by U.S. two-year and five-year paper have "re-inverted." Oh, how nice.

Actually, as I walked across the New York Stock Exchange trading floor on Thursday afternoon, I thought that markets were holding up fairly well, given what should have been seen as a multi-pronged threat to equity prices. Stay with me here for a couple of seconds...

Monsters Under The Bed

First off, as we gaze at the ongoing fourth-quarter earnings season, as well as the outlook for the first quarter of 2019, we do not see the beauty of renewal that the Spring season promises. Instead, we see the slow death of corporate earnings growth. As far as Q4 goes, the good citizens of Gotham may not be fully cognizant, but the EPS beat rate, the average size of those EPS beats, and the revenue beat rate are all running below their five-year averages. Now toss in some severe erosion in Q1 expectations, and we have ourselves a ball game. A ball game where we'll come to bat every inning with two outs already on the scoreboard. Don't make any mistakes.

Really, there should not be any shock in the expectation of negative earnings growth surrounding the next quarter. Q1 2019 will be the first reporting season since Q4 2017 to not bear an overtly favorable comparison on effective tax rates. I have actually received questions on this. Yes, trade conditions and political conflict have pressured margins, on that there is no doubt, but negative earnings growth does not mean that corporations lose money, or necessarily that equity indices move lower. Let's dig in.

Early on Thursday morning, the European Commission greatly reduced their forecast for eurozone 2019 economic growth. Down went Frazier, but at least Smokin' Joe was a tough guy, a worthy champion as well as challenger who always fought the good fight. The eurozone? Not so much.

Between Brexit, and a slowing Chinese economy obviously struggling to overcome trade tensions with the U.S., European economies in general, and the German economy more specifically, face unexpected headwinds putting pressure on Factory Orders and Industrial Production in what is an export-based economy at its core.

Shortly after that, investors heard the Director of the National Economic Council, Larry Kudlow, use the word "sizable" in describing how far the distance was between the U.S. and China on trade negotiations. To add fuel to that fire, it appears that President Trump will prioritize the meeting with North Korea's Kim Jong Un in late February over meeting with China's President Xi ahead of their self-imposed March 2 deadline.

You and I both know that such headlines are simply posturing, because everything said and done by either side prior to actually signing documents is just that. Hope that a U.S./China deal will reignite global growth has been a driver for the financial markets in 2019, a parabolic move that began with a visit from Santa.

Still, markets are ruled in the modern day by keyword-reading algorithms, so we react. Back to my stroll across the trading floor. Given what markets have done in the recent past, the Volatility Index should have run wild -- and for equities, the selloff could have been much worse.

Robust job creation of 304,000, they said. That's the easy number, the nonfarm payroll print taken off of Table B, also known as the Establishment Survey. The Household Survey, which should be at least as valid, showed a loss of 251,000 jobs. This is the survey that provides us with the official Unemployment Rate, mind you, and illustrates a difference of 555,000 jobs in terms of creation/deterioration.

Clearly, this is evidence of the impact of the recent government shutdown, a threat that looms and could be reignited next week.

Down The Rabbit Hole

Domestic credit markets are telling us that no growth is expected from beyond two years out through year five, and that minimal growth is seen in years six through 10. If European investors are wiling to grab Italian 30-year paper at auction, then it is clear that they expect the ECB to feel forced to turn the money machine back on.

The Bank of Japan is cutting inflation expectations. The Bank of England just decided that they have to sit on their hands, and the People's Bank of China is already marching toward the rabbit hole, magic pipe in hand. That leaves us with the Fed, and what may be the greatest threat to the U.S. economy -- dollar valuations. St. Louis Fed President James Bullard, who does vote on policy this year, referred to the Fed's current policy stance as slightly restrictive Thursday night, while inferring that the Fed "should guard against the downside more."

The policy was known as ZIRP, or near-ZIRP (Zero-Interest Rate Policy), from the central bankers' point of view. Equity investors called it TINA (There Is No Alternative). The public must understand that there has been broad inappropriate benefit in response to perverse policy that, in turn, created a skewed perception of risk.

Reality is only real after the fact. Anyone who has survived an encounter with a "top of the food chain" animal knows they were lucky. The odds are not always forever in your favor. The rabbit hole beckons. Not big enough for all. Long live the debt-supported super cycle.

Oh, there is still plenty of ugly to go around. Revenue actually declined by -5.6% for the quarter, but beat expectations. Mattel crushed consensus view for EPS with a surprise profit. How? Gross margin of 46.6% versus 30.7% a year ago. Operating Income of $107 million versus $-251 million a year ago. Expenses are down huge. That required a reduction in the firm's head count. That's not good, but it may have kept the firm going.

Some brands continue to struggle. American Girl is down, but the brand in terms of size is dwarfed by Barbie. Fisher Price/Thomas & Friends had been the firm's largest segment, but has taken a severe hit in the wake of the Toys R Us closures. Cash levels are far lower from last year, but to the firm's credit, total debt has not increased, and something I always look for... the word goodwill is not used anywhere on the consolidated balance sheet. How refreshing is that? 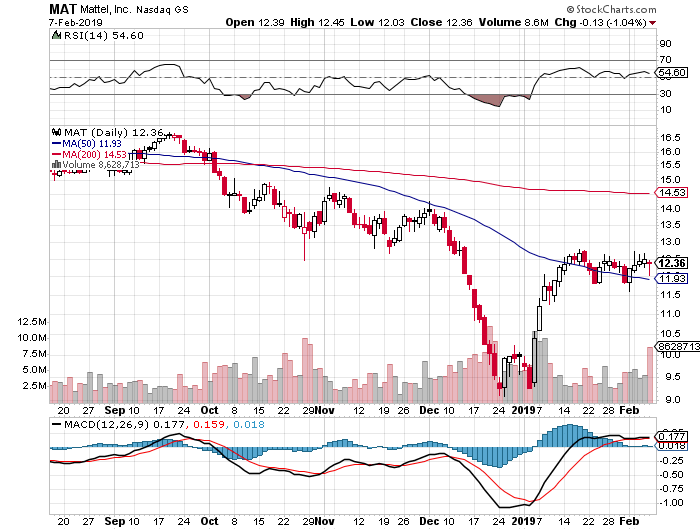 You see that red line? That's the 200-day simple moving average. My thought is that the shares will flirt with that spot on Friday morning. I don't want to buy the shares just below that $14.53 level. After a euphoric response for this stock in the early going, if the broader markets are selling off, that could drag on Mattel. Nothing wrong with doing nothing.

Obviously, I would rather buy these shares below $13. Not going to happen. My second choice would be to buy these shares on a breakout above $14.50, rather than near the top of a possible $13 to 14.50 range that could develop. Be agile.

An investor could go out six months, and perhaps buy a $15 call -- and at least partially subsidize the purchase by selling a $13 put with the same expiration. Just a thought that might save a few bucks up front. Happy hunting, gang.

Get an email alert each time I write an article for Real Money. Click the "+Follow" next to my byline to this article.
TAGS: Earnings | Economy | Investing | Politics | Put Call | Stocks | Technical Analysis | Trading | World | U.S. Equity