I wouldn't quite call it a rally. However, maybe it was rally enough. To stabilize equity markets for now.

Then something changed, something that forced a steepening of the Treasury yield curve. Was it the lightest print (166,000) for weekly Initial Jobless Claims since well before the cows came home that did the trick? Well, I don't know, but visible labor market strength is surely a net positive for the economy in a broad sense.

Was it all the Fed speak that is so readily available as Fed Chair Powell has released his minions in order to pound home for the investing public just what the central bank's intent really is? I think so.

I doubt it was the apparently accelerating reliance of the American public on the extension of revolving credit (+20.7%) relative to non-revolving credit (+8.4%) for the month of February (published by the Fed on Thursday night).

St. Louis Fed President James Bullard spoke early on Thursday. Bullard, over time, has become a Sarge fave. Not because we often agree. Bullard changes his mind too often for that. But it's because Bullard is honest (I think) and does change his mind depending upon circumstance, and he does so quite vocally at that. On Thursday, Bullard, who does vote on policy this year, said the Fed funds rate is about 300 basis points too low, according to the Taylor Rule. Bullard stated that he would like to get the FFR to something like 3% to 3.25% by year's end. That worked to pressure the long end of the Treasury spectrum of debt securities, while there was some support for the short end.

In addition, both Chicago Fed President Charles Evans and Atlanta Fed President Raphael Bostic expressed in public appearances their preference for getting the FFR to "neutral" sooner rather than later. Chicago next votes on policy in 2023, Atlanta in 2024.

By day's end on Thursday, the S&P 500 had put together an increase of 0.43% to close precisely at 4,500 and more importantly had taken back its 200-day simple moving average (SMA).

The Nasdaq Composite gained a measly 0.06% for the session. However, key here is the index benefitting from technical support at its 50 day SMA.

In both cases, the unfilled gap to the immediate north may need to be filled from an algorithmic perspective on Friday, before markets in general can continue on with where the flow of capital will ultimately take them.

Readers will want to make note of that Thursday candlestick for the Dow Transports. See how it looks like a sledgehammer (there I go again) standing upright? That's called a hammer doji, and what it is, is a one-day bullish reversal candlestick pattern. Plainly, coming after a number of red candles, that's a bullish signal. Signals like this can be wrong. That said, the probability of at least a higher opening on Friday morning for the transports was enough for me to add to both Union Pacific (UNP) and United Parcel Service (UPS) for an overnight trade.

Unfortunately, small-caps remained under pressure on Thursday as the Russell 2000 gave up 0.35% and the S&P 600 closed just short of "unchanged."

Readers will note that the iShares Russell 2000 ETF (IWM) comes very close to printing a similar hammer doji on Thursday, but a little less defined than what the Transports offered. Not that this is not a hammer. It may work. I just find it slightly less promising for an overnight trade than I do the transports.

Seven of the 11 S&P sector-select SPDR ETFs shaded green for the session, which was a welcome change. However, allocation still favored defensive sectors as Health Care (XLV) and Staples (XLP) finished in first and third places for the session. Growthy-type sectors did less well, with Technology (XLK) placing seventh and Communications Services (XLC) bringing up the rear.

Breadth was less than hot, but improved on Thursday. Losers beat winners by a narrow margin at the New York Stock Exchange and by a rough 7 to 5 at the Nasdaq. Advancing volume accounted for a 39.2% share of composite NYSE-listed trade and a 41.6% share of all trade for Nasdaq-listed shares. However, aggregate trading volume decreased notably on Thursday from Wednesday across the board. The aggregate decline was apparent for NYSE-listed, Nasdaq-listed, S&P 500 subordinate and Nasdaq Composite subordinate names, meaning that any price discovery expressed on Thursday could be somewhat less meaningful than it might have been on elevated volume. In other words, some of the prose sat on their hands.

I found it kind of humorous that early on Thursday morning news breaks that J.P. Morgan strategists led by Nikolaos Panigirtzoglou see commodity prices in general rising as much as 40% should investors boost their allocations to raw materials at a time of rising inflation. That seems kind of economics 101-ish.

I then had to laugh out loud (OK, to myself) when later that morning the House of Representatives voted overwhelmingly to strip Russia of its normal trade status with the US and in a separate bill ban imports of Russian gas, oil and coal. The legislation on trade places Russia (and Belarus) in the same penalty box as the North Koreas, Irans and Cubas of this world. The bill that would ban Russian fossil fuels would, if passed in the Senate, codify President Biden's executive order doing the same that was issued last month.

Then I laughed some more when that afternoon more headlines passed my screen. The European Union had agreed to ban coal imports from Russia in a (finally) first move targeting Russian energy-commodity-driven revenue. Included in this sanctions package would be a ban on Russian trucks and Russian ships from entering the EU. Member states have until Friday (this) morning to lodge formal objections.

Keeping an Eye on...

Bloomberg News and others are reporting that Chinese commodity firms are purchasing Russian coal and oil and paying for it in yuan. New shipments of Russian coal and oil are expected to land in China this month and next. At the same time, Moscow is said to be working on a rupee/ ruble payment system in order to smooth out similar trade with India.

Not that the US, UK and EU should be doing anything differently as far as sanctioning the Russian economy and excluding Russia from the SWIFT messaging system, but if the two most populous nations on earth are willing to purchase Russian energy commodities in local currency in order to land a discount, thus decreasing the value of the US dollar's place as the reserve currency to the planet, we must take notice. Disappointed in Chinese and Indian leadership as the Ukrainian people suffer. That said, the potential for a Russo-Sino-Indian non-dollar trade "agreement" cannot be ignored. Something negative and lasting is likely brewing here.

It should be noted that on Thursday, the UN's general assembly voted to suspend Russia from the Human Rights Council. Ninety-three UN member nations voted to approve Russia's suspension, while 24 nations including China voted against suspending Russia and another 58, including India, abstained.

Breakout? In This Market?

Anyone else take a peek at O'Reilly Automotive (ORLY) lately. I am not in the name, but I have been watching the chart. Just not sure what I am seeing. 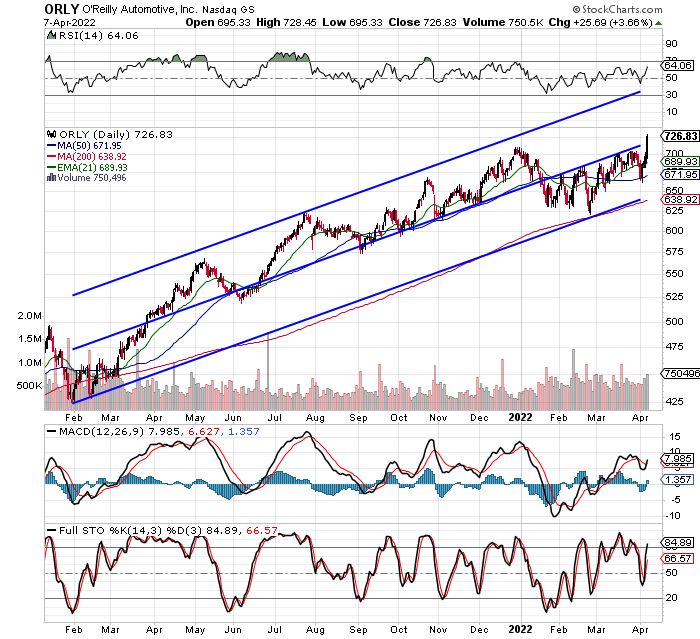 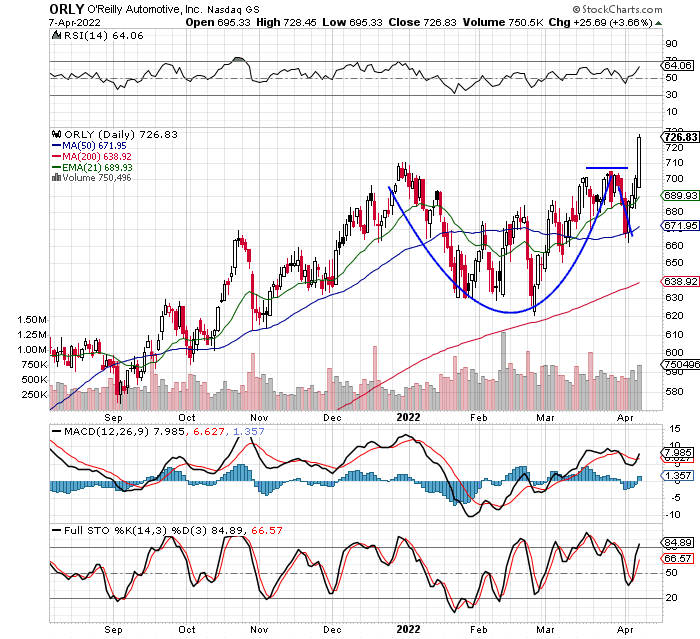 Do you see a breakout from a cup with handle pattern with a $705 pivot? 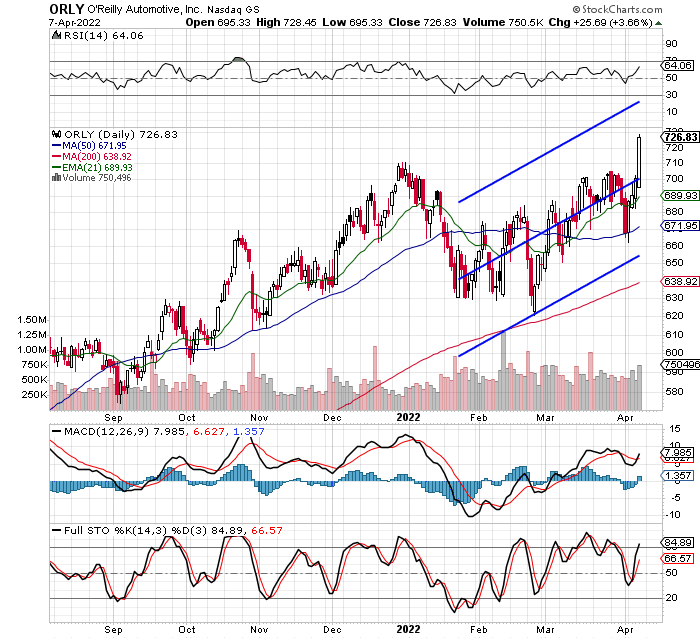 Or do you see a rising wedge pattern disconnected from the prior trend? That would be bearish. I really see both. The stock trades at 22x forward earnings but pays no dividend. While tempting, I don't see anything that I can be confident in that would provoke the extension of capital that I could feed my family with.