As shares jumped by 7% to close at $7.18 on Thursday, enticed investors should also be wary of the massive debt that the company carries on its back, one that the company's recent actions suggest could be a larger problem than many realize. 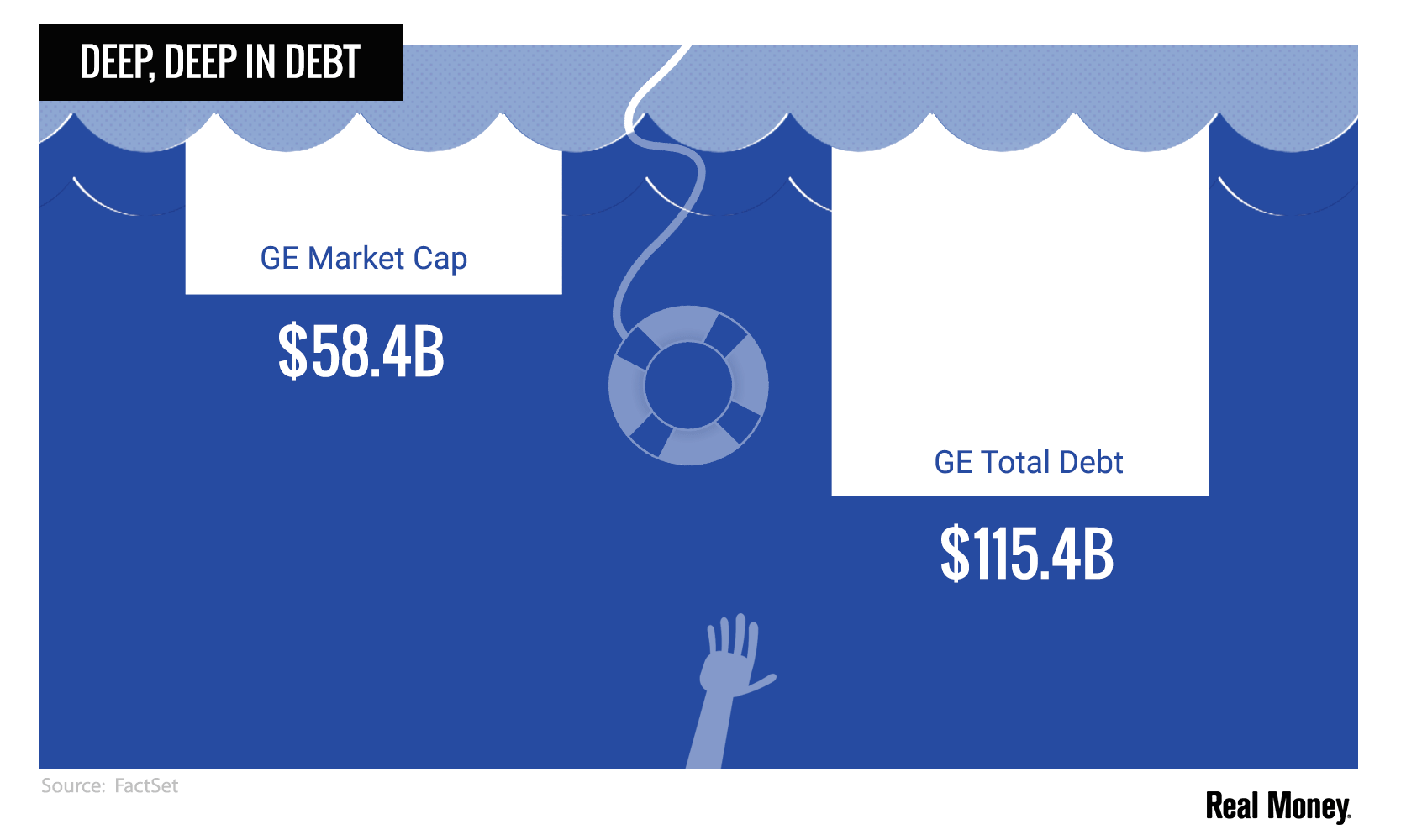 "We have detailed at length our take on the challenging financial situation in prior notes, namely [about] $100 billion in net liabilities," JPMorgan's Stephen Tusa said on Thursday morning. "In order to get to "normal", the [company will] need to reduce about $65 billion in a combined straight debt, soft liabilities, and pension. The underlying problem is weak free cash flow."

Gordon Haskett's John Inch took it a step further, noting that the company likely has serous liquidity issues that many have not registered.

"GE seems to be selling almost everything that isn't nailed down," he said. "Why are they taking these steps if they are not concerned about liquidity?"

He called the company's sale of ServiceMax on Thursday a "fire sale".

"If they had gotten a reasonable price for ServiceMax, they would have disclosed it," Inch said. "There's a reason they did not disclose it."

Inch, unlike the more amenable Tusa, has maintained his "Sell" rating amid the company's struggles, explaining that the company has a "woeful record of shareholder destruction" that he does not expect to abate anytime soon.

"The sale of ServiceMax, a previously perceived crown jewel asset within GE's digital line-up, marks another perhaps troubling data point supporting the notion that GE is scrambling to sell everything it can as quickly as it can to mitigate near term liquidity issues," he concluded. "While GE and bullish analysts continue to downplay the company's liquidity risks/challenges, we believe ongoing business "fire sales" possibly point to a different story."

To be sure, the company has acknowledged its gaudy debt, with Culp noting the large-scale belt tightening the company will need in order to right its ship.

Considering the company holds about the equivalent of the Campbell Soup Company's (CPB) enterprise value in long-term pension liabilities alone, even "large-scale" might be an understatement.

Still, Culp has remained optimistic in his nascent leadership of the much-maligned manufacturer.

"I think we've put the liquidity question to rest," Culp told CNBC's David Faber in an interview in November. "We need to bring the leverage down. I think we've got plenty of opportunity, through asset sales, to do that."

The company has certainly not been shy about pursuing this strategy, offloading a stake in oil entity Baker Hughes (BHGE) , Pivotal Software (PVTL) , and the aforementioned ServiceMax, just to mention the recent moves.

Certainly, Culp was not kidding about his use of asset sales to buoy the company.

Still, Gordon Haskett's Inch called the interview "extraordinary", expressing his suspicions of a TV interview shortly after a quarterly report and Culp's apparent openness to an equity raise, which would only serve to further damage shareholders.

"He said that they've put the liquidity issue to bed. I don't feel they have at all," he commented.

Inch added that an upcoming IPO of the healthcare business could stand to only further erode shareholder value.

In another move unpopular with shareholders, Culp has reined in the company's famous dividend payment, cutting it by over 90% to just $0.01.

The move is essentially a way of holding onto the dividend just to remain in a dividend category in order to placate fund requirements and maintain the company's historic dividend paying status.

While shareholders might not have been happy with the trimming of their payout, ratings agencies were happy to see that Culp is serious about debt reduction.

"The decision to eliminate substantially all of GE's $4.2 billion annual dividend signals GE's objective to prioritize financial flexibility and strengthening its balance sheet," Moody's said in a statement upon the dividend cut. "The enhanced free cash flows would allow GE to maintain a higher cash balance, reduce intra-quarter borrowing needs and better contend with contingent liabilities that could materialize. Over time, the enhanced free cash flows would help ease financial constraints under which GE's businesses may be operating and, in conjunction with additional asset sales, could enable GE to repay more debt than the $9 billion announced in June concurrent with the planned spin-off of GE Healthcare."

Such large scale payoffs will be key to mitigating risks amid a higher interest rate environment that stands to punish highly levered companies like GE.

While the company got a rare applause from Moody's on the action, the implications of the cut might be troubling and could be just a symptom of the larger debt problem that Culp is still trying to clean up.

Judging by the balance sheet, it won't be a quick job.

Get an email alert each time I write an article for Real Money. Click the "+Follow" next to my byline to this article.
TAGS: Investing | Stocks | Software & Services | Industrials | United States | Analyst Actions | Stock of the Day