By BOB LANG Sep 16, 2019 | 03:02 PM EDT
Markets have made their way back from a dismal August to put themselves near all-time highs. If it seems like a familiar tune, well it is.
Seeing the chart below, the S&P 500 was surging in July toward all-time highs, then a series of tweets hit along with some poorly received news from China, and the meltdown occurred. Are we going to face a similar fate, or will we dodge the danger? 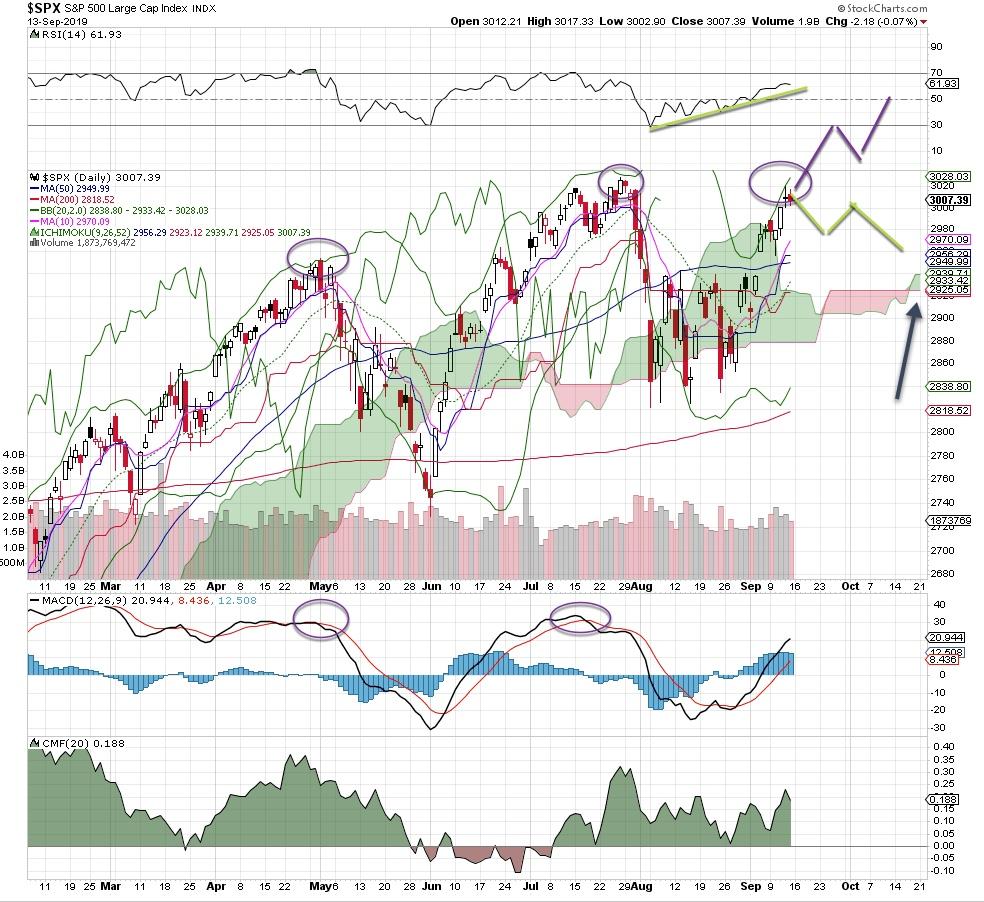 One thing we know is markets are reacting on news, tweets, promises and even some fake news. That makes for a tough trading environment at a time when fundamental data is coming in mixed. Manufacturing and industrials are struggling mightily. Banks have recently had a nice run, but there are challenges here with the economy on the lower end of forecasts. (Energy was languishing, but then there was news of attack on Saudi oil facilities, and we have to see how that plays out.)
The recent run for the markets was achieved mostly during the overnight sessions, with big gap moves up (and a few down) giving few a chance to get a leg up.  In about a month, the market indexes are higher by about 6% -- but is that it?  The indicators are certainly improved since the middle of August, but that was also the case in late July. RSI is steep and rising, while MACD is on a strong buy-signal and not overbought, the cloud has just twisted green. Volatility was low back then, as it is now overall, showing heavy complacency.
Speaking of complacency, take a look at the late April and early May period, too, a time when markets were at all-time highs, too. The Volatility Index was sporting a very low reading, around 12 or so (not much lower than the current reading), and a few sharp moves up in volatility and the markets were pounded -- down 9% or so in a month.
Use caution here, as the positive news flow may start to thin out.  We have a Fed meeting this week, where good news may already be baked into stock prices. A rough tweet, more news from the Middle East, or sour tone by the Chinese could mean another retreat from these highs.  Further, sentiment is quite bullish too, complacency is high. There is  nothing wrong with keeping on some protection, while it may sting at times it is the right thing to do.
Get an email alert each time I write an article for Real Money. Click the "+Follow" next to my byline to this article.
TAGS: Investing | Stocks