Friday's action cooled off sentiment, but not to a great extent. The Daily Sentiment Index (DSI) for the S&P 500, for example, backed off from 90 to 81, and Nasdaq's backed off from 92 to 87. But that's what I meant when I said a down-day would cool off the DSI, somewhat.

The American Association of Individual Investors (AAII) survey, however, did not see a marked increase in bulls, but they now number 33%. That is the highest reading we've seen in almost two months -- they numbered 42% in late April -- so there was a minor shift there in the more intermediate-term sentiment.

The Citigroup Panic/Euphoria Model, which has done an excellent job with sentiment these last few years, is finally lifting itself up and off the Panic level. It is now at neutral. Presumably it will eventually make its way toward Euphoria, but it depends on how the market unfolds in the weeks ahead. 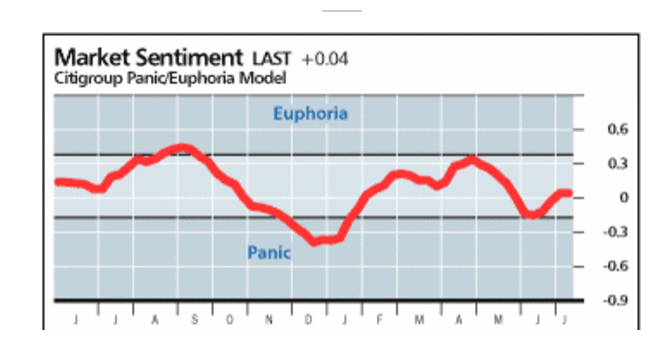 But let's talk about the upcoming overbought condition. The shorter-term Overbought/Oversold Oscillator should move up one more time early this week. This is simply based on the math behind the indicator. What I will focus on is if it does move up, will it make a higher high than that June peak a few weeks ago? Higher highs are bullish, where lower highs show a lessening of momentum. Either way, I expect it to be overbought late this week.

But it's the 30-day moving average of the advance/decline line that I have my eyes on now. I use this as my intermediate-term Overbought/Oversold Oscillator. You can see the oversold reading in late May (blue line). For a few weeks now, I have noted that I am pegging the mid-July time frame as the point we should get intermediate-term overbought. It is based on this indicator. I expect it to reach an overbought reading late this week/early next week. You can see it is far from perfect, but in general it does a decent job of telling us when momentum has stalled out.

Breadth has remained well-behaved, which means the McClellan Summation Index is still rising. Should that change, then it would be problematic for the market. Right now we have one minor divergence in that the stocks making new highs has not expanded. Sentiment is complacent in some areas, but not in others.

We'll keep our eyes on these indicators as we head into the latter part of the week to see if any further divergences crop up. The most interesting chart I see right now is that of the S&P 500, since this line has stopped our rallies for the last 18 or so months.