I see so many discussing the options trades in the mega-cap tech stocks and comparing it to August.

This felt different to me.

First of all, in August breadth had been poor for a while, which is not the case now. In August the McClellan Summation Index had been heading down since mid-to-late July; now it has only just turned upward. In August, the 30-day moving average of the advance/decline line was not coming off an oversold condition. In August the number of stocks making new highs did not spend the entire month rising as they have been the last two weeks.

Then there is the volume. In August, volume in the Invesco QQQs (QQQ) was relatively muted with fewer than 50 million shares trading each day. Monday, despite it being a bank holiday, the QQQs traded almost 80 million shares. I honestly don't know if that is bullish or bearish, since volume tends to rise sharply on down days, when it comes to the QQQs, but I know it's different than August. 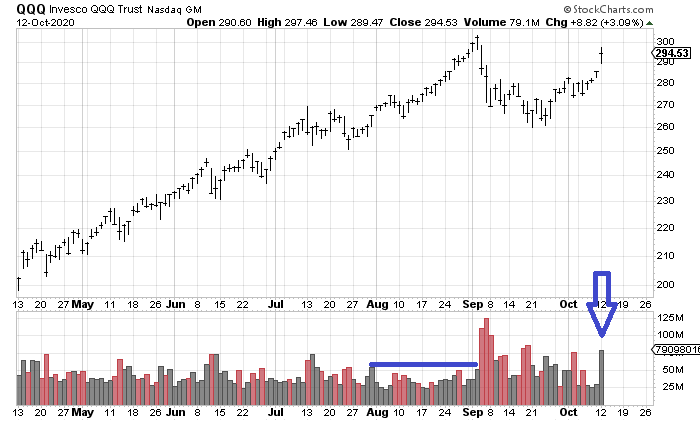 Another thing that's different is sentiment. In August, despite the poor internal readings of the market, folks were bullish-too bullish. The Investors Intelligence bulls were over 55%, which I find to be high, a yellow flag, but it's a reading over 60% that crosses the line to too bullish, which is bearish for stocks. We will see what this week's reading is on Wednesday, but as of now I expect it to be over 55%, but not quite yet 60%.

Then there are the bears. I don't have a line in the sand when it comes to the bears, as I do with the bulls. But last week's reading of just over 23% was high for me -- and therefore bullish for stocks. I expect that to decline when we get this week's reading. I do expect it to be lower and if it is under 20%, I would say it takes this indicator from the bullish camp and puts it back to neutral.

What we did see on Monday was the total put/call ratio fell sharply for the first time since the rally began. It was .66, which is the first reading under .70 since Sept. 15, when it was .69. Prior to that, the low reading was at the market high on Sept. 1. So yes, this could be an early warning sign that we're getting frothy.

For now though, I think that is part of the short-term overboughtness that should give us a pullback this week.

Get an email alert each time I write an article for Real Money. Click the "+Follow" next to my byline to this article.
TAGS: Activist investing | Investing | Stocks | Technical Analysis |