Folks outside the New York City area may or may not get this. Anyone try to get on the Brooklyn-Queens Expressway lately from the direction of Tillary Street in downtown Brooklyn? Oh, it's not just there, but almost anywhere across the five boroughs these days. The condition of the roads is enough to make one check one's own vehicle for damage every time one makes it safely back to one's own driveway. It has not been this bad since the mid-1970s.

The news cycle (is it still called a cycle when it's 24/7?) has not been kind since the twin closing bells chimed their last down at 11 Wall Street and up at Times Square on Tuesday evening. What went out as some optimism over next week's meetings between U.S. and Chinese trade negotiators as well as this Thursday's European Central Bank (ECB) policy meeting quickly became a market that is focused on the opening of a broad, new antitrust review of some of the nation's best-known tech companies with the backdrop of Robert Mueller's double testimonies in Washington, D.C., on Wednesday.

Blue-chip names seemed to run out in front, as Coca-Cola Co. (KO) , Dow Inc. (DOW) , Goldman Sachs Group Inc. (GS) and Caterpillar Inc. (CAT) all saw shares appreciate multiple percentage points. The fact is that the rally was rather broad-based as the spread between the yields for U.S. three-month Treasury bills and U.S. 10-year notes actually managed to un-invert for the afternoon on the hope that talks between U.S. and Chinese officials next week would drive economic growth. Don't worry, haters, doom and gloom are back in vogue and the primary spread that the Fed focuses on as a harbinger of recession has re-inverted overnight.

Trading volume was indeed heavier at the New York Stock Exchange on Tuesday from Monday, which was not the case up at the Nasdaq market site, suggesting that though index performance was rather even, there was some concentration among those blue chips.

Everyone who has spent extensive time in a wilderness environment knows that if you need to get off your feet, you kick whatever it is that you are going to sit on. A couple times. Bang it with a shovel, even. Never know what you cannot see. Sometimes spiders, bees, fire ants or even a snake will react to the threat. Better safe than sorry.

Tuesday afternoon, the U.S. Department of Justice announced the opening of a broad antitrust investigation into unidentified leading online technology platforms in order to find out how these platforms achieved a certain level of power, and to find if any have been involved in "practices that have reduced competition, stifle innovation, or otherwise harmed consumers."

How does that read? While this "new news" does not name specific firms, we already know from a prior agreement that the DOJ and the Federal Trade Commission (FTC) had divvied up responsibilities whereby the DOJ would focus on Apple Inc. (AAPL) and Alphabet Inc. (GOOGL) while the FTC would handle Facebook Inc. (FB) and Amazon.com Inc. (AMZN) . All four of those firms are lower overnight, with Apple being less so in percentage terms. (All four companies also are holdings of Jim Cramer's Action Alerts PLUS charitable trust.)

How much of a threat is this probe, really?

My thought is that regardless of whether investors think there is risk of a negative outcome here, there is certainly going to be exaggerated headline risk over time in the era of the keyword-seeking algorithm. While the firms themselves will be distracted as they focus on defending themselves, it seems likely that areas where the firms are competitive could draw more interest than others. Is that a problem? Is profit an issue? This could go on for quite a while. Indeed, without an actual goal other than understanding if there are problems, this inquiry is so open-ended that it will go on for a while. No maybes about that. Good chance that this caps valuation metrics for these names for the time being.

Of these names, I remain long Apple as I see it facing the least risk, and I see the positive potential that the rise of the firm's services ecosystem creates for forward-looking valuation. That said, I have kept recently to simply day-trading Amazon options, making sure to go home flat the name every single night. I also exited my Facebook long on Friday, telling the crew at Doug Kass' Diary that I was "completely out of FANG going into the weekend." Honestly it just smelt like some news was out there.

Do I see less risk in Apple because that's what I want to see? Of course I don't think so, but one never recognizes one's own bias in real time, so reader, be cognizant of my self-interest where this is concerned.

Threat to the Markets?

Former Special Counsel Robert Mueller testifies before both the House Judiciary and Intelligence committees on Wednesday morning. Is this appearance a threat to financial markets? Only if something new shows up that is convincing enough for one side or the other to admit defeat. Any of you see something like that in the offing? Me neither. That said, Mueller will answer questions. That does make the event less predictable.

Politicians, the public, and yes, financial markets have all had plenty of time to interpret and digest Attorney General William Barr's summary and Mueller's brief statement that his report of 400-plus pages was his testimony, and that he would not comment beyond it. This makes it unlikely that new information becomes available unless Mueller gets tripped up somehow. With that in mind, understand that both of the major political parties are in campaign mode, so there also will be an elevated level of aggression, and perhaps provocation.

If all stands as is, then no, this event is not probably a threat to the marketplace. That said, you know how you see markets move quickly and you don't know why? Well, you'll know that those darned keyword-reading algorithms have latched onto something. Remember, financially, we are neither Republicans nor Democrats (I really am neither). We are mercenaries, loyal only to what's best for our nation and for our families.

Outlook? High single-digit comp sales growth for the year, up from mid to high single-digit expectations. And did I mention the newly authorized, $100 million share repurchase program? Gee whiz.

Oh, something did print lower -- labor costs. This is called hitting on all cylinders, gang. The shares are trading overnight at roughly a 3% premium to where they closed on Tuesday afternoon. 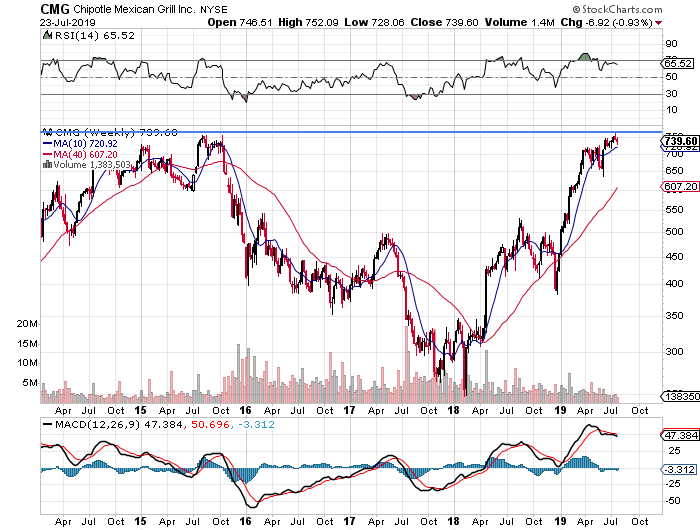 That's some "golden cross" experienced back in early April 2018, no? (This is a weekly chart, so that is a cross-over of the 10-week simple moving average above the 40-week SMA.) A trader who bet on that indication at that time, and never took a profit (I would have taken a profit in May 2018 and smiled.) would be up about 147% at the last sale I saw in overnight trading of $761-ish.

By the way, $761 puts CMG above the highs of four years ago, but below last Friday's high. My gut tells me to short a few of these shares here on Wednesday. I'll probably let the intra-day chart tell me whether to get involved. The food is delicious.

I love cloud-based, workflow auto-mater, data consolidator, business administrator ServiceNow Inc. (NOW) . I mean, this stock has been an absolute beast since breaking out of an autumn 2018 period of consolidation. Take a look. 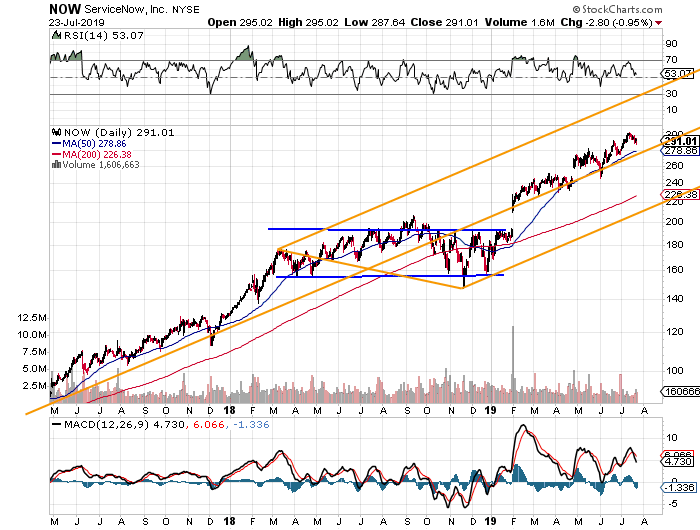 So, on a day where there is so much news flow and so many other, bigger names reporting earnings that will draw attention away from this firm that happens to be one of my best performers this year, I will be watching this one this evening with baited breath. I expect to see earnings growth and revenue growth of more than 30% year over year for this name. That's the problem. Through NOW's own outstanding performance, the bar is set so high, and the way the shares have behaved reflects that. Needham upped its price target for NOW on Tuesday from $276 to $320. Welcome to the club, Needham. We've had a $345 target for NOW for months now.

I fully expect some traders to take profits this evening regardless of outcome. That's only natural. Up or down, the Street is sitting on outsize performance here. I see myself adding at anything below $278. That's the 50-day SMA. Tonight, for me, it's all about subscription revenue and net new customers with annual contract value of $1 million plus. The number we're going off of there is 717, FYI.