Perhaps, I'm jaded, but does anyone else find it hilariously ironic that Huawei would accuse another company, an American one at that, of being dishonest?

A company that came from virtually nowhere to vault to the top of the tech scene. Accusations of patent espionage and other improprieties have dogged Huawei for years now. I'm a believer of the concept: where there's smoke, there's fire.

While I'd love to think the news is a non-factor, China tends to look out for its own. FedEx (FDX) has a huge international presence, so a boycott in China would be troublesome, likely to the tune of a 20% revenue haircut during the time of the boycott, and a lagging impact afterward.

From a technical standpoint, I'm focused on the $156 level on the weekly picture (see chart below). After trying to bounce, the shares broke down to start May. Unfortunately, this creates a bearish breakdown of a flag formed after the end of the year drop. 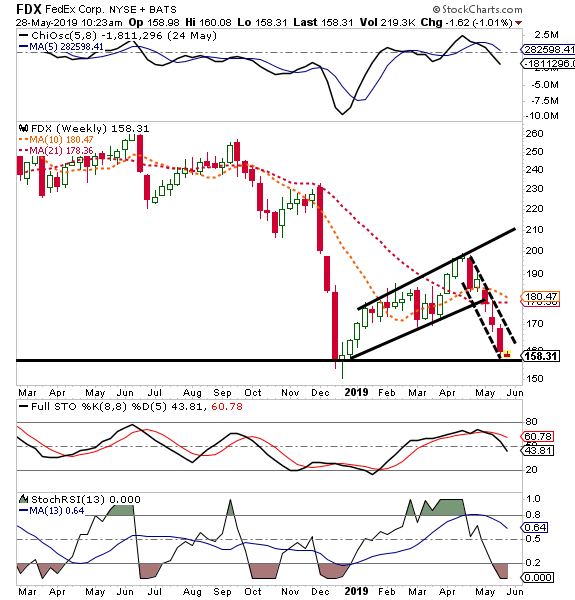 Secondary indicators aren't any help for the bulls either. The bearish crossover in the Full Stochastics indicator like the one that kicked off May have plagued bullish price action for more than a year. Each bearish crossover has led to lower lows and we're threatening that this week.

I have no insight as to whether FedEx diverted packages, but it's not a good look for them. They may be stuck in the court of having to prove themselves innocent, and even if they do, it may not matter to Chinese businesses.

The Trade War is showing it will have more casualties than simple tariffs or slight cuts in revenues. Expect more mud to fly against iconic companies in both countries.

The risk from a technical standpoint is clearly to the downside, so even without this news, I wouldn't be a buyer of FedEx shares.

With the added accusations from Huawei, true or not, I'd wait for clarity on FedEx or lower prices before becoming a buyer.

Get an email alert each time I write an article for Real Money. Click the "+Follow" next to my byline to this article.
TAGS: Investing | Stocks | Technical Analysis | Trading | Stock of the Day

If you were a recent buyer of the stock this could be a painful correction.