When a stock is able to rally on bad news, that's typically a sign that the bottom is near, Jim Cramer reminded viewers of his "Mad Money" program Thursday. Jim highlighted FedEx Corp. (FDX) , which now trades at just 11x earnings, as an example of such a stock.

The transportation stocks are off 11% from their highs earlier this year as signs of a global trade-induced slowdown began to materialize. Shares of FedEx are off 29% over the past year. The stock had a brutal May as trade talks broke down and tariffs escalated, but since then things seem to have stabilized.

When FedEx reported results two weeks ago, the company admitted that the global environment remains challenging and 2019 will be another year of change and transition for many companies around the globe. But since those remarks, shares have rallied from $156 to $162, Cramer noted, and that's a sign of strength. Shares of FedEx historically have traded for 16.4x earnings, Cramer said, which makes their current level of 11x earnings even more attractive as all the bad news is already baked into the stock without the offset of the positives.

Let's visit with the charts and indicators.

In this daily bar chart of FDX, below, we can see that there has been some buying interest in the stock in the $160-$150 area in December and June. Prices are below the declining 50-day moving average line as well as the bearish 200-day moving average line. The daily On-Balance-Volume (OBV) line has tracked the price movement, but it has been a bit muted this year in the upswings and declines. The trend-following Moving Average Convergence Divergence (MACD) oscillator is below the zero line in bearish territory with the two moving averages that make up the indicator on top of each other. A bullish or bearish signal could come soon.

In this weekly bar chart of FDX, below, we can see that prices are back where they were three years ago. The 40-week moving average line is above the market and pointed down. The weekly OBV line peaked a year ago and the MACD oscillator is bearish.

In this Point and Figure chart of FDX, below, there is a downside price target of around $139 projected. 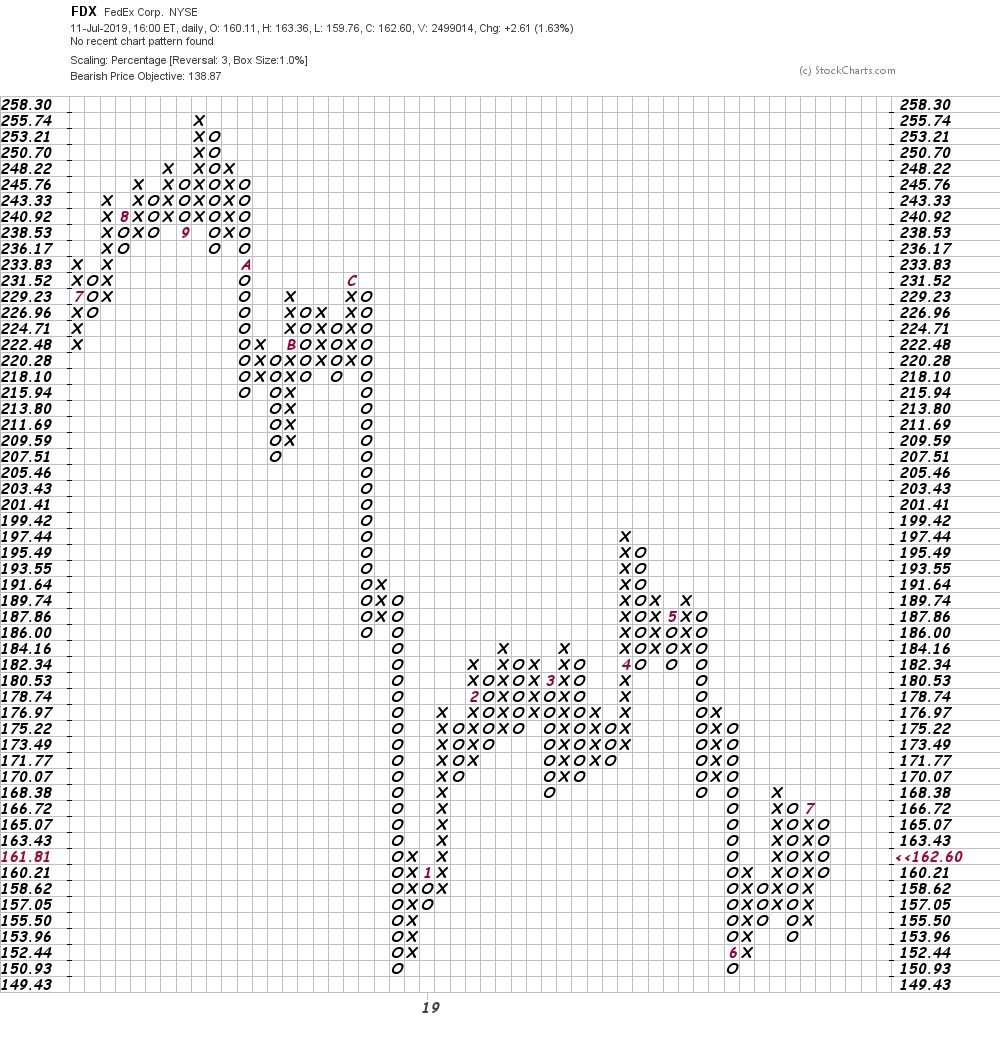 Bottom line strategy: Cramer has noticed that FDX did not go down on bearish news. That is a good start toward making a bottom on the charts, but we are never 100% sure what traders and investors are focusing on three or six months out. A couple closes above $170 and strength from the OBV line will be another short-term positive sign.

Get an email alert each time I write an article for Real Money. Click the "+Follow" next to my byline to this article.
TAGS: Investing | Stocks | Technical Analysis | Transportation | Mad Money | Real Money