We last looked at FRT way back on Aug. 12 and gave this assessment: "We don't know how this pandemic will ultimately play out and whether malls will survive or thrive in the months and years ahead. Meanwhile, the sense I get from these three charts is that FRT will need more base building AND signs that aggressive buying of the stock has returned. Until that is evident, I would look for other opportunities."

I think FRT's charts have improved so another visit is in order.

In the updated daily bar chart of FRT, below, we can see that the shares have been stuck in a large sideways trading range bounded by $65 on the low end and $100-$105 on the upper end. Prices show some new strength in November when they spiked up into the $90s for a while. FRT declined to retest the rising 200-day moving average line in early January and is now trading above the more sensitive but rising 50-day moving average line.

The trading volume looks like it has been more active since November but the On-Balance-Volume (OBV) line shows a downtrend into late January. Hopefully the OBV can start to improve from here. The Moving Average Convergence Divergence (MACD) oscillator has just edged up to a buy signal.

In the weekly Japanese candlestick chart of FRT, below, we can see a mixed picture. The price action shows a large potential double bottom but strength above $105 is needed to complete the pattern. FRT is trading above the rising 40-week moving average line.
The weekly OBV line did not bottom until June and its subsequent rise has been uneven. The MACD oscillator has finally edged above the zero line for a buy signal.

In this daily Point and Figure chart of FRT, below, we can see a new high and breakout. A $123 price target is now indicated. 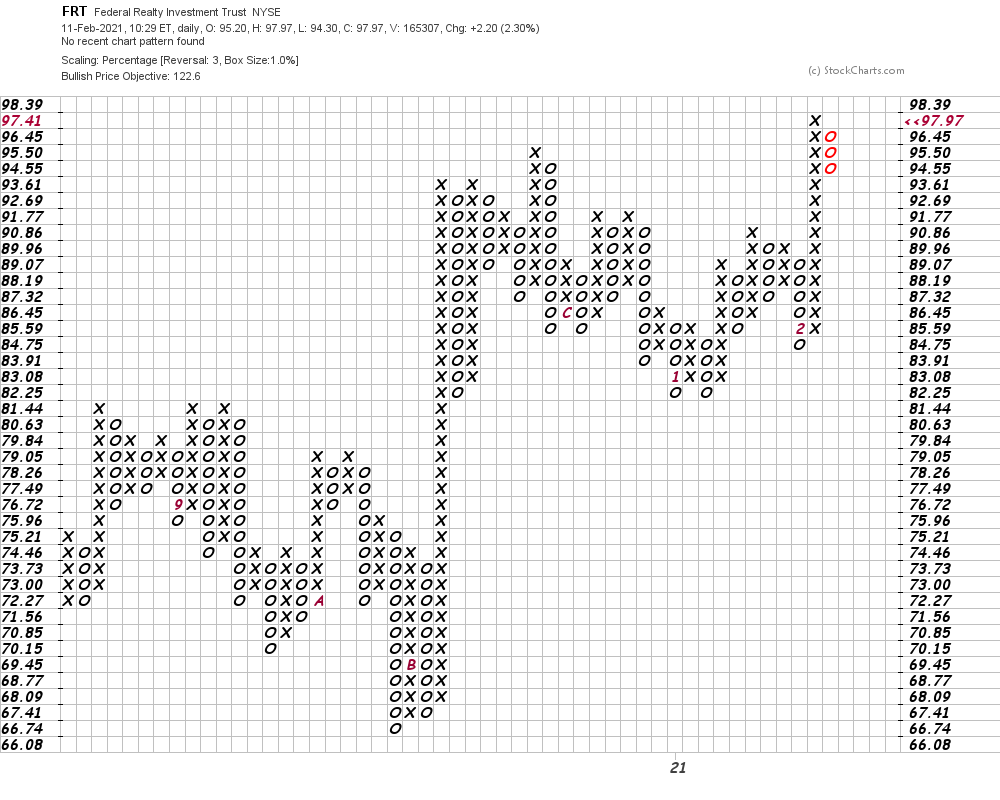 Bottom-line strategy: The charts of FRT have improved since August. Traders could go long FRT at current levels risking down to $83 for now. The $120-$125 area is our price target.
Get an email alert each time I write an article for Real Money. Click the "+Follow" next to my byline to this article.
TAGS: Investing | REITs | Stocks | Technical Analysis | Retail | Mad Money

The Markets Are Steadily Climbing

I'm hoping that we see some more rotational action rather than a broad market correction.

JP Morgan Had Another Outstanding Quarter, Here Is How I'm Playing It

Should you take profits or buy here? This is my thinking on the stellar banking name.

Prices are rising, but the data is messy, especially right now. Here is how I'm thinking about it, and when the Fed might hike rates as a result.