For his second "Executive Decision" segment of Mad Money Tuesday night, Jim Cramer spoke with Don Wood, president and CEO of Federal Realty Investment Trust (FRT) , the shopping center REIT that missed on earnings with only 76% rent collection. Shares of Federal Realty currently yield 5.1% after the company raised its payout by a penny.

Wood said what's most important right now for Federal Realty shareholders is their dividend. He said Federal Realty was built to endure tough times like these. Wood explained that America was over-retailed to begin with and the weakest players are indeed struggling. But, he said, that creates opportunities for stronger players to move into quality, A-list shopping centers.

Not everyone will be a winner, Wood admitted, but Federal Realty is already looking toward 2021 and beyond, and the company sees opportunities that don't exist for enclosed mall operators.

Let's see if the charts are looking ahead.

In this daily bar chart of FRT, below, we can see that prices started a downtrend back in November and fell hard into March. The March low was retested several times in April and May before a tradeable rally took hold into early June. Prices faded again and slipped lower into late July. Discouraging for trend followers. FRT is currently testing the underside of the declining 50-day moving average line and is well below the declining 200-day moving average line.

The On-Balance-Volume (OBV) line has been in a downtrend for the past twelve months and even made a new low in August. Traders and investors have been more aggressive sellers for months now. The Moving Average Convergence Divergence (MACD) oscillator turned back to a sell signal in July and only flashed a cover-shorts buy signal this month.

In this weekly bar chart of FRT, below, we do not see a constructive-looking picture. Prices made a long sideways move from 2017 to late 2019 and then began a rapid downtrend, which probably "trapped" many investors with "underwater" positions. The $115 to $140 area now represents major overhead resistance in my opinion. Prices are below the declining 40-week moving average line. The weekly OBV line shows aggressive selling into July. The MACD oscillator has struggled after a cover-shorts buy signal in May.

In this daily Point and Figure chart of FRT, below, we can see two clues -- there is a potential upside price target of $100 but we can also see that there is a lot of potential overhead chart resistance. 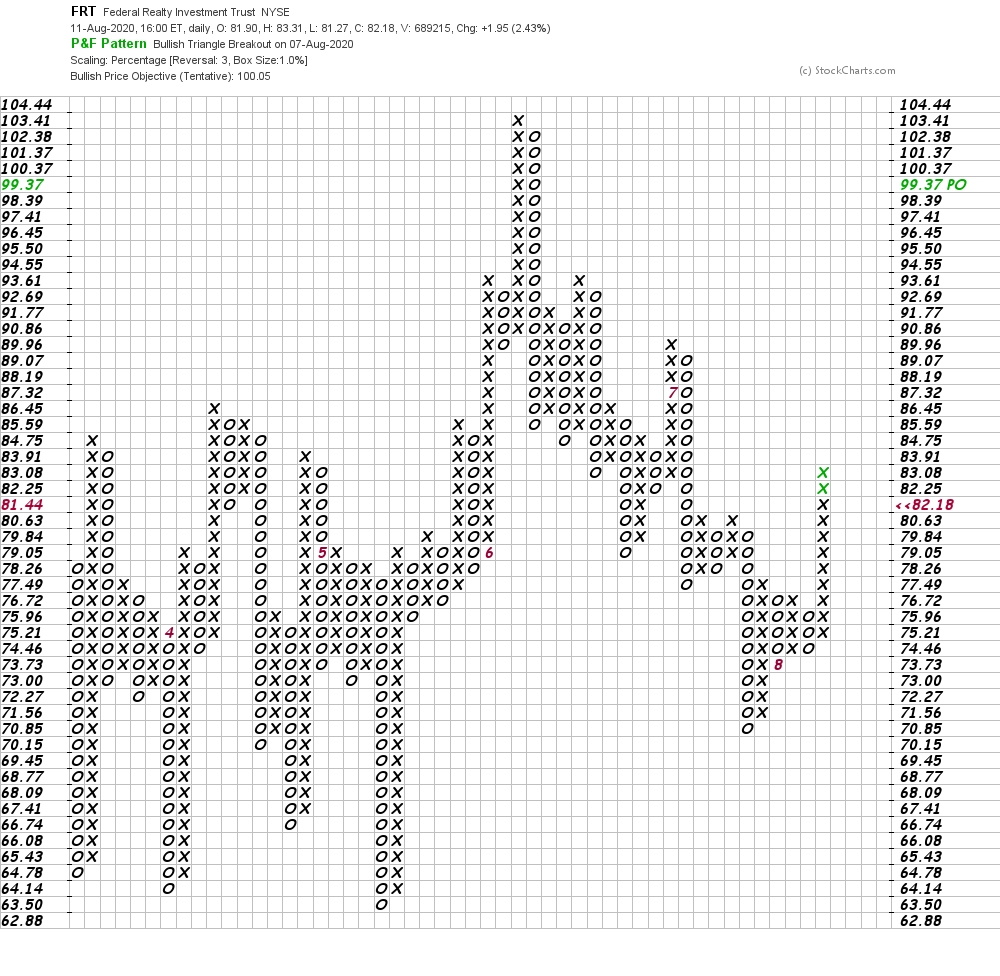 Bottom line strategy: We don't know how this pandemic will ultimately play out and whether malls will survive or thrive in the months and years ahead. Meanwhile, the sense I get from these three charts is that FRT will need more base building AND signs that aggressive buying of the stock has returned. Until that is evident, I would look for other opportunities.

Get an email alert each time I write an article for Real Money. Click the "+Follow" next to my byline to this article.
TAGS: Investing | Technical Analysis | Retail | Mad Money | Executive Interview | Stocks