Let's start with the 30-day moving average of the advance/decline line, what I use as an intermediate term Overbought/Oversold Oscillator. Two weeks ago it was hovering at the zero line. You can see that now it is closing in on the twin lows of June and July. By my estimation, it will be fully oversold sometime next week, the final week of the quarter.

The Volume Indicator, heading into September was at 52%. Today it stands just below 49%. While that may not sound like a big move you can see on the chart that overbought is the mid 50s and oversold is the low to mid 40s. That means it too is heading toward an oversold condition whereas two weeks ago it was just coming off the overbought reading.

The McClellan Summation Index is still heading down - it never turned up in the rally that first week of September. However it required a net differential of +5,300 advancers minus decliners on the New York Stock Exchange to halt the slide as we entered the final month of the quarter (that's what made us short term oversold). That metric now stands at +2,900. That is still a high number but if you think of it like going up a hill, in early September you were starting at the bottom of the hill and now you're half-way up the hill. The trend is still down but it will take less to stop the trend.

The Hi-Lo Indicator is in the mid-teens. This gets oversold under 0.20. Can it get lower? Sure, all these indicators can get more oversold; in fact they should but I like to prepare and anticipate what might come next. Recall, I spent the early part of August harping away about a bout of volatility coming. It did not arrive until later in the month, but stocks had started to act poorly weeks earlier. Recall that despite a 5% rally in Nasdaq, the number of stocks making new highs couldn't expand, having peaked at just over 100 in late July. 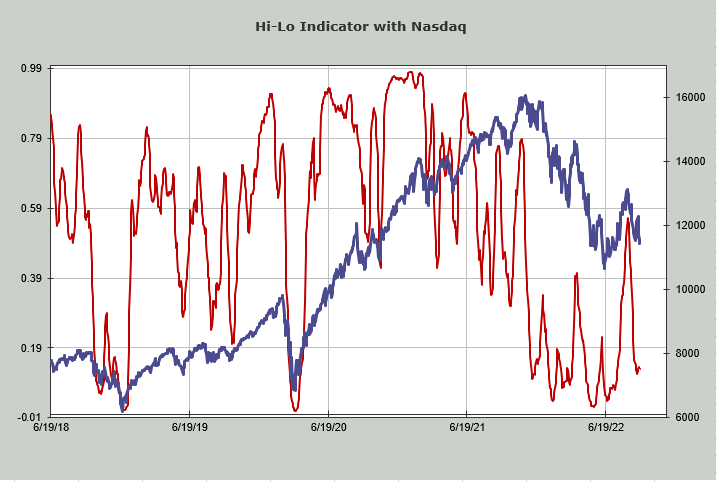 Sentiment is plenty bearish which you don't need me to tell you. However, I will report that the Daily Sentiment Index (DSI) for Nasdaq now stands at 10. The S&P stands at 11. These are the sorts of readings we saw for the CBOE Volatility Index in early August. Any further decline in stocks will surely take these to single digits which makes them extreme.

In addition to the low readings for the stock indexes, bonds stand at 14, having gotten to 12 twice last week. And don't forget the U.S. Dollar Index was 93 two weeks ago. Many of the cross currencies were at single digits.

We have the Federal Open Market Committee meeting this coming week, which will clearly be what moves the markets. If you take a step back and look at a weekly chart of the S&P 500 from June, notice that it took a few weeks of 100 point moves up and down before the market found its footing, enough to enjoy a rally. Jumping on the bear train now feels late. I suspect by early October the bears will be moseying over to the bulls' fence.