I have always enjoyed the batting cage.

Don't get me wrong, I have not played organized baseball in many decades, yet I still go to my local batting cages, fairly often. I just have always felt that if I do not train to hit a round ball with a round bat at elevated speeds that somehow, my reflexes will slow, age will set in, and a downward spiral, that might appear to be some kind of "domino effect," would kick off.

So, it is that I start off in the 60 mile per hour cage, and finish up in the 90 mph cage, allowing myself to move up through the 70 and 80 mph cages only after satisfying my ego that my bat control is there, and that I can place the ball where I intend.

There are two factors that usually affect my performance. One, my wife is usually there, perhaps bored but pretending to watch. Everyone who has ever played a sport knows how much better they play when someone has showed up just to watch them. Whether it's a parent making the effort, a girlfriend wearing one's road jersey in the stands, or eventually a spouse that simply understands the ridiculousness of one's stubborn refusal to ever surrender, the friendly pressure of knowing someone came to see you is always a positive.

Second, it's that darned 90 mph cage. I know that I have not been able to place the ball where I intend when in that cage now for a number of years. That's pressure. To at least hit fair balls in that cage. To look, in front of the bride, like I've still got it, when I know I'm just lucky to still make contact.

What matters now? With broad market equity indices close enough to records to be able to see the apex from here. Even if volumes and risk taking have clearly tailed off over a couple of weeks' time.

With an FOMC policy meeting scheduled to kick off on Tuesday and culminate on Wednesday of this week, that decision, or rather a potential change in language in the official statement intertwined with any inference made in the press conference, will impact our marketplace.

I think that the domestic macro-economic data released last Friday is quite important here. It is very hard to downplay the potential impact of not only headline Retail Sales and Industrial Production for May, but the sharp upward revision to April, at least for personal consumption. Somehow, what started out as an anemic performance for April has morphed into a consistently strong spring season.

A question that must be asked there is, "If the Census Bureau can be so wildly inaccurate in a month's initial release for Retail Sales then we really cannot trust the numbers for May, can we?" Honestly, should markets ever react to preliminary data? Ever?

Interestingly, the robust revision to April retail sales topped by a May print that some in the media who do not understand how these things work actually referred to as a miss, forced the Atlanta Fed to sharply increase the GDPNow model's contribution for Real Personal Consumption Expenditures to 3.9% from 3.2%. This moved the model's Q2 snapshot for GDP all the way from a paltry 1.4% to a much healthier looking 2.1%.

This Tuesday, ahead of the FOMC policy decision, the Atlanta Fed will have to tweak estimated growth in response to May Housing Starts, and then not again for a while.

Fork in the Road

This is what I think. Markets have generally moved sideways on light volume for a week. The FOMC will have to choose between data dependency, which is always based on historical, and as we see ... potentially incomplete information, or attempt to be proactive and head off trouble before it gets here, which would surely be based upon even more incomplete information. My thesis all along has been that an attempt to normalize the yield curve must be made, therefore I would choose to be proactive.

The fact is, though, and it is understandable that as the economy appears to be "less weak" than previously thought, this could slow down any action taken by the central bank to ease policy. As long as foreign economies remain soft, putting foreign central banks in a more dovish position, there will, in my opinion, be increasing foreign demand for the long end of the U.S. curve. This creates a necessity to reduce the overnight fed funds rate, currently inverted against everything on the curve until it hits the 30-year bond. Please understand that. It not just the 2-year note nor the 3-month T-bill that we hear so much about, it's the 30 day T-bill as well, and even the Fed's own overnight rate.

Failing to respond would be akin to sticking one's head in the sand, and hoping for the best. That is no strategy. I can forgive taking action for a good reason. Failing to act to something completely unnatural that should be a clear warning to any sentient being... not so much.

The Fed could if unsure about where to lean at this point, pull a full stop to its own "quantitative tightening" program ahead of the intended halt in September, in understanding that the modern regulatory environment requires much higher levels of reserves than at first understood. Somehow, the Fed missed this necessary balance at the commencement of that program even though more than enough of us had warned them to this destabilizing danger at the time.

One thing that I do think the Fed understands is the threat to economic growth caused by ongoing and potentially escalating trade wars. The recently better-than-expected macro has not been all that impacted by the trade war(s) that the U.S. is currently engaged in. That is partially due to the dramatic uptick in inventory building seen across the broad economy in the first quarter that served to boost first-quarter GDP that presented in some way as a matador's red cape.

How much will a slowing Chinese economy and widespread social unrest in parts of the country serve to bring China back to the table? How much progress can be expected at the G20 meeting later this month if presidents Trump and Xi even meet? We have already been told not to expect too much by U.S. Secretary of Commerce Wilbur Ross.

My thought on this is while a limited trade deal that eases tensions between the U.S. and China might be the best we can hope for, it also may be too much to ask for, as this is about a lot more than trade. This is about strategic influence and has to be looked at through the lens of a national security issue.

That said, from a market perspective, a slowing of further expansion of the current schedule of U.S. tariffs aimed at Chinese exports to the country might be a realistic best outcome, and corporations that have been slow to adjust supply lines and production will now be forced to price in that impact in terms of margin and projected profitability. It may be more difficult for those reliant upon Chinese purchasers to adjust to changes in trade law. On that front, several U.S. chip manufacturers, such as Qualcomm (QCOM) , and Intel (INTC) are seeking an easing of the U.S. Huawei ban.

The attack upon two tanker ships in the Gulf of Oman last week could be a lit match. The world around that match might possibly be illustrated as a room full of gunpowder. As the international community has blamed these attacks on Iran, and Iran denies responsibility, what are the implications?

I think that while the U.S. and American allies must always remain properly prepared for outright confrontation, as I stated last week on Fox Business, the first line of defense will likely have to be cybersecurity, as in the event of conflict there could be an attempt to destabilize not just commerce in the broader region, but local economies where the U.S. has an interest.

My gut is that this story does not go away quietly, making oil futures pricing even more volatile that it has been in the short to medium term.

First up, on Monday, United Technologies (UTX) CEO Gregory Hayes briefs the public on the firm's proposed "merger of equals" with military electronics giant Raytheon (RTN) . Both stocks have reacted poorly to this complex, highly contested marriage, but there is undeniable value on both ends of the deal and there is a strong likelihood for a market reaction to this presentation.

Second, the never-ending rivalry between Boeing (BA) and Airbus (EADSY) will take center stage at the show that runs all week. Boeing CEO Dennis Muilenburg addressed the media on Sunday from Paris. While Muilenburg admitted that in terms of communicating with the public, that Boeing "could have and should have done better," he also indicated that the firm had increased its forecast for aggregate sales across the commercial, defense, and space markets over ten years to $8.7 trillion from $8.1 trillion, despite that fact that Boeing landed just 32 orders for its troubled 737-MAX aircraft in the first quarter.

The question for markets becomes: Is this the year that Airbus makes significant progress against Boeing? There is plenty of talk of an Airbus update to its already in production A321 jet, which would accommodate the longer range market, and beyond that a potential hybrid electric engine. 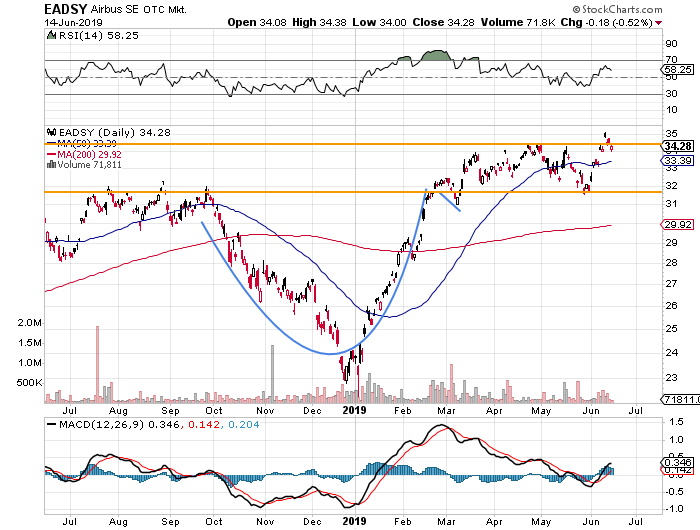 The name does show signs of life. Having now based for four months coming out of that giant cup with handle present on so many charts for the October through February time frame, the stock clearly tried to break out early last week, and failed.

The facts are this: These shares are not heavily traded here in the U.S., and trade over the counter. Do not be surprised if Airbus can produce something perceived as good news in Paris. Long term, I don't know. Airbus experienced better, but decelerating sales growth in the last quarter of 2018, over the year prior.

Technically, if Airbus can take and hold the pivot around the $34.50 area, I think a run at $40 or $41 is possible, at least until Boeing has their legs back under them.

This is a trade idea, Not so sure if it's an investment idea.

Note: There are no significant quarterly earnings reports scheduled for release today.

Get an email alert each time I write an article for Real Money. Click the "+Follow" next to my byline to this article.
TAGS: Economic Data | Economy | Federal Reserve | Interest Rates | Investing | Markets | Stocks | Treasury Bonds | U.S. Equity