The message was quite direct. Participants in financial markets were told that while they had expected a hawkish Fed, those expectations were probably not quite hawkish enough. The deal is this: The Federal Open Market Committee increased its target for the fed funds rate by 75 basis points on Wednesday afternoon. This brings that target range up to 3% to 3.25% from 2.25% to 2.5%.

The official statement experienced few alterations from previous statements. Previous mentions of Russia's invasion of Ukraine were now termed Russia's war. Mentions of Covid lockdowns in China have been omitted. Otherwise, the statement is an exercise in cutting and pasting. The messaging was in the Fed's quarterly (and nearly always incorrect) economic projections.

The reason these expectations are important is that they allow the public to peer into the FOMC's "group think" (group stink) concerning future implementation of policy in real time, and not because the Fed at its median or central tendency is any better at predicting economic reality than any high school senior with a passing interest in economics. For the Fed most certainly is not.

Readers were quickly drawn to the projected fed funds rate, which the FOMC sees at its median expectation at 4.4% by year's end. That's right. I just told you that the FFR stands at 3% to 3.25%, which was up 75 basis points from Wednesday and up 150 basis points from late July. This means quite bluntly that those who vote on policy expect to increase the FFR by another 125 basis points over their scheduled Nov. 2 and Dec. 14 meetings. Changes in policy are thought to take at least nine months and as much as 18 to be felt on Main Street, USA.

Market participants had been expecting/hoping that the Fed would consider "watching" what its recent decisions had wrought prior to moving ahead aggressively. Market participants have also been looking for Fed members to perhaps cool their jets in 2023 once these policy shifts do impact mainstream economic activity. The Fed's median projection for a fed funds rate of 4.6% in 2023 suggests no easing of policy at all next year.

The takeaway here is that this Fed is more than willing and even trying to damage the US economy in order to better balance its dual mandate. You might say that this is their job, and you would be correct. Whether or not economic growth and health is part of the Fed's mission is debatable. The central bank's dual mandate only deals with achieving and sustaining maximum employment and price stability.

When looked at in that way, the FOMC understands that labor markets have been strong while prices have destabilized. Simply put, the Fed is willing to rob Peter in order to pay Paul. The Fed is not concerned, not even for a second, with what lies outside of that mandate. This would include overall US economic growth, financial market performance and dollar strength. Not their concern. Not their focus. The heck with everyone else.

There are two types of full or maximum employment. One kind is the kind that both simpletons and the FOMC understand best. That would be full employment of the civilian labor force. The other, more nuanced understanding would be the full employment of the economy. This would deal with the measure of economic performance versus economic potential. This would deal with a whole menu of economic measurements such as utilization, output, production and efficiency.

Too deep for the FOMC? Maybe. Would require a lot more finesse than simply taking a sledgehammer to the economy in order to destroy demand so that consumer prices go not into disinflation but perhaps even deflation? An Economics 101 student could do that. The FOMC gets an "F" for execution. An "A" for effort? Uhm, no.

Tell Us What You Really Mean

"No one knows whether this process will lead to a recession or if so, how significant that recession would be. The chances of a soft landing are likely to diminish to the extent that policy needs to be more restrictive, or restrictive for longer. Nonetheless, we're committed to getting inflation back down to 2%."

Translation: The FOMC intends to keep tightening policy (don't forget, the reduction of the monetary base is separate and ongoing) into a recession, quite possibly a recession much worse than mild. This is not going to be an accident, gang... This is the plan.

Global central banks are waking up to the idea that they need to defend their currencies in the face of relentless US dollar strength. First, the Swiss National Bank raised its benchmark interest rate by 75 basis points to 0.5%. The SNB had increased this rate by 25 basis points in June, which was its first rate hike in 15 years. Perhaps even more importantly, the Bank of Japan directly intervened in foreign exchange markets this morning in an effort to prop up the yen for the first time since the late 1990s as the yen had dropped to roughly145.8 to the US dollar. That was a 24-year low. The BOJ took the yen up to about 142 per.

Financial markets took a pounding on Wednesday and it all happened late in the session. Stocks had hung fairly tough throughout the session and even rallied into the green early during Chairman Powell's address. Then things got ugly. Real stinking ugly.

Profoundly distressing action was seen around the US Two-Year Note. I see this product paying a rough 4.11% this morning. The US 10-Year, as I write, yields about 3.53%. This is a yield spread of -58 basis points. That spread went out at -39 basis points on Tuesday and was trading at -50 basis points late Wednesday. Treasury markets themselves are now pricing in something worse than a mild recession.

The S&P 500 ended Wednesday's regular session down 1.71%, as the Nasdaq Composite fell 1.79%. The KBW Bank Index took a pasting of 2.12%. Yes, banks can do well in a rising rate environment. Banks also face a lot of risk during recessions, and I don't think we have ever had a recession before where the Fed chairman told you that a "soft landing" will be tough to achieve and then adds that he's going to keep doing what he's doing.

For those who have asked about my Bank of America (BAC) Real Money trade from Wednesday: I went to the well twice on that trade, adding a first tranche at $33.75 and another at $33.68. I sold the first tranche at $34.25, which was the plan at the outset. I am still wearing the second tranche with BAC trading at $33.29 overnight.

On Wednesday, losers beat winners at both the New York Stock Exchange and Nasdaq Market Site by a rough 5 to 2. Advancing volume took a 13.8% share of composite NYSE trade and a 25.2% share of composite Nasdaq-listed trade. Trading volume in aggregate was up small for NYSE listings and up significantly for stocks that call the Nasdaq home. In short, the pros were moving into cash on Wednesday afternoon. 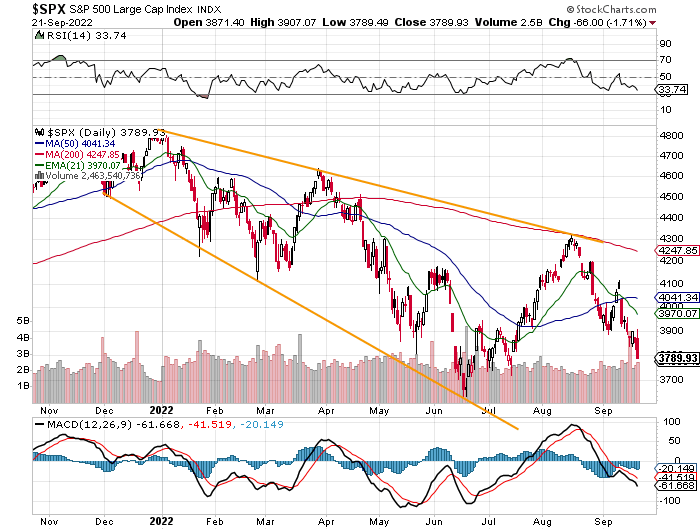 Readers will see that the S&P 500 made a new recent low on Wednesday and remains weak as its 200-day simple moving average (SMA) continues to sag. The 50-day SMA, which had started trending higher in July, is now at a point where if that line is not retaken it will add to the technical woes of this index. Relative Strength is weak, but not yet oversold. The daily moving average convergence divergence (MACD) is in awful shape. Let's zoom in... 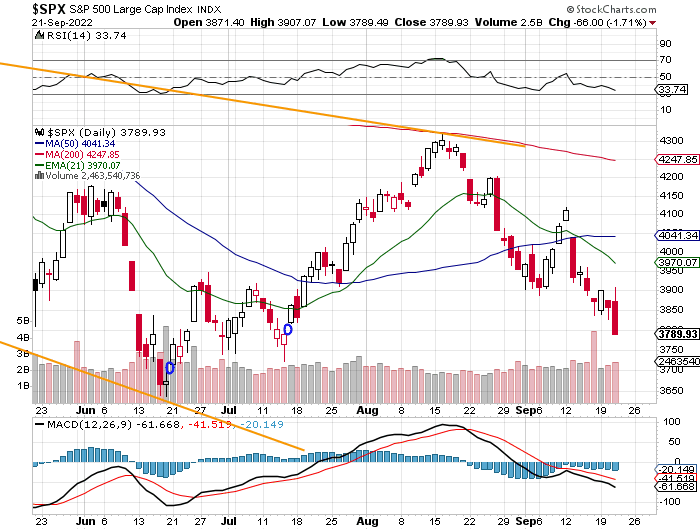 On a bright note (maybe), readers will recall the 3,796 level that I had been pointing to while the entire clown car was talking about 3,900 has been reached. The smallish gap from 3,817 down to 3,796 that had been left unfilled in July has now been filled.

My gaps are illustrated as small blue circles. Fight the Fed? You can. There is another unfilled gap (from June) between 3,707 and 3,715. Does this gap have to be filled? No. Is it likely to fill? Sooner or later, yes, it is, in my opinion, likely. If 3,707 fills, the low of June would be little more than a stone's throw away at 3,636 and perhaps a self-fulfilling prophecy by then.

Get an email alert each time I write an article for Real Money. Click the "+Follow" next to my byline to this article.
TAGS: Economy | ETFs | Federal Reserve | Indexes | Interest Rates | Investing | Stocks | Treasury Bonds | Real Money