Those words, with due credit to rocker Ozzy Osbourne, are not exactly what Federal Reserve Chair Jerome Powell told the financial press on Wednesday afternoon, but what he did say -- "Sometimes the path ahead is clear, and sometimes less so" -- might be summed up that way.

I have disagreed with decisions made as to the application of monetary policy often enough in public forums. Not this time. With the exception of the two hawkish-minded dissenters, there finally seems to be an understanding across the committee that without a repaired yield curve business investment is not going to lend the kind of support necessary to enhance the velocity of transactions, resulting ultimately in a more desirable scale of economic growth. I think the committee's voters finally do get (albeit very late) the need to pressure the short end of the curve, if the rest of Planet Earth is going to control the long end. The lack of direction in the dot plot is likely by design so as to not signal anything. Don't read too much into that. We can get rid of the dot plot as a tool intended to enhance transparency yesterday.

You'll note straight from the policy statement, right after acknowledging the strong pace of household spending, that a weakened environment for "business fixed investment" is also mentioned. St. Louis Fed President James Bullard is not necessarily wrong in making the case for a larger reduction to overnight rates; indeed, if I did not see the ugly face of consumer-level inflation hiding silently in the darkness, I would likely be in his camp.

The facts are this: August Core CPI printed at 2.4%, with the headline rate at just 1.7%. Now, we have seen just how quickly risk premium can be added to and subtracted from energy pricing. Anything can happen. Another drone attack. A military response. Bang, headline inflation starts to grow. Then high-level delegations from both China and the U.S. meet in Washington, obviously motivated to loosen the discomfort of an unfriendly trade environment. Something substantive gets done, and markets won't worry too much about what the Fed did in mid-September. Negotiations fail, however, and this time the U.S. consumer does get hit, as that's where the December tranche of tariffs are largely targeted. That hits GDP.

We do not live in a box. Fed Ex Corp. (FDX) in its earnings call made sure that investors are well-aware of the global threat to large-cap, multinational welfare. There was no truly correct call on policy that could be made on Wednesday. Given current conditions measured in relative terms to the threats apparent, this decision was probably the best one that could be made at this time in light of the lack of clarity across so many levels. In addition to the China trade situation and energy markets, there is still a U.S.-Mexico-Canada trade agreement that remains in limbo, acting as an ankle weight on economic activity. Not only should the USMCA deal be passed, but the U.K., Japan and South Korea should be mentioned as a potential expansion of this pact. Always room for more letters.

The Federal Open Market Committee (FOMC) meets again on Oct. 30. Mario Draghi's ECB meets for the last time on Oct. 24 before that central bank becomes the Christine Lagarde show. The way it stands now, the ECB will once again crank up the printing press come November. Will this action crush the long end of the U.S. Treasury yield curve? Certainly might. This is a real threat that is under-covered across the U.S. financial media. Another reason not to show too much of one's hand just yet. Oil prices spike, difficulties with China escalate and European money mangles the curve, and the consumer will be stopped in their tracks. That's when the R word returns in anger.

This is the threat environment. We really don't know just how supportive Lagarde might be of an aggressive monetary policy stance. She is an influential political type, and she may just try to lead the unwilling toward an easier fiscal stance. Stay nimble, friends, for this will be difficult. Enjoy the thrill of the challenge. They (whomever "they" might be) see you as their hero. Make it so.

That Saudi Arabia is importing oil for domestic purposes. Really.

That only 3.4 billion euros were allotted across 28 bidding banks in the ECB's Thursday morning TLTRO-III operation. For comparison, the four operations comprising TLTRO-II allotted a total of 740 billion euros, and never saw less than 200 banks bid. Is this comparison meaningful? We'll know more in December.

Less than two weeks ago, we heard from Elliott Management regarding their concern over AT&T Inc.'s (T) lack of focus on core businesses as well as the firm's apparent plan of succession. Elliot had acquired a full percent of AT&T and had some ideas. Seemingly, thing are moving quickly.

Earlier this week at the Goldman Sachs annual Communacopia media and telecom conference, AT&T CEO Randall Stephenson acknowledged a willingness to engage Elliott Management regarding the hedge fund's ideas and even offered that some of these ideas "make a lot of sense." Elliott has pushed for a higher dividend payment as well as diverting a larger allocation of free cash flow away from debt repayment and toward a share repurchase plan. Stephenson from that conference also offered that as AT&T approaches its year-end debt payment target the repurchasing of shares should become "part of the mix again."

The Wall Street Journal reports that AT&T is now exploring the potential for divesting DirecTV, which was a $49 billion investment. Considerations are for either some kind of spin-off, or perhaps dealing the unit to Dish Network Corp. (DISH) . Dish and DirecTV have tried and failed to merge in the past due to regulatory challenges, but times have changed. Satellite entertainment faces the same challenges as cable television.

All I can say is as a shareholder, it's almost always with delight that I greet news when activist investors have become involved in one of my names. Again. That was quick.

Kind of like the feeling Kiss fans get when Gene Simmons spits blood and breathes fire on stage. Oh yeah!! Just after the close on Wednesday afternoon, the news hit the tape. Oh yeah!! As of June 30, the end of Microsoft Corp.'s (MSFT) fiscal year, the 2016 share repurchase authorization left $11.4 billion on the plate. Winding down? No problem. With cash derived from operations standing at more than $52 billion for fiscal 2019 and market cap at more than $1 trillion, Microsoft plans to carry on with iits tradition of sharing good fortune with investors.

Microsoft announced after the closing bell a plan to increase the quarterly dividend from $0.46 to $0.51 (up 11%) while approving a brand-new share repurchase authorization for up to $40 billion, or roughly 3.8% of the shares outstanding. This new plan will run with no expiration date. The 51-cent dividend will pay out on Dec. 12 to shareholders of record Nov. 21. The shares will trade ex-dividend Nov. 20.

For a little perspective, Microsoft spent $4.6 billion on its own shares in the most recent quarter reported and a total of $35.7 billion from 2017 through June 2019, taking down 419 million shares of the company, which is a holding of Jim Cramer's Action Alerts PLUS charitable trust. 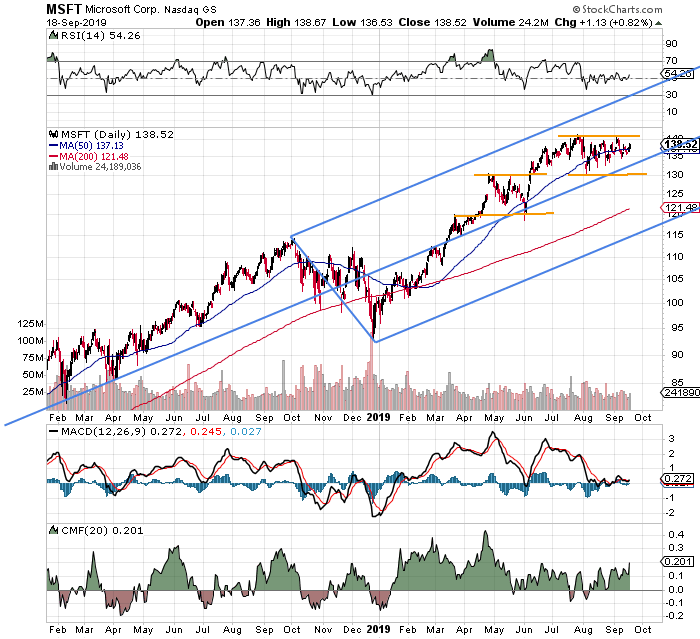 I originally drew up the above chart for you some months ago. The Pitchfork I placed upon the chart at that time remains perfect, with the shares firmly establishing residency in the upper chamber. The thing those with a good memory will notice is that I have added a second basing pattern, using the resistance level of the first as support. A zoomed-in shot (below) shows the recent battle for this name around the 50-day simple moving average (SMA). 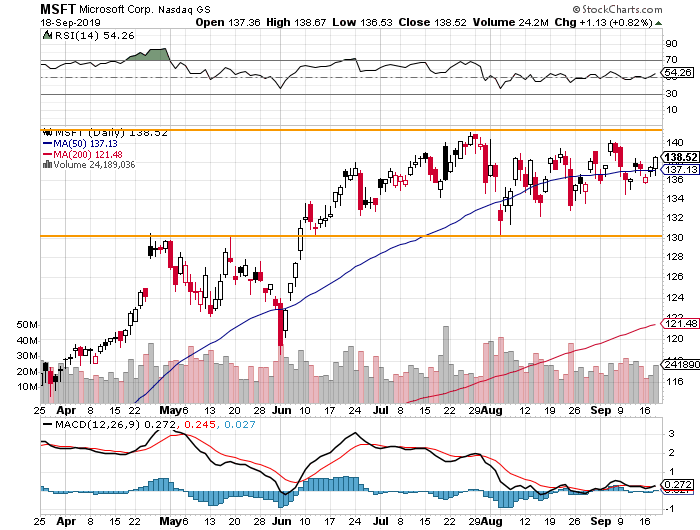 Is this news the jailbreak? Perhaps. Relative Strength has not experienced an increase out of the pedestrian in two months. The daily moving average convergence divergence (MACD) has been lackluster. Then again, software has been weak and the cloud has been wobbly... and the resurgence of Microsoft as a growth vehicle in recent years has been led by the Azure platform, so this is the kind of weakness I can live with.

No public events scheduled this day.

Get an email alert each time I write an article for Real Money. Click the "+Follow" next to my byline to this article.
TAGS: Activist investing | Hedge Funds | Mergers and Acquisitions | Dividends | Federal Reserve | Interest Rates | Investing | Stocks | Media | Software & Services | Telecommunications | Real Money | Stock of the Day