Every year. The excitement starts to build from the moment they arrive in warmer climes in order to prepare. There are some who no longer see what it is that I see. There are many who, in the era of speed and electronic gadgetry, can no longer slow their minds down enough to enjoy the intellectual purity of what it is I feel. While that in its own way, saddens, the condition is quite understandable. Things change. Time passes. That time passing, though, is exactly what makes this day as grand as it is.

Opening Day. The grass will be green. The sky will be blue. Some will play hooky. We will not. You and I may find ourselves at work today, only following our preferred teams from afar, but for those who actually do notice when a base-runner increases a lead by three or four inches, visions of box scores will dance in our heads.

The beauty of growing up in the Boroughs of New York City is just this. Everyone knows their heritage. Not ethnic heritage. Who cares about that on a day like this? Everyone here was raised by either Dodgers, Giants or Yankees fans. It connects us through generations. It brings even those long gone back just for a little while.

I will remember forever the day my Mom realized that there was not one soul left playing for the San Francisco Giants that had ever played for the New York Giants. It was the same day Willie Mays once again donned the orange NY. That day, in sober resignation, she went through my baseball cards one last time to make sure, and then told me that now, we were both Mets fans. Play ball.

There is a television commercial that I really appreciate. It is one that almost all of you have likely seen. A camel walking though an office asking co-workers what day it is. I imagine that this ad annoys enough viewers, but I enjoy it.

Today is Fed Day. As sure as the sun rises, the Bureau of Economic Analysis will publish their revised GDP estimate for the fourth quarter of 2018. Oh, there will be other data released this day, but that key slice of information is expected to be revised lower than the 2.6% seasonally adjusted and then annualized pace that it rode in on. Lagging indicator? Of course. Think it matters? The clown car is packed with Fed speakers today. I am currently tracking six, five of whom are 2019 voting members of the FOMC.

Intentionally coordinated response? Don't know. What we do know is that by the time we're back in front of our TV sets watching baseball, or some program meant to drain the human brain of what cognitive ability remains, that we will know more. We think. Which brings me to my next point.

Listen. I am not a young man. I have been playing this game professionally since the Reagan administration, and have been trading my own account since Gerald Ford lived at 1600 Pennsylvania Avenue. I have never, ever, heard anyone claim as a cause for effect, market certainty. Gee whiz. You would think these guys were the first ones that ever had to figure anything out.

If you read me, and you have made it this far... I caution on my concern over behavior on the short end of the yield curve often enough. The fact that the longer end of the curve has not significantly contracted at the same time could be telling. Could actually be medium-term inflationary after a period of slowed-to-stalled short-term growth. This will matter to everyone we know sooner or later. Will that matter to equity traders? Right now?

We'll find out when we find out. Markets were weaker than many think on Wednesday. Boeing (BA) "turned on the jets" and that gave some less-active onlookers the impression that markets closed nearly unchanged -- as the Dow Jones Industrials nearly did.

However, the Nasdaq Composite was far weaker. Money flows moved away from semiconductor and software names. Just take a look at Salesforce (CRM) : 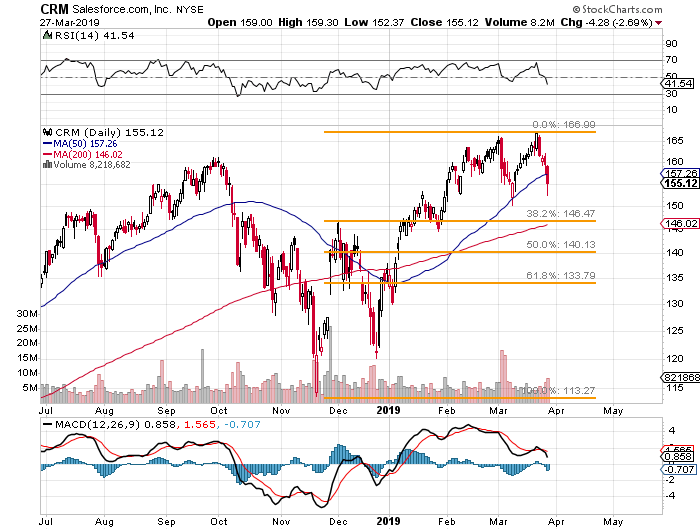 What do you see? I see a name that failed to hold the 50-day simple moving average on Wednesday. I see weakened Relative Strength. I see a daily Moving Average Convergence Divergence that just got ugly. I see a cup-and-handle formation that failed to break out due to the formation of a double top. That's bearish for the new kids. We don't have confirmation until the prior low of $150 is breached. I am long this name, probably as are many of you. That's why I mention it.

What now? Fortunately I have owned the stock for a while. My net basis is not threatened here, but I will tell you this. Should the money keep moving away from information technology, shareholders of CRM had better keep their eyes upon the 200-day SMA and the 38.2% Fibonacci retracement level. Right now, the two both stand between $146 and $146.50. That, my friends, is for me the panic point.

There are more than one 800-pound gorillas in the room. They are both drawing interest away from potential acceleration in equity prices, leaving, as I have explained, a central-bank-inspired expansion in earnings multiples as the most likely short-term catalyst for higher market pricing. What will matter, beyond a shadow of a doubt, will be first-quarter earnings, and those estimates just keep getting worse.

Unless you do something else full time, you are already well aware that across the S&P 500, first-quarter earnings expectations are now projected to post well into negative growth, meaning that large-cap U.S. corporations are less profitable in comparison to where they were a year ago. Tax comparisons are now apples-to-apples, so judgement here is fair, unlike the apples-to-oranges comparison that benefited each and every one of us over the past year.

Estimates are now, according to FactSet, for -3.7%. The S&P 500 in aggregate has not experienced a negative growth quarter in nearly three years. So it's bad, but it's not like this is Halley's Comet or anything. My concern, even if the second quarter manages to squeeze out some tiny earnings growth, is going to be year-over-year growth in revenue.

This line is not expected to compare at as much as 5% growth at any time over the coming year. Seven of the 11 sectors are expected to show negative earnings growth for the quarter, while two are, at this time, likely to post negative digits for the full year. So far, everyone looks neat and pretty for 2020. Yay for us. Election year. What a surprise.

Index ETF investors beware. Just stick this in the back of your heads. Even though the domestic economy may broadly outperform relative to global economies, that will not make the Russell 2000 a safe place to be. It's not just rising input pricing that will squeeze margin. It's about index composition. The financial sector is far better represented (almost 2 to 1, in percentage terms) across the Russell 2000 than across broader market indices. This puts an anchor on index performance in this environment that, although already being priced in, will not improve as earnings season approaches.

Jim Cramer made an excellent point in his Wednesday intro on CNBC's Mad Money TV show. Not enough is made of the negative impact that an incoming round of high-profile IPOs can have on cash flows, as active managers in need of participation make room for not only allocation, but representation in the secondary market after an oversubscribed name such as Lyft actually opens for trading.

I have seen enough of these. Cash must be created. Where from? Winners that aren't winning. Not a tough choice for a fully invested, or nearly fully invested portfolio manager. If a money-losing operation like Lyft is this hot, having to raise the range of expected pricing from $62 - $68 to $70 - $72 on 30.7 million shares, just what do you think the cash flow will be like when Uber comes to market? Pinterest most likely trades at an exchange near you by mid-April.

By the way, $72 x 30.7 million = around $2.2 billion. The amount of cash raised could reach a rough $2.5 billion if the underwriters do exercise their options. This firm lost $911 million last year. Even if that number were not to improve, it would seem that there will not be a need to return to the equity well for at least a few years.

Get an email alert each time I write an article for Real Money. Click the "+Follow" next to my byline to this article.
TAGS: Economy | Indexes | Investing | Markets | Stocks | Trading | U.S. Equity