I cannot promise you what the equity markets do from here. My guess is that equities will at least try to rally here on Tuesday morning, though S&P futures were weak overnight.

I can remind you to be frank with yourself. Yes, equity markets were heavy on Monday. There was a hint of fear in the air. Why fear? It serves no purpose. If a position provokes fear, then cut it off, or peel it back until the issue no longer clouds rational thought. You can trust me in this.

There are many ways to remove or reduce obstacles. I find that the ability to compartmentalize is key. Thought development that belongs in box A stays there, and then box B, and so on. People are different. If this is not a strength for some, if quality of life is impacted, then one is overexposed at least to that one space in that one moment under that one condition.

Part of understanding, though, is understanding oneself. Honest assessment of strengths, weaknesses, the ability to see mistakes and actually learn something. My guess is that just by being here, most of you have already developed at least some method for tackling the unwelcome. For myself, I like to slow it all down. I can only overcome if I can adapt. I can only adapt f I can identify. I can only identify if I understand.

You can do this. We can do this. Fear in its proper place can be a motivator. Fear of failure is fine. Fear cannot be part of real-time decision making. That's called panic, and panic provokes response that is rash and not well-developed.

U.S. Treasury debt securities were subject to a considerable level of panic purchasing on Monday. As we move through the zero dark hours of Tuesday morning, the yield spread between U.S. 90-day paper and the U.S. 10-year note now stands at -33.3 basis points. This is the most heavily focused-upon spread within the U.S. curve, and according to research done by the San Francisco Fed is the most reliable indicator available to the central bank in terms of the ability to predict economic contraction. The also heavily watched two-year/10-year spread remains un-inverted at +5.5 basis points. That spread is now the flattest it has been since June 2007.

I tell you the preceding to provoke fear? No. I tell you so that you understand the environment. This condition itself is a response to fear.

Is this a bond bubble? U.S. sovereign debt is still undervalued relative to the rest of the planet. No, U.S. Treasuries themselves are not the problem. Developed nations' sovereign debt? Is the whole ball of wax just one big bubble? Possibly. It has been created through the persistent refusal by the planet's key central banks to allow a globalized economy to ever truly hit bottom. What was the Great Recession, you say? Oh, it was awful, no doubt. You and I both know that this bottom was orchestrated, though. A true reset would have been, and still might be someday, far worse.

All this said, when money moves into debt markets, it must come from somewhere. The S&P 500 and the Nasdaq Composite both ran backward to the tune of 1.2% on Monday. All 11 sectors moved into the red for the day, nine of them by two-thirds of a percent or more. Obviously in this environment, the banks would be hit hard. The banks may have, due to necessity, found a plethora of ways to diversify in order to be profitable. That will ultimately matter. For now, however, market valuation still hinges on net interest margin. You can invest, but for a trade, understand that beast for what it is. The rest of the pain came from growth-reliant sectors, such as materials, energy and discretionary types. 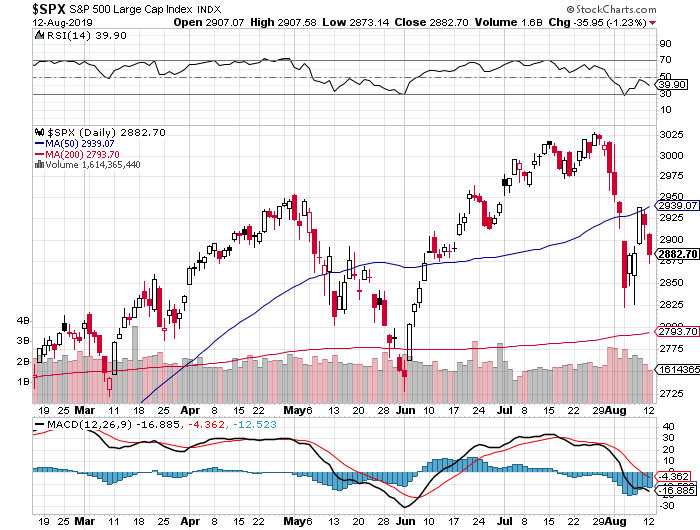 I have some good news and some bad news. First, the bad news.

You can see here that the S&P 500 closed below Thursday's low. The Nasdaq Composite is behaving similarly; no need to inundate you with charts. That's not a positive, Neither is the fact that serious resistance had been met and permitted to prevail at the 50-day simple moving average (SMA). The real danger spot would now become the lows of the Monday and Wednesday prior. That spot was twice tested, and twice supportive.

Now I know equity index futures are trading lower. They have been all over the place throughout, and I think prove one thing -- that the pajama crowd sleeps at night and, always a Wild West show, the overnight is even more so now that high-speed algorithms control even that market.

But there is some good news, possibly.

For one, the CBOE Put/Call Ratio landed at 1.16 on Monday. One easily sees that the number has printed above both the level of the 50-day and 200-day SMAs for 10 consecutive days. This is a better determinant of fear in the marketplace than is short interest, or the VIX, at this point.

This can also be considered at times a contrarian indicator.

Secondly, look back up at the chart for the S&P 500. See that volume. What volume? Seriously. For a second consecutive day, trading volume tailed off significantly for both the S&P 500 and the Nasdaq Composite as well as at both the New York Stock Exchange and the Nasdaq Market Site. Fund participation simply was not a significant factor on Monday, nor was it on Friday, both "down" days.

That either means that they are still coming (bad), or that small investors have been picked off yet again (good for the indices, not so much for the little guy).

Trouble Ahead, Trouble Behind

According to FactSet, the current blended rate (at this point 90% results, 10% projection) for the S&P 500 now stands at -0.7% earnings "growth" for the period. If the retailers and a few others don't push that number past zero, this will be the second consecutive quarter of earnings contraction (first quarter printed at -0.4%), fitting the textbook definition of an "earnings recession."

Revenue growth for the S&P 500 is still growing, albeit at 4.1%, the lowest pace of growth since the third quarter of 2016. The S&P 500 began the week trading at 16.7x forward earnings, a slight decline from the week prior. After Monday's selloff, the index likely trades this close >< to its five-year average of 16.5x. There is no danger of large-cap equities being over-valued in the aggregate at this point.

That depends largely upon the development of the global condition for commerce, as well as monetary policy. Right now the Federal Reserve is a bit behind the curve, globally, putting a drag on domestic economic growth as well as suppressing equity valuations. According to Bank of America Merrill Lynch. as profit growth has stalled, so has corporate spending. Capital expenditures (capex) are running at 3% growth for the first half of 2019, well off of the wild pace of 11% for the first half of 2018 that was fueled by tax reform.

That brings us to fiscal policy. The theory goes that you can fuel growth through expanding debt. Always worked in the past. At what point is the size of the debt and the servicing of this debt counter-productive? In May? May we never find out. That said, we are going to push the envelope a bit. For July, the U.S. Treasury reported a budget deficit of $119.7 billion versus expectations that ran from $110 billion to $120 billion. The good news is that fiscal year-to-date (October thru July) receipts are up 3%. The bad news? Outlays are up 8%.

This growing debt will eventually force the central bank to step back to the plate. It's just a matter of time. If the world is still one giant economic mess it will be necessary to focus any future asset purchasing program on the short end of the curve. Write it in stone.

U.S. Total Debt: $74 trillion (this includes you and me, businesses and local government)

All behold the mightiness of Amgen Inc.'s (AMGN) two-day run to glory.

What just happened? This is all a response to Amgen's victory in a patent case on Friday over Sandoz, a Novartis (NVS) subsidiary. At stake were two patents protecting the drug Enbrel that treats various forms of arthritis, among other ailments. Sandoz had been preparing to launch a bio-similar known as Erelzi that had already gained U.S. Food and Drug Administration (FDA) approval.

While the ruling does nothing to alter short-term earnings or revenue for Amgen, it does remove longer-term risk as these patents protect Enbrel through 2028 and 2029. Enbrel is the money machine at Amgen. That one drug generates not just 22% of the firm's total revenue, but between 25% and 30% of its operating profit. The move simply allows portfolio managers who had either held or dialed back exposure to invest freely in Amgen, which is a holding of Jim Cramer's Action Alerts PLUS charitable trust.

These shares ended the two-day run precisely at 2018 resistance. I would not jump on board here. If interested, though, I would not wait for the shares to come back to its moving averages. These managers jumped back in for a reason. On top of that, even with this spike, the shares yield 2.82%. Is Treasury Department going to pay you 2.82%? Doubt it. If this area of resistance can be taken, the shares could add 20%. I just think entry can be finessed a bit here.

There are a couple ways to go about this. Equity investors could piece in incrementally on dips. Expect one here on Tuesday morning, I would think. A trader could also grab, say, a January $220 call for $6.20 and pay for it through the sale of a January $180 put and a January $170 put for an aggregate $7.60. Just an idea that pays for a nice meal on balance.

Get an email alert each time I write an article for Real Money. Click the "+Follow" next to my byline to this article.
TAGS: Litigation | Investing | Stocks | Treasury Bonds | Pharmaceuticals | Real Money