Sticks and stones might break your bones. They say that words will never hurt you. On Monday, the president of the United States addressed the nation. He sounded good. He sounded calm. This is not a political observation. Some will only see that he sometimes struggles. Others will pretend he never does. I see what I think I see. On Monday, the president told Americans not to panic, he put off the idea of economic lockdowns, and he spoke of expediting, if necessary, the speed at which vaccine makers could adjust their jabs and get them into mass production.

It was the right message at the right time. Separately, on CNN, presidential adviser Dr. Anthony Fauci acknowledged, without confirming as fact, what we had already been told by Dr. Angelique Coetzee in South Africa, that, anecdotally, new infections of the Omicron variant in that nation might create less severe illness than what we have experienced with earlier variants. The algorithms that control price discovery seized upon that message. So it seemed.

I closed Liz Claman's show at Fox Business on Monday, meaning that I was her final interview going into the closing bell. Over the five minutes or so that I was on the air, I noticed the major large-cap indices had weakened noticeably while I was speaking. Professional money had retaken only a portion of ground lost on Friday and was already taking some profits. I thought to myself,. "Hmm, I wonder if that's going to be a problem." Long story short, it would be.

Before long, words written by both Federal Reserve Chairman Jerome Powell and Treasury Secretary Janet Yellen, who prepared their opening remarks ahead of testimony before the Senate Banking Committee on Tuesday, and words spoken by Moderna's (MRNA) CEO who did an interview with The Financial Times would hurt stocks across Asia and Europe, do a number on U.S. equity index futures markets and drive haven-seeking investors headlong into sovereign debt securities perceived as safe.

First, we'll look at Monday's rally. Sure, the S&P 500 gained 1.32% for the session as the Nasdaq Composite scored an increase of 1.88%. All 11 S&P sectors select SPDR ETFs closed in the green. I heard one anchor on a major financial network (not to embarrass that network) refer to the session's positive performance as broad, which of course, it was not.

The S&P Midcap 400 closed flat for the session, while both of our small-cap indices, the Russell 2000 and the S&P 600, closed in the red. Winners beat losers by a rough 330 names at the New York Stock Exchange (which is not a lot), while losers beat winners by almost 700 names at the Nasdaq. Aggregate trading volume increased on Monday from Friday. Given that Friday was a half day, the totals are not comparable, but bear in mind that Friday's volume was on the heavy side for a holiday session. Liquidity was not a problem on Friday. On Monday, as the marketplace rallied "broadly," advancing volume comprised just 46.8% of the composite for NYSE-listed stocks and 49.8% of the composite up in midtown. "So broad."

On Monday evening, we got a look at the prepared opening remarks that will be delivered by Fed Chair Jerome Powell and Treasury Secretary Janet Yellen to the Senate Banking Committee as part of their CARES Act hearing on Tuesday. Powell wrote, "The recent rise in COVID-19 cases and the emergence of the Omicron variant pose downside risks to employment and economic activity and increased uncertainty for inflation." Powell adds, "Greater concern about the virus could reduce people's willingness to work in person, which would slow progress in the labor market and intensify supply chain disruptions."

Yellen's remarks appear to more or less run parallel to Powell's, with her additional comment that should Congress fail to act on the debt ceiling by Dec. 15, when the Treasury expects to run out of cash, that this failure could "eviscerate" the nation's economic recovery. These remarks put immediate upward pressure on U.S. Treasury securities (downward pressure on yields). The U.S. 10-Year Note yields a rough 1.42% as I write this piece, down from 1.52% on Monday evening and 1.68% as recently as last Wednesday. As for futures trading in Chicago, they appear to still be pricing in almost a 50/50 chance of a first rate hike in June as opposed to almost a 70% probability as recently as 24 hours ago, while the likelihood of a second rate hike seems to have been pushed out from September 2022 to December 2022.

Moderna CEO Stephane Bancel spoke to The Financial Times on Monday night. Bancel was pragmatic, which after the interview hit publication was an almost immediate problem for global equity markets. Bancel said, "There is no world, I think, where (effectiveness) is the same level... we had with Delta." Bancel goes on,: "I think it's going to be a material drop. I just don't know how much because we need to wait for the data. But all the scientists I've talked to.... are like, 'This is not going to be good.'"

This statement would be in mild contrast (not outright disagreement) with what former U.S. Food and Drug Administration Commissioner and Pfizer (PFE) board member Dr. Scott Gottlieb said in an interview televised at CNBC on Monday morning. Gottlieb said, "There's a reasonable degree of confidence in vaccine circles that (with) at least three doses.... the patient is going to have fairly good protection against the variant." Just an aside, I recently read Gottlieb's book "Uncontrolled Spread," and while stopping short of creating Sarge's Book Club, I would recommend the book to anyone interested in learning more about just what the heck was going on in this country early on in the pandemic.

Pfizer, Pfizer's partner BioNTech (BNTX) and Moderna are all working on adjusted vaccines that would target the new variant. Bancel commented on just how long the process could take. He said, "(Moderna) and Pfizer cannot get a billion doses next week. The maths (math) doesn't (don't) work. But could we get the billion doses out by the summer? Sure." Bancel goes on to predict that Moderna could produce anywhere from 2 billion to 3 billion doses by year-end 2022.

News has been breaking throughout the morning here on Tuesday. First, word spread across the Twitter-verse that the head of an European Union's Public Health Agency had commented that the severity of disease in new infected cases of the Omicron variant were mild in the EU. I have not seen any confirmation of this as hard news nor an actual quotation credited to an actual individual, but this news/rumor did take equity index futures off their overnight lows.

A short while later, The Wall Street Journal reported that preliminary tests separately have indicated that the COVID-19 antibody cocktails produced by both Regeneron (REGN) and Eli Lilly (LLY) are probably less effective against Omicron than they were against prior variants. It may or may not be important to note that Eli Lilly has not yet released results from its own study. Those results were done by outside sources.

Oh, there's one other thing probably impacting markets this morning. On Monday, Senate Majority Leader Chuck Schumer stated that his goal was to finish (adjusting?) and pass by Christmas recess the president's roughly $2 trillion tax and spend package that has already passed in the House.

Moderate Sen. Joe Manchin has responded that he is still going through the bill and cannot commit to a timeline. Manchin stated, "The unknown is great right now, and it gets greater. Inflation is now more than transitory. We found out it's not transitory. And on top of that, you have this new strain of COVID they're very much concerned about."

Last Wednesday, it was made public that Microsoft (MSFT) CEO Satya Nadella had sold 838,584 shares over two days, which amounted to almost half his stake. The trades yielded a rough $285 million for the CEO that, according to a Microsoft spokesperson, was raised for personal financial planning and diversification reasons. Others cite a coming 7% long-term capital gains tax on anything exceeding $250,000 for residents of the state of Washington that goes into effect at the start of the new year as a provocation for the timing.

I, like many of you, have almost cartoon-like profits to protect in this name. So what now? I do believe that Nadella will still be at Microsoft going forward. I think the state capital gains tax probably does make sense for the timing, and diversification would be a legitimate catalyst for the sale in the first place. Microsoft has continued to perform and even out-perform at an elite level. I definitely do not want to exit the name. Let's take a look at the chart of Microsoft, which is a holding of the Action Alerts PLUS portfolio. 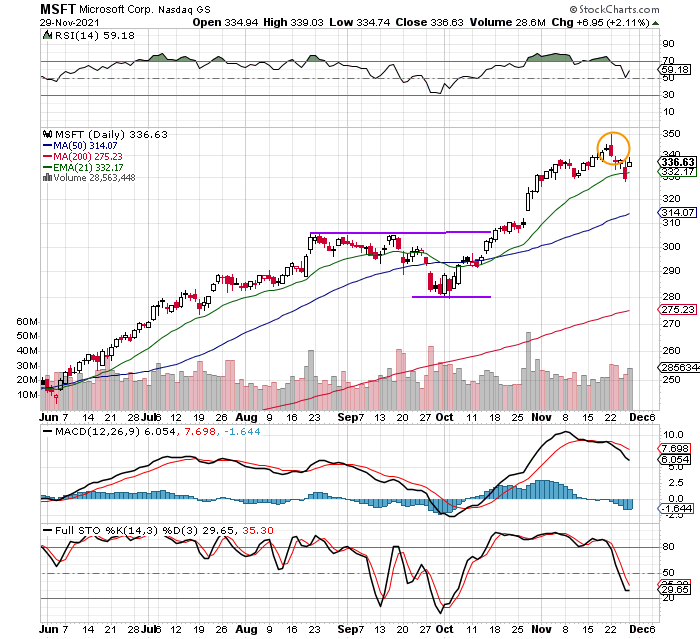 Readers will see the breakout of that $305 pivot created by the August-through-October base. This produced the rally that appears to have peaked with the highs of mid-November that really looks like an "evening star" if one ignores the high of the third day of that pattern. That day was still a "down" day. I think it counts. That said, that ship has also sailed. MSFT is almost 4% off of that high and is now in a better place technically.

Over just a few sessions, Microsoft's Relative Strength has gone from almost permanently overbought to neutral. The Full Stochastics Oscillator now approaches oversold territory, as the daily moving average convergence divergence (MACD) is still reacting to a bearish crossover of the 26-day exponential moving average by the 12-day EMA. That said, both of those moving averages remain extended.

Get an email alert each time I write an article for Real Money. Click the "+Follow" next to my byline to this article.
TAGS: Federal Reserve | Investing | Politics | Stocks | Technical Analysis | Treasury Bonds | Pharmaceuticals | Software & Services | Real Money | Coronavirus