Density in the soil. Humidity. Distance between strides. Definition. Tells you more than you think. What are you tracking? How heavy is it? How fast was it moving? Was it stalking? Or was it fleeing? Are you stalking? Or the fuzz on the back of your neck stiffens. You realize that you are almost certainly being watched, probably by a large predator. How foolish? How foolish to think I was top of the food chain all the way out here, all by myself. Slowly, the hand slides down to the Ka-Bar knife hanging off of the right hip, unfastening the sheath. Barely moving.

Equity markets tried three times on Monday to put a rally to the tape. One such spate of active pricing came over the final few minutes of the trading day, as everyday Americans deprived of the ability to feed themselves and their families were once again stymied by those in D.C. who just cannot get their acts together at a time that an entire economy has been forced into a deep state of slumber in response to a legitimate health scare. (Without making a political statement supportive of either side here... "You've gotta be kidding me!")

Not exactly. More like a sign of China trying to get that nation's industrial base back to work. The Chinese government has indicate that the lockdown of the city of Wuhan, where this all began, will be lifted on April 8. What happens in U.S. markets as investors look toward a reopening of the Chinese economy is that semiconductors get hot.

That's exactly what happened here on Monday. That's precisely why both the S&P 500 and Dow Jones Industrials gave up roughly 3%, while the Nasdaq Composite barely gave up any ground at all. Digging just a little further, the Nasdaq 100, which is even tech-heavier than is the Composite, did close in the green, while the iShares PHLX Semiconductor ETF (SOXX) popped 3.4%. 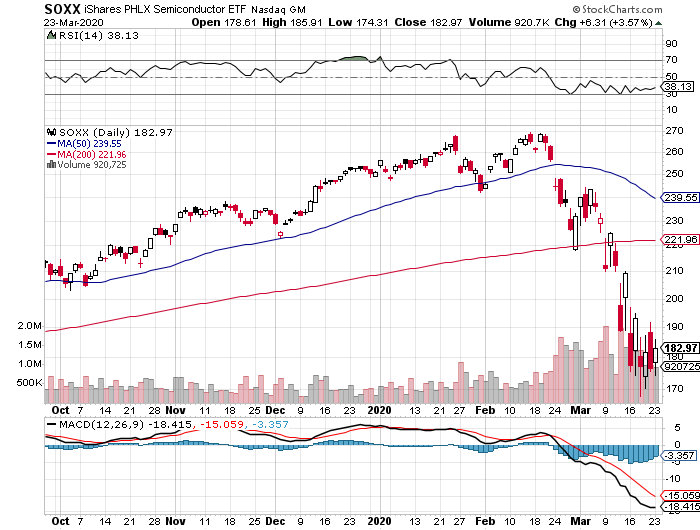 What those trading the group look for now, illustrated through the SOXX ETF, would be (underneath the chart) a bullish crossover of the daily Moving Average Convergence Divergence. Though with all three exponential moving averages trading well below zero, I might trust the crossover less than I would under normal circumstances.

It all begins with the faintest of confirmations. The baby step would, for newer traders, be a move by the 12-day Exponential Moving Average (black line) over the 26-day EMA (red line) -- if we can get a little help from Congress. As readers can easily understand, a move of the faster line (12 days) over the slower line (26 days) often signals a change in momentum. Day traders use these averages using units measured in minutes instead of days. When I need to try to pad my P/L on a bad day, I pick a volatile name, and go to the three minute chart. Doesn't always work. Just feel that it gives me a chance to fight back. Just an aside. No promises.

Just wow. One thing that you have to say about this Fed is that under Jerome Powell's leadership, the Fed has attacked developing problems involving frozen liquidity and issues in the movement of credit in about as real-time as any Fed we have ever seen. As our legislative leadership somehow continues to fail to react to a broadly suffering populace, Jerome Powell and his central bank of been as proactive as I really think they could have been in the face of sudden economic catastrophe.

The kitchen sink? Yes. The cupboards too. On Monday, the Federal Reserve re-launched TALF, the Term Asset-Backed Securities Lending Facility as a means to support consumer and business credit issues. This enables investors to purchase securities backed by measures of consumer debt, even revolving debt. The Fed also takes steps now to offer four-year bridge loans to corporations in need of new financing as long as they are investment grade and willing to limit share repurchase programs and dividend payments. Plus, the central bank will be willing to purchase high-quality, already-existing corporate credit, and this will include certain ETFs. Yes, ETFs (Exchange Traded Funds) that track the corporate bond market, not equities. This is a market that has seen severe disruption of late, and I think we can all agree that these are wise moves made by the central bank.

Lastly, this central bank has decided to buy whatever it has to, as the need to maintain order in markets and the financing of an imminent change in fiscal policy stare a troubled nation in the face. The floors of $500 billion in Treasuries, and $200 billion in mortgage backed securities are last week's roast beef. The Fed now has no caps, no targets. The Fed is going to do what the Fed has to do. Period.

If all goes according to plan, and let's face, it, plans change constantly, the Fed will purchase $375 billion in Treasury securities this week alone, while tacking on $250 billion in MBS. The balance sheet? Not right now, kid, we're busy. The Fed may, no, the Fed will, have to do a lot more.

We have all heard of "Operation Overlord", as the Battle of Normandy is often referred to. A massive allied airborne and amphibious assault aimed at freeing Western Europe from the shackles of tyranny. It was launched on June 6, 1944, and by August, more than two million allied troops would occupy France. The D-Day invasion itself? The largest seaborne invasion in global history was known as "Operation Neptune."

Ever train for amphibious assault? It really stinks. Coming off of a landing craft with 120 pounds on your back... poof... the water is over your head. You can't breathe. The waves won't stop. All with nobody shooting at you, making the June 6 landing all the more incredible. You crawl through the sand, 300, 500 yards or more. Anything to reach a berm or a tree-line.

Those two million troops don't free France if no one establishes a beachhead. We may need to establish an economic beachhead. You guys watch Jim Cramer on Mad Money last night? Silly question. Of course you did. The Fed cannot do this alone. Fiscal support can only be expected to support hundreds of millions of people for an instance in time. Next month beckons quickly.

"We cannot let the cure be worse than the problem itself." --President Donald J. Trump

"I'm very proud of the measures being taken to address the public health crisis. But, I'm also very aware that it is unsustainable to run this state and run this country with the economy closed down." --NY Gov. Andrew Cuomo

Never thought you would see a prominent Republican leader and a prominent leader of Democrats basically think the same thought, did you? Can't say that anymore. So, what is the answer. Choose public safety? Choose economic performance? Can economic performance even be saved at this point? Yes, people will go to work who are not working right now, saving jobs. That said, large swaths of the population will still avoid public contact. There will be less travel, less recreation, far smaller attendance at ballgames or shows. Of that, I have no doubt.

Taking steps to get the economy moving does not stop a recession. That's already on the tape. Does it stop something far worse? Would good folks die in greater numbers from poverty or isolation than from exposure to this virus? I really do not know. What Jim suggested last night on his show might work. The quarantining of those older than 65 years of age, or known to have underlying issues with their health. Weekly testing for Covid-19 at workplaces once the tests that can provide a rapid result are broadly available. This might allow the labor force to work without fear, or allow consumers to interact with that labor force, also without fear. If one week, an individual tests positive.. quarantine.. and notification.

Perfect solution? We don't have one of those today. A lengthy era of economic despair? We may have to form a beachhead.

Gilead Sciences (GILD) made the announcement on Monday. The firm could no longer continue to fulfill many compassionate-use requests for the experimental Remdesivir treatment for Covid-19. While the firm is working toward filling two studies for patients in the U.S. with moderate and severe symptoms of the infection. The firm has also been trying to provide the drug (that was originally used to target HIV) to patients throughout the U.S., Japan, and much of Europe through the compassionate-use program.

The firm will now try to transition toward a broader access program for patients in need, but will have to stop accepting new individual requests for the time being. The firm has stated that pregnant women and children under 18 years of age suffering from severe symptoms would be exempt form the halt during this transition.

In the meantime, Regeneron (REGN) continues to work toward a treatment, while a nation places some hope in the malaria drug known as hydroxychloroquine, which has been around since 1955. Teva Pharmaceutical Industries  (TEVA) has donated 6 million doses of hydroxychloroquine to U.S. hospitals, while Mylan (MYL) has restarted production of this drug at its West Virginia location.

I've got my eye on BP (BP) . Once this stock gets back into the low to mid-$20s, I'll be whole -- not including dividends -- making the entire venture if not worth it, at least profitable. We see a few bucks in this name and I am outta here, probably just above $23 if I can get it. Probably not today. Maybe amid a broad rally inspired by a fiscal pop.