It has been a while since we last reviewed the charts and indicators of Facebook Inc. (FB) . We last looked at FB back on July 27 and wrote that,"FB is loved by many and also has plenty of detractors. Advertisers can put their hands on their hips and take symbolic stands but they cannot ignore that this is the place to reach customers. The charts and indicators suggest that prices can move higher from here. Trade from the long side risking a close below $220."

What do the charts look like now that the company is back in the news?

The shares stayed above our stop out point and rallied to around $300 by late August. A correction in September halted in the $250-$240 area and prices have crept higher into October.

In the daily Japanese candlestick chart of FB, below, we can see a possible top reversal pattern on Monday-Tuesday-Wednesday. A possible "evening star" but with a spinning top on Tuesday. Prices have declined back below the rising 50-day moving average line.

The Moving Average Convergence Divergence (MACD) oscillator moved to a sell signal in late September and is now just barely above the zero line.

In the weekly Japanese candlestick chart of FB, below, we can see more upper shadows on the chart in the past three months than the past year or more. Traders are rejecting the highs. The 40-week moving average line has a positive slope. The trading volume has been flat in recent months when we would have preferred to see a rise.
The OBV line has edged higher but looks weak when compared to the price action. The 12-week price momentum study has been weakening since June and diverges from the price action.

In this daily Point and Figure chart of FB, below, we can see a potential price target in the $308 area but we can also see an area below the market where there is a lack of support. Weakness below $258 might precipitate further declines. 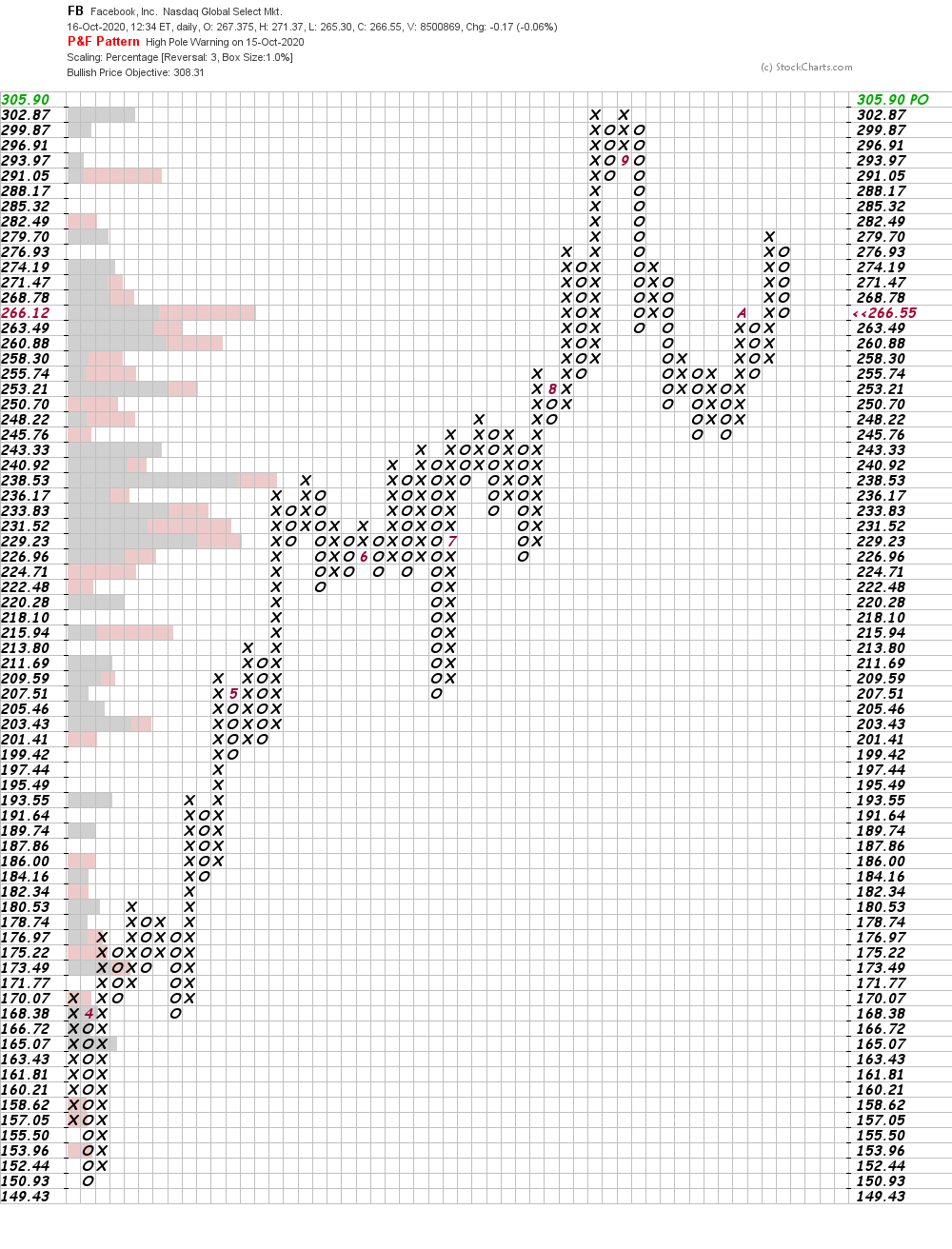 In this weekly close-only Point and Figure chart of FB, below, we can see an upside price target of $295, which is less than the target on the daily chart.

Bottom-line strategy: The charts of FB are not outright sells but the clues we get make us question the upside. Raise stop protection on longs to a close below $255.

(Facebook is a holding in Jim Cramer's Action Alerts PLUS member club. Want to be alerted before Jim Cramer buys or sells these stocks? Learn more now.)

Get an email alert each time I write an article for Real Money. Click the "+Follow" next to my byline to this article.
TAGS: Investing | Politics | Stocks | Technical Analysis | Media | Advertising

Jim Cramer: The Market Now Acts Like a Market of Stocks Than a Bushel or a Peck

There was a period before the time of commoditization where individual elan and corporate dominance meant something. And that's back.