The charts of Facebook (FB) are "interesting" at this point in time and so is the news that the company is facing an antitrust suit brought by the Federal Trade Commission (FTC) and a coalition of 48 state/territory AGs. A triangle formation has been unfolding since August and we could be close to a breakout. The $64,000 question is the breakout going to be on the upside or the downside?

Let's check out the charts to see what clues we can uncover.

In the daily bar chart of FB, below, we can see lower price highs since late August and higher lows from late September. The trading pattern has gotten tighter and tighter between highs and lows. Trading volume has diminished over the past three months or so and that is typical during triangles. The On-Balance-Volume (OBV) line shows a slight decline from late August suggesting that sellers of FB have been slightly more aggressive.

The Moving Average Convergence Divergence (MACD) oscillator has been hugging the zero line since late September.

In the weekly Japanese candlestick chart of FB, below, we see a mixed picture. In the past four months it looks like there are more upper shadows than lower shadows. This observation is subjective but if it is correct then we are seeing more rejection of the highs than rejection of the lows. This means the path of least resistance could be lower.
The slope of the 40-week moving average line is still positive and the weekly OBV line has leveled off. The MACD oscillator is in a bearish decline.

In this daily Point and Figure chart of FB, below, we see a different picture of the price action. If we draw a horizontal line through the $276 level -- the approximate midpoint -- we actually see more price activity (X's and O's) below the line than above it. This would suggest we have been seeing more buying on weakness than selling on strength. 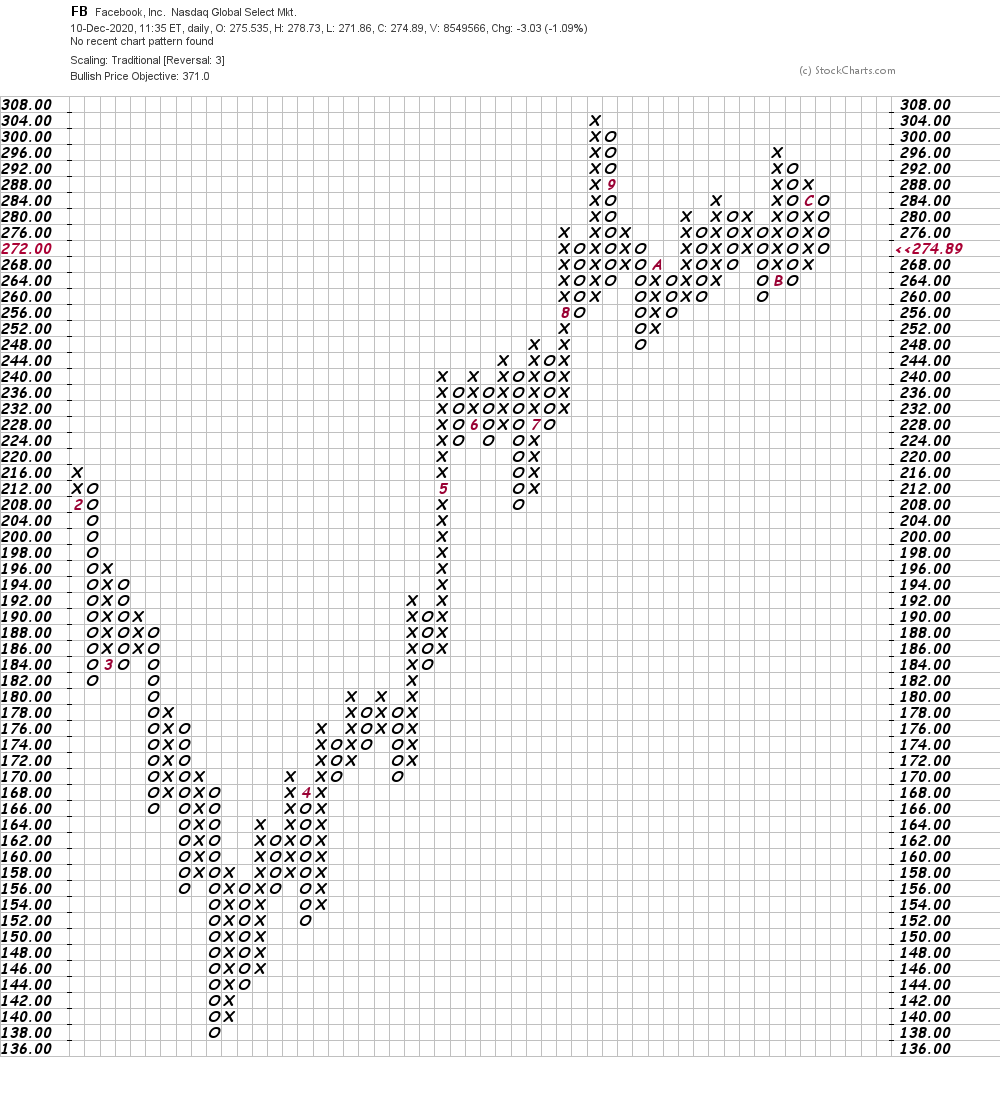 Bottom-line strategy: I have no idea what will become of the FTC suit and how fast it could develop. Two of the charts above are weak but the Point and Figure chart suggests strength ahead. No one ever said forecasting was easy. A decline to $256 is likely to weaken the picture and could precipitate further declines.

(FB is a holding in Jim Cramer's Action Alerts PLUS member club. Want to be alerted before Jim Cramer buys or sells this stock? Learn more now.)

Get an email alert each time I write an article for Real Money. Click the "+Follow" next to my byline to this article.
TAGS: Litigation | Investing | Stocks | Technical Analysis | Media | Advertising