Facebook Inc. (FB) has been out of favor since late July. Investors and traders were rudely awakened with a huge downside price gap or price void. After trading straight up from $150 to short of $220 in less than four months, the gap erased nearly half of the advance on the opening. FB bounced for about a week as the "buy the dip" mentality returned, but prices continued to sink. A small rebound in November could extend further or further losses may lie ahead. Let's see what strategy makes sense for Facebook, which is a holding of Jim Cramer's Action Alerts PLUS charitable trust.

In this daily bar chart of FB, below, we can see little in the way of constructive action. Prices are still in a downtrend below the declining 50-day moving average line. The slower-to-react 200-day line peaked in August and now has a bearish slope. The daily On-Balance-Volume (OBV) line shows an abrupt turn to the downside in late July as investors sold FB heavily. The OBV line showed some improvement in November, which could suggest that prices are now attractive enough for buyers to become more aggressive. The trend-following Moving Average Convergence Divergence (MACD) oscillator shows a cover-shorts buy signal in November and others since August.

In this weekly bar chart of FB, below, we can see that prices had a great run from early 2016. Unfortunately, prices broke their uptrend this year and are trading well below the declining 40-week moving average line. The weekly OBV line does not look as bearish as the daily line but it has rolled over slowly to the downside, suggesting selling and liquidation. The weekly MACD oscillator is far below the zero line, but it has begun to narrow toward a possible cover-shorts buy signal.

In this Point and Figure chart of FB, below, we can see an upside price target of around $166. A rally to $166 would be welcomed by the longs, but it would leave us short of the bearish 200-day moving average line. 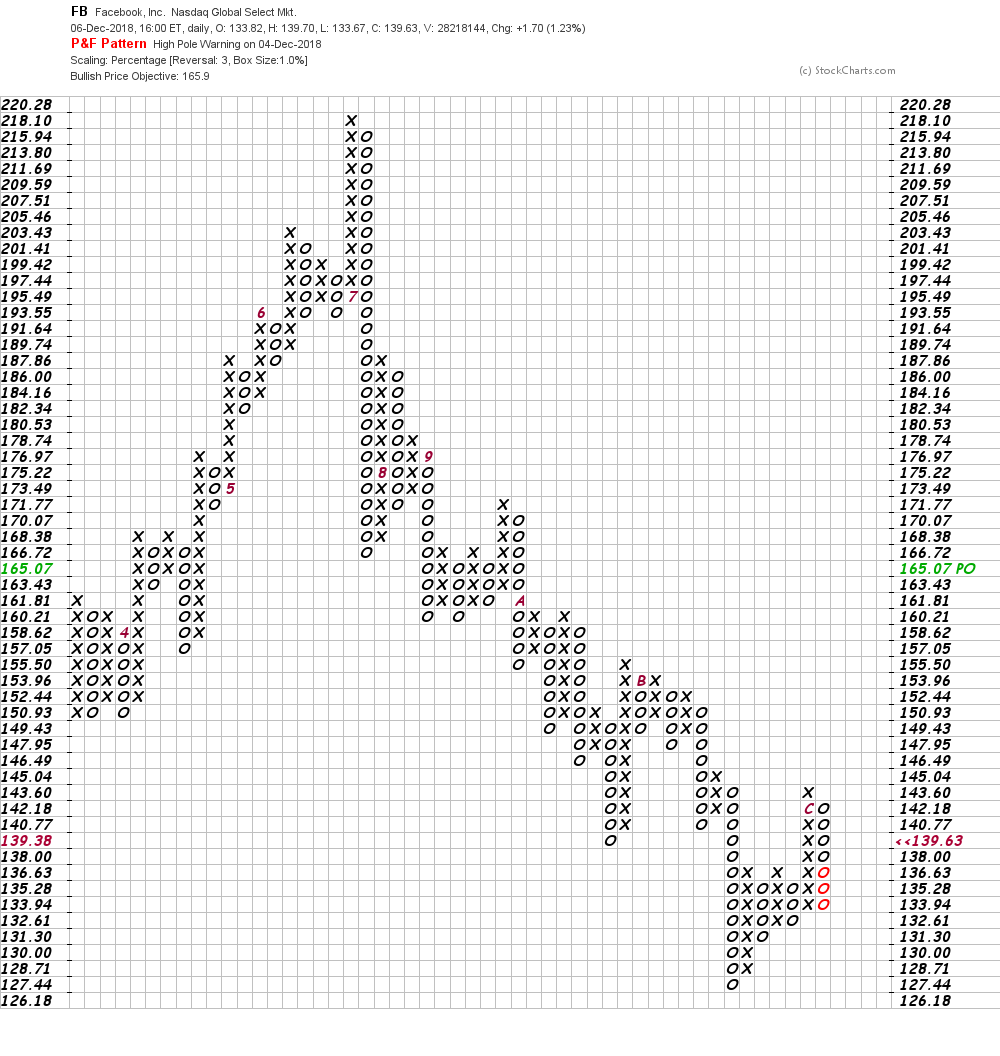 Bottom line strategy: FB went from over-loved to under-loved (I can't say hated just yet). Some small green shoots are poking through, as prices have not broken their November low and the OBV line has improved; also, the Point and Figure chart gives us an upside price target. These small improvements could mean a technical rally for the next few weeks. A close below the November low is your risk point.

Get an email alert each time I write an article for Real Money. Click the "+Follow" next to my byline to this article.
TAGS: Growth Investing | Investing | Stocks | Technical Analysis | Consumer | Digital Entertainment | Media | E-Commerce | Real Money | Stock of the Day