Regular readers will likely remember the pairs trade that I discussed back in mid-December. The idea at the time, was to get out of Chevron (CVX) , and into Exxon Mobil  (XOM) at a one to 1.7 ratio to capture a higher dividend yield on more shares. Well, the creative part of the trade worked the way it was engineered.

Exxon Mobil will pay a quarterly dividend of 87 cents on March 10 to shareholders of record on Feb. 11. Getting out of Chevron was a great idea. Exxon Mobil? Uhm, let's just say they gave up just a little bit more than the 87 cents was worth. Should have bought groceries with the proceeds from the Chevron sale.

Exxon Mobil reported the firm's fiscal fourth quarter last Friday. Adjusted earnings per share hit the tape at 41 cents, that was a miss. Revenue did grow 3.3% year-over-year, and did beat consensus. The problem was in the profitability. Fiscal 2019 decreased by an astounding 31% to $14.3 billion. Conversely, capital spending expanded greatly, by 20% to $31 billion. The revenue had indeed been up for the quarter, but it was lower for the year, down 9%.

It's not just the lousy profit picture. The firm posted its third least profitable year in 2019 since the turn of the millennium, but prospects for both the firm's and the stock's immediate future suddenly seem far more trying than in recent years.

First and foremost, it seems highly unlikely that the planet will turn completely away from fossil fuels this year or next -- it will likely be a lengthy process. That said, there has clearly been a lower multiple assigned to the entire energy sector by Wall Street. Portfolio managers just no longer have an appetite for these types of corporations. In investing, environmental, social and corporate governance is for real, and backed up by actions now being taken by large investors such as BlackRock's (BLK) Larry Fink and leaders such as Microsoft's (MSFT) who is trying to take his entire firm carbon net-negative to the point of eventually removing all of the firm's emissions since its inception in 1975.

As if an already troubled environment were not enough, the energy space has been at the epicenter of the coronavirus that has spread through China to -- so far a much lesser degree -- the rest of the world, as demand for oil from China has dropped by an estimated 20%, or about 3 million barrels per day. China is the world's largest importer of oil, so this is a shock to the demand side of energy markets on a global scale.

There is some thought that OPEC+ -- Organization of the Petroleum Exporting Countries, plus its non-OPEC oil producing counterparts -- could come to the rescue with an emergency production cut, but there appears to be little consensus among the group on going that route. The Saudis and the Russians have been in regular contact in recent days on this matter. If there is decision to meet early, the group's next meeting would be over March 5 to 6.

The other shoe dropped on Monday morning. Goldman Sachs analyst Neil Mehta, who rates four stars on TipRanks, downgraded XOM to Sell from Hold, and took his price target down to $59 from $73. Part of Mehta's thesis for the downgrade was based on a "challenged" outlook for free cash flow. Mehta also questions the firm's long-term returns on capital employment. My question is if free cash flow falters, then what happens to that fat dividend? That's the only reason I'm here. Pitter-patter? Hmm, not till I see my 87 cents.

What I see is a descending triangle that I failed to recognize prior to the January collapse in share price. 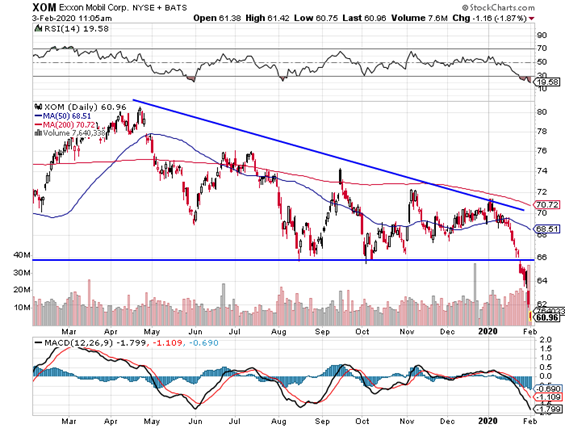 I actually thought that I saw a basing pattern. So what now? At negative 10% on the name? The shares could go to $54 in my opinion. They do not have to. Like I told you, I am hanging out for my 87 cents. That means I make a decision next week. In the meantime, writing March 20 XOM $62.50 calls for a rough 95 cents doesn't seem like the worst idea.

Get an email alert each time I write an article for Real Money. Click the "+Follow" next to my byline to this article.
TAGS: Investing | Oil | Options | Stocks | Energy | Renewable energy | Oil Equipment/Services | Stock of the Day